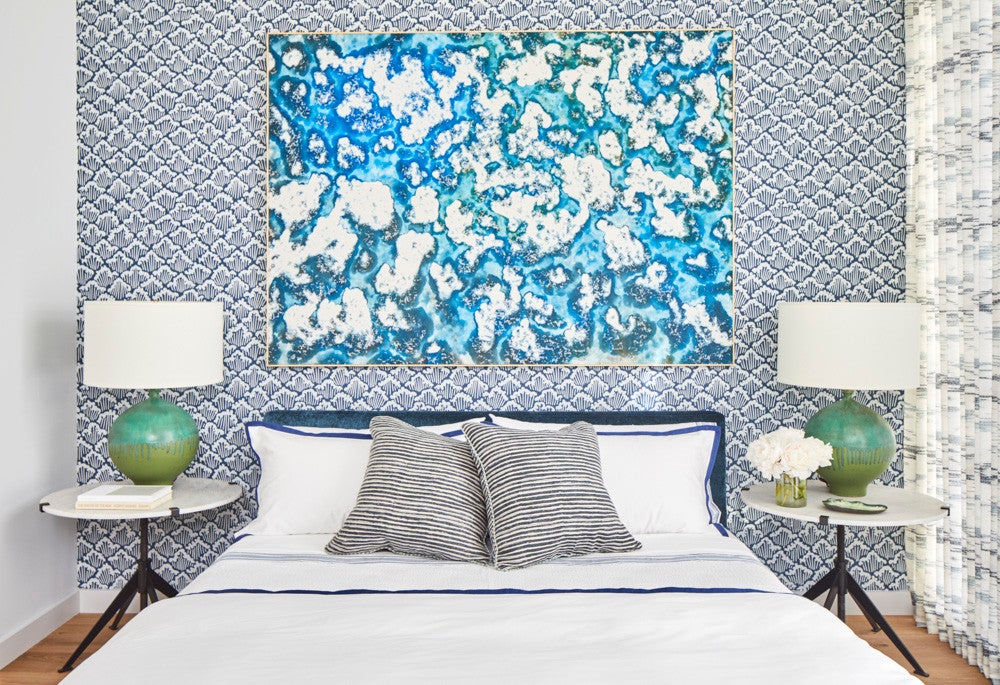 When Domino enlisted the design firm Hernandez Greene to decorate two model units at the Manhattan condo building Citizen360, they were hardly at a loss for inspiration. “The space gives you a lot to start with, as there’s a tremendous amount of light,” says Joshua Greene, one half of the firm. The firm’s other half, Katrina Hernandez, echoes the sentiment. “In our initial take, we noticed the high ceilings, the feeling of spaciousness,” she says. “The scale is so grand.”

The team was tasked to design two of the building’s 84 units: 25A, with four bedrooms, and the three-bedroom 25B. They wanted both to appeal to the families typically drawn to the Upper East Side. “The spaces struck me as the most ideal apartment for a family,” Hernandez says, given the numerous bedrooms (for a New York apartment, at least) and the sizeable common areas.

[In this photo: The kitchen towel is from ABC Home; all bowls from Crate & Barrel; marble vessels from CB2; cutting boards from West Elm; cooking books from Strand Bookstore; light fixture from Circa Lighting.]

The building is located at First Avenue and East 89th Street, in the Yorkville neighborhood of the Upper East Side. It’s one block from the new Second Avenue Subway, bringing in a new pool of buyers that developer Anbau hopes to attract with Hernandez Greene’s design.

[In this photo: The wallpaper is Lotus BP 2007 by Farrow & Ball; window treatment from Smith & Noble; upholstered bed from Avery Boardman; mattress from Mattress Firm; nightstands and mirror from CFC; bedding and throw from Serena & Lily; throw pillows from Zak & Fox; rug from Loloi Rugs; chair from Noir; pillow on chair from Walter G; basket from Land of Nod; lighting from Circa Lighting]

“Their designs are fresh, inspiring and attainable,” says Beth Fisher, the Senior Managing Director at Corcoran Sunshine, who is now marketing the apartments. “One model relies upon their creative use of textural and the other upon rich materials and color, so they will be a lot of fun to showcase to our buyers,” she adds. “Citizen360 appeals to smart and sophisticated buyers; Hernandez Greene’s models align perfectly.”

SHoP Architects designed the 34-story tower, which will feature a woven facade when it wraps construction this summer. Pricing for the one- to four-bedroom units ranges from $2.14 million to over $6 million.

[In this photo: The walls are painted Wimborne White 239 by Farrow & Ball; artwork courtesy of ACA Galleries, New York; chandelier from Circa Lighting; dining table from CFC; dining chairs from Crate & Barrel; vase from CB2]

The firm played off the palette set by Citizen360’s interior designer, Clodagh, while also tapping into its own philosophy of “modern luxury” design. “Clodagh has a natural, zen approach to interiors,” Hernandez says. “We wanted to honor her elements.”

The overlapping design by Hernandez Greene was kept bright and unfussy, rather than cluttered or overly elaborate. “Chic, clean, and approachable,” as Greene puts it. “We are on the Upper East Side, there probably will be families living here, so we wanted it to look aspirational, but also comfortable,” he says.

[In this photo: The walls are painted Wimborne White 239 by Farrow & Ball; artwork courtesy of ACA Galleries, New York; window treatment from Smith & Noble; rug from Loloi Rugs; sofa from from Avery Boardman; pillows from Walter G; throw from Serena & Lily; chairs from CFC; coffee table from CB2; side tables from Noir; table lamps and chandelier from Circa Lighting; coffee table books from Strand Bookstore; tray from The Lacquer Company]

As any New Yorker knows, aspirational living in the city is all about views. The model units feature ten-and-a-half foot tall windows that are “truly floor to ceiling,” Greene says. “You feel like you’re up in the sky.”

With such tall windows, under high ceilings, the lighting had to stand out, too: “We needed to go very large on the fixture size to make an impact,” Hernandez explains. Two uniform ceiling fixtures, which hang from both living rooms, were sourced from Circa Lighting.  Two watercolor paintings, by artist Marlene Tseng Yu, were stacked floor-to-ceiling to accentuate the ceiling height between two windows.

Window treatments, all by Smith & Noble, were kept to sheer, light fabrics. While the windows in both apartments served as design inspiration, Hernandez Greene distinguished each through varying color palettes.

[In this photo: The wallpaper is Lattice BP 3501 by Farrow & Ball; sofa from Room & Board; pillow from TRNK; throw and rug from Serena & Lily; artwork courtesy of ACA Galleries, New York; side table from Made Goods; table lamp from Circa Lighting; books from Strand Bookstore; vessel from Noir]

Apartment 25A is layered in neutral tones of creams, whites, and greys, with subtle wall colors sourced from the paint company Farrow & Ball, which also supplied the wallpaper. Hernandez’s favorite space in the apartment is the study, located behind pocket doors off the living room. “I love how cozy it became, even though it’s in a very neutral apartment and everything is in a soft palette,” she says.

Burled wood side tables, by Made Goods, flank a sofa by Room & Board and chairs by Avery Boardman, and complement the chunky, braided abaca rug by Serena & Lily. Hernandez Greene sourced the artwork for both apartments from ACA Galleries, based in Chelsea, and chose two caramel-colored, coffee-stained prints for the study space. A cream-and-white wallpaper with a latticework print lines the wall behind the sofa. “We layered the room’s patterns but kept everything to a neutral palette,” Hernandez says. “It has a really indulgent feeling.”

[In this photo: The walls are painted Pointing 2003 by Farrow & Ball; artwork courtesy of ACA Galleries, New York; dresser from Noir; lamp from Circa Lighting; books from Strand Bookstore]

Although Hernandez Greene stuck to a neutral palette throughout all 2,682 square feet, they experimented with ways to make statements in each room. Artwork, from photography to paintings, was hung to accentuate the high ceilings.

The firm also focused on a mix of textures and upholsteries for each bedroom. The Avery Boadrman bed in the master bedroom is lined with bedding by Serena & Lily and pillows by Zak & Fox and Walter G.

[In this photo: The wallpaper is Lotus BP 2007 by Farrow & Ball; upholstered bed from Avery Boardman; mattress from Mattress Firm; nightstands and mirror from CFC; throw from Serena & Lily; throw pillows from Zak & Fox; books from Strand Bookstore; vase from West Elm; lighting from Circa Lighting]

That’s reflected in brighter window treatments, also by Smith & Noble, and the rugs, by Loloi and Serena & Lily. “We went a bit midcentury, pulling in blues and striking greens,” Hernandez says. “And we grounded the living room in golds and yellows.” The artwork selected, too, makes a stronger statement.

[In this photo: The walls are painted Wimborne White 239 from Farrow & Ball; artwork courtesy of ACA Galleries, New York; dining table from CFC; dining chairs and kitchen large vessel from Noir; lighting from Circa Lighting; kitchen bowls from Crate & Barrel and CB2.]

Custom pieces in this living room, like a turquoise sofa and chairs, came from Avery Boardman. To balance the bursts of color from the artwork, and a rug by Loloi, “we wanted to keep the chairs pretty neutral,” Hernandez explains. Greene adds that they stuck to  “traditional shapes” when it came to the furniture.

advertisement
The master bedroom in this apartment (lead photo) is one of Greene’s favorite spaces, with the bedding and throw by Serena & Lily, the chair, dresser and side table by Noir, and the lamps by Circa Lighting. “The fabric combination looks kind of funky, with different patterns going on, but it doesn’t feel overpowering,” he says. Hernandez Greene then layered those textures and colors with a wave-print wallpaper, set behind the headboard. “It set the tone for the room,” Greene says. “Since the space is really busy, we kept the wallpaper on just the headboard wall.”

[In this photo: The wallpaper is 17234 Sheer Ikat/Pewter by Smith & Noble; window treatment is Bamboo BP 2107 from Farrow & Ball; bed frame from CFC; mattress from Mattress Firm; bedding and rug from Serena & Lily; throw pillows from Walter G; lamps from Circa Lighting; dresser and nightstands from Noir; book from Strand Bookstore]

Hernandez Greene only had a month to accomplished the project, but weren’t fazed by the timeline. “We’re really quick and good under pressure,” Hernandez says. “This was just a test of our project management skills. But we developed the concepts, took it and ran,” she says.

They’ve left with a few design tips for future residents of Citizen360, as well. “Start with the window treatment first,” Greene recommends. “It’s the most important architectural element in each of the rooms. I think that’s why our design appears so clean, because we focused on them.”

[In this photo: The walls are painted Elephant’s Breath 229 from Farrow & Ball; wallpaper is Lotus BP 2017 from Farrow & Ball; window treatment from Smith & Noble; upholstered bed from Room & Board; mattress from Mattress Firm; nightstands from Noir; table lamps from Circa Lighting; throw pillows from Zak & Fox; bedding from Serena & Lily; candle by Arquiste; book from Strand Bookstore]

Hernandez and Greene think the big windows and high ceilings leave room for residents to be bold, and get creative. Don’t be afraid to work with strong wallpaper prints, they say. “If you want

, run with that theme,” Greene suggests. “The other elements of the room also need to be bold, so the space is on the same volume level.”

[In this photo: The walls are painted Wimborne White 239 by Farrow & Ball; sideboard from CFC; artwork courtesy of ACA Galleries, New York; fossils from Noir; lamp from Circa Lighting]

Hernandez declares residents should go “go big or go home on the art!” She adds, “Because the ceiling height is so high, you truly need large-sized pieces to fill those spaces.”