“Sally” is fully equipped to make over 1,000 customized salads. 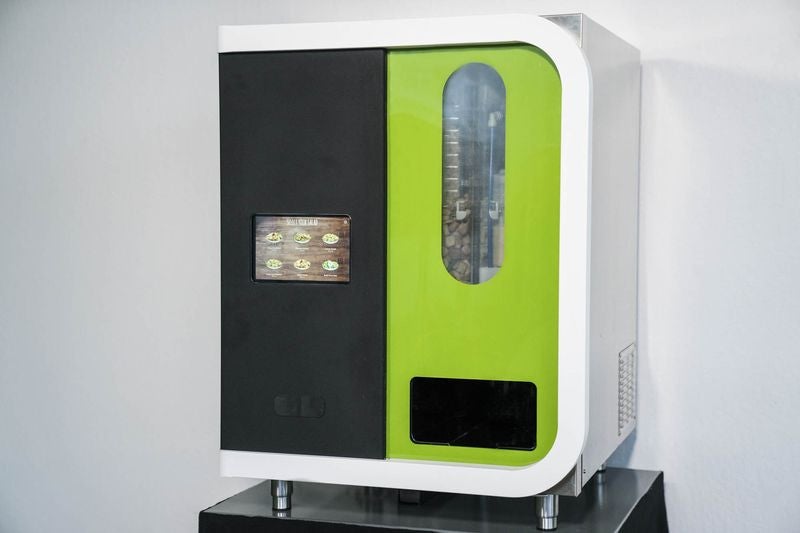 Photography by KRISTEN LOKEN VIA BLOOMBERG

The future of office lunches is here, and it’s a vending machine for salads.

Introducing Sally, a salad-making robot marketed by food service startup Chowbotics. Created in partnership with former Google chef Charlie Ayers, this machine is essentially a mobile salad bar. It can easily be integrated into any office space, which makes it perfect for those of us who want healthy, fresh lunches, but don’t have the time to pre-make salads each morning. Sally is also the answer to buying packaged salads, which oftentimes isn’t a feasible option for people with dietary restrictions.

“The issue with packaged salads is that people can’t customize them,” Deepak Sekar, the founder and CEO of Chowbotics—and Sally inventor—told Fast Company.

“Some of our pre-packaged salads have croutons in them, and if you have a gluten intolerance or celiac disease, that disallows you from being able to have that salad. Or if there’s a salad that has a dairy product in it, again, it’s another lost sale,” says Ayers.

Sally comes with 21 ingredient canisters, and can customize over 1,000 salads. According to the website, the machine can have a fresh salad ready in under a minute. Users can choose from chef-created salads like a standard Caesar, or from more unique options like a “Silicon Valley” salad. They can also customize their own choices from the plethora of available ingredients. Each salad comes with a calorie count, enabling people to see exactly what goes into it, and therefore eat healthier.

Currently, Sally is on a trial run at Palo Alto’s Calafia Cafe, a restaurant and market run by Ayers. The machine has also been tested at various offices since April—and at one Silicon Valley startup, Sekars says they were selling 40 to 50 salads a day.   The robot can fit on a 30’x30′ table, and is about the size of a mini fridge, making it particularly conducive to office environments.

But it’s also prime for several other settings: Chowbotics believes that Sally could work in hotels as an alternative to late-night room service, in airports as a way for travelers to eat healthy on the go (and avoid the dreaded airplane food), and even in fast food restaurants as a means of bypassing long lines. At some point, we may even see Sally in grocery stores, where packaged salads sit on shelves for days. The robot keeps the produce refrigerated, and in doing so, avoids wasting food.

But unfortunately for those of us not living in Palo Alto, we have to wait until Sally hits the mainstream markets. But the good news is, that wait time might be over sooner rather than later—Chowbotics plans to mass deploy the robot as early as September or October 2017.