Meet the artist behind its comeback. 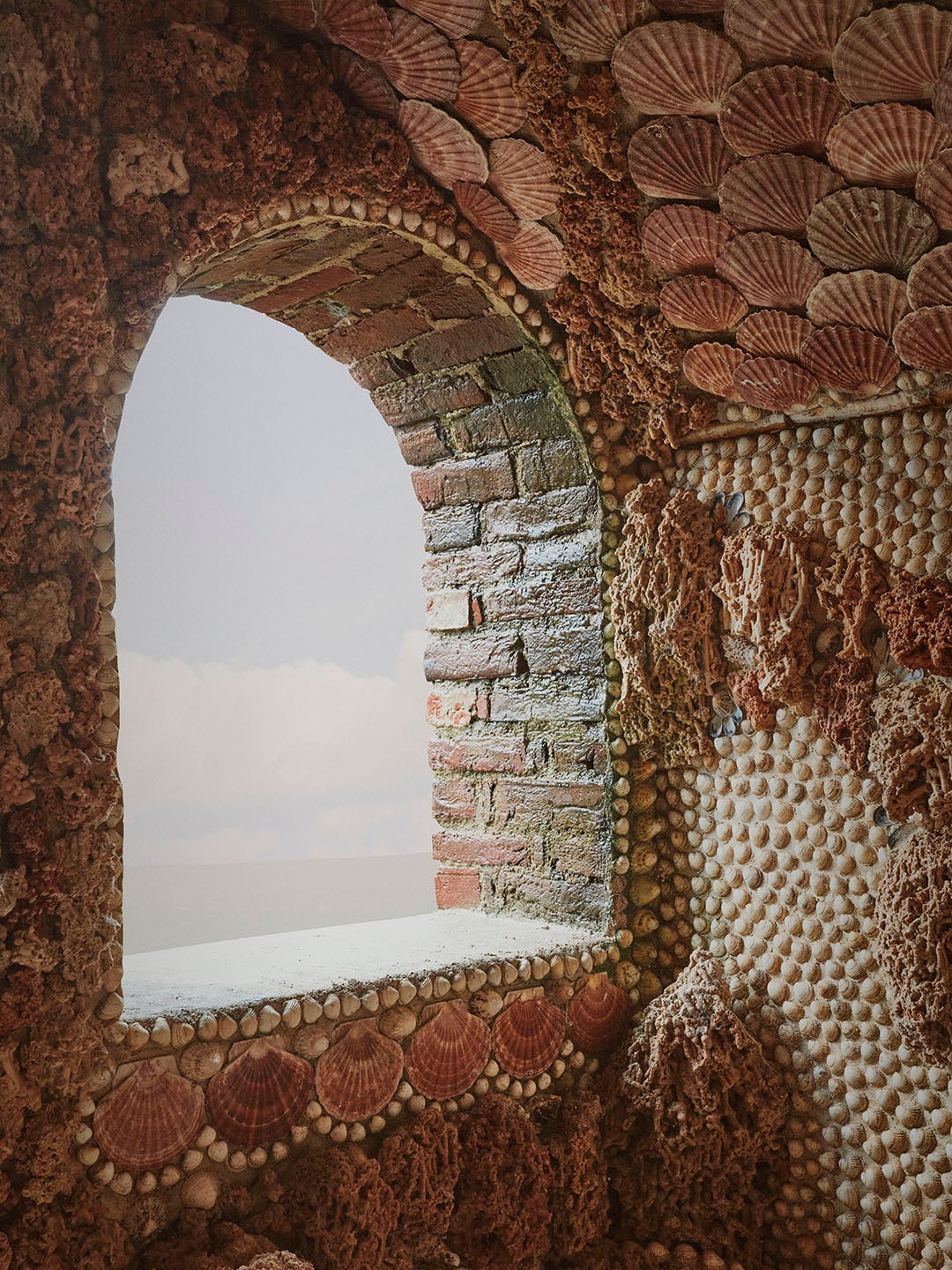 Charlie Day stumbled into sculpture by chance. The garden designer, who spent his childhood in Ireland and Kenya and later moved to England, “was always artistically minded,” he says. He intended to study painting at the Florence Academy of Art, but fell into the medium when the former class was full. “It was only meant to be a monthlong course, but I stayed for four years,” he adds (and discovered the art of landscaping in the process). Now he’s tapped by the likes of the Talbot Malton, a 26-room British inn built in the 17th century, to combine his two passions to build shell-clad garden grottoes—in this case an alcove in which hotel guests can enjoy a cocktail and the sunset.

The cavern, tucked within a retaining wall in the Talbot Malton’s garden, was crumbling when Day was hired in March 2019—a thorough clean-out and some wall reinforcement were in order. The nook’s original purpose is unclear, but that demo unearthed shells within its walls, a serendipitous discovery: In the early aughts, Day had learned the centuries-old ornamentation technique of shellwork (said to have taken off during the Italian Renaissance) from expert Belinda Eade; he’s been known for his elaborate takes on the tradition ever since.

Compared to the smaller-scale shellwork of the 18th-century, when it became a popular hobby among women (think: shell-encrusted picture frames and boxes), Day’s work is supersized and the job isn’t for the impatient. “It is quite specific, getting everything on without too much mortar coming through,” he notes.

Despite the fact that England doesn’t have as humid a climate, Day’s time spent cooling off near the fountains and under the shade in Italy’s Boboli Gardens and Villa Doria Pamphilj was the inspiration for this alcove’s tranquil scalloped ceiling and shell-lined windows. The ubiquitous treated, cleaned shells available online, however, are nowhere to be found. “My technique is quite rustic and naturalistic. Having manufactured shells isn’t my style,” he says.

For the hotel project, he collected more than 4,000 native British shells by hand. “On the weekends, I went to the beaches by Scarborough in North Yorkshire with a bucket,” he recalls. (Day’s Cornwall-based sister supplemented his stash with some of her local finds, too.) The artist describes the other main component, tufa—a lightweight porous stone that breaks up the stretches of shells—as “gold dust” in the U.K.; he had to travel to Wales and Italy to source enough of it.

The alcove’s walls took close to three weeks to complete, but the roof was by far the most challenging surface—Day ran out of tufa midway through. Instead he had to use a heavier stone that required an extra dose of elbow grease. “Sometimes materials change in the process, and you have to go with the flow,” he says. Luckily one can barely tell the difference between the two.

Day’s completed shellwork is complemented by airy McKinnon and Harris aluminum seating (the ideal perch for a game of backgammon and a cocktail) and a fittingly quirky Dodo Egg pendant light by Beata Heuman. As the seasons change, so will Day’s creation. “You get a lovely lichen that grows on tufa when the temperature is right,” he notes.

It’s the same for Day’s projects in people’s homes, from bars to fountains to a shallow recess that water gently trickles down in a private London garden. Its fringe of fragrant jasmine will only become more lush this summer—but wait until you see it dusted with snow.