An oasis in the desert. 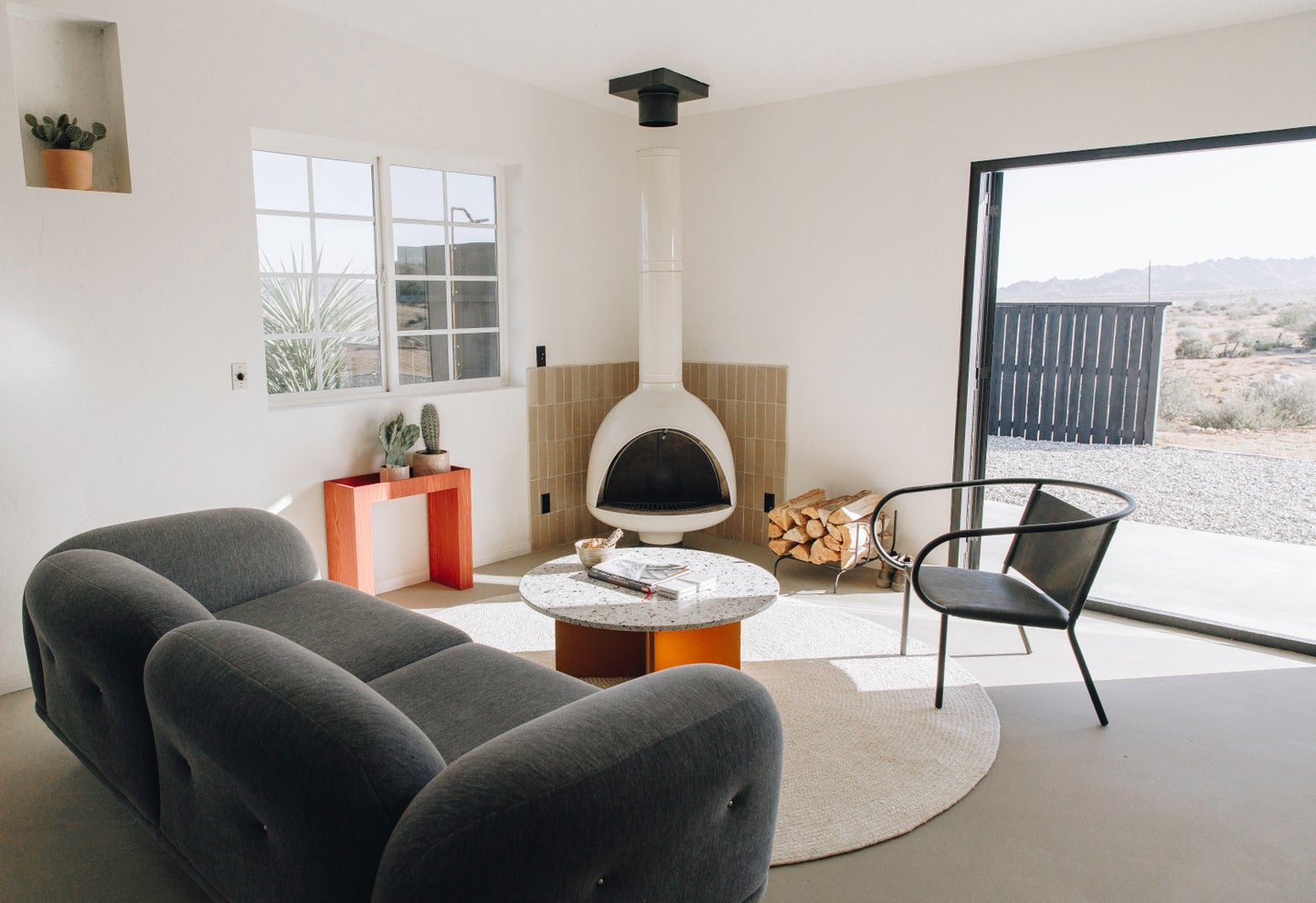 The desert landscape of Joshua Tree is dotted with adobe-style homes that range in natural hues from terra-cotta to sand. The effect is homogenizing: human-made structures blend in with the natural environment, all across the desert flatlands. But a newly renovated structure—the eco-friendly Airbnb dubbed Casa Mami—stands out from it all.

“The desert is such a dry, rustic space, so we tried to contrast it with something that would feel a lot more modern,” says Carlos Naude, who co-owns and renovated the home with his wife, Whitney Brown, under their multidisciplinary creative studio, Working Holiday. Painted in sharp black and white and surrounded by complementary gray gravel, the two-bedroom space is refreshingly modern while still paying homage to more traditional desert style, thanks to its neutral palette and smart use of organic textures.

While many residences in the area may give off a more expressly bohemian aesthetic, Casa Mami leans further into more experimental style, both in appearance and in practice. Nearly 80 percent of the home furnishings (everything from couches to faucets to doorknobs) is available for customers to order, making the Airbnb a totally liveable showroom.

“It doesn’t mean you’re going to leave the house and take our kitchen faucets with you,” explains Naude. “What this does is changes the way you experience a product. There’s no better way to test a set of sheets or a mattress than by sleeping on them for a night, rather than just laying on it for five minutes.”

Eventually, Casa Mami plans to open an online shop, where visitors both online and IRL can shop the space directly. For now, the house is equipped with an iPad that directs Airbnb lodgers to the sites where they can buy the furnishings they’ve come to love throughout the duration of the stay, which include everything from sheets from Snowe, the Cloud Couch by Moooi, smaller accents by Hay, toiletries by Public Goods, and more. In total, 24 different brands fill the home.

Although Casa Mami has prioritized elevated design, its unique showroom angle isn’t the only thing that helps it stand out: It’s also totally off the grid and very eco-conscious. “Being off the grid doesn’t necessarily mean you’re completely remote,” says Naude. “It just means you don’t have access to any of the services from the city. The house is fully sustainable, so it’s run with solar power. It has a septic tank, and we have a water tank. All these things are awesome because they’re good for the environment, but they also come with a few challenges. It makes you a little more aware of your consumption.”

Naude and Brown had lived in New York for five years before ultimately moving to Los Angeles just a year ago, and although they had originally considered undertaking this kind of design venture in upstate New York, they were immediately sold by Joshua Tree’s spectacular desert landscape. Surrounded by a deep expanse of desert and a panorama of mountains, the location is what convinced the couple that this was the perfect spot for their project.

“In two weekends, we looked at about 30 houses. We were on a mission,” he says. “As we were driving up to this house, I was like, ‘Oh my God, I don’t care what the house looks like—the landscape is amazing.’”

Though they’ve traded cabs for cacti, Naude and Brown brought one specifically New York element into Casa Mami: the single-wall kitchen. Originally taking up a whole room (now, transformed into the home’s second bedroom), the kitchen is now composed of just a sink, a 20-inch cooking range (which had to be bought and shipped from New York), a fridge, and just enough countertop space to put together a meal. For New Yorkers, it’s a common sight, but in spacious California, it’s a bit of a novelty that, as a whole, has made the home much more practical.

Even after centering Casa Mami’s mission on innovative design and eco-conscious functionality, practicality remains king and was a crucial facet in both renovations of the space and in the curation of its contents. One major undertaking involved bringing more light into the space by adding large French doors and removing blinds from all the windows. After all, natural light doesn’t just look better—it also requires less energy.

Furnishings were also selected with the effort to make the house not just aesthetically pleasing but also perfectly cozy. “I feel like there are a lot of furniture pieces—and don’t get me wrong, we have a couple in the house—that are beautiful to look at, but they’re incredibly uncomfortable,” says Naude. “We’re trying to find the balance of having really comfortable pieces that make you actually want to sit in that space.”

Above all, though Casa Mami may be a vacation residence for its visitors, it was designed with the hope it would feel like home for both new visitors and perhaps on occasion the couple themselves. “We wanted to create a space that we would want to live in,” Naude says. “A space where we would want to be, where it would be very comfortable and homey.”

This Designer Created a Bohemian Oasis in Joshua Tree

14 Crazy Beautiful Glampgrounds to Add to Your Travel Bucket List