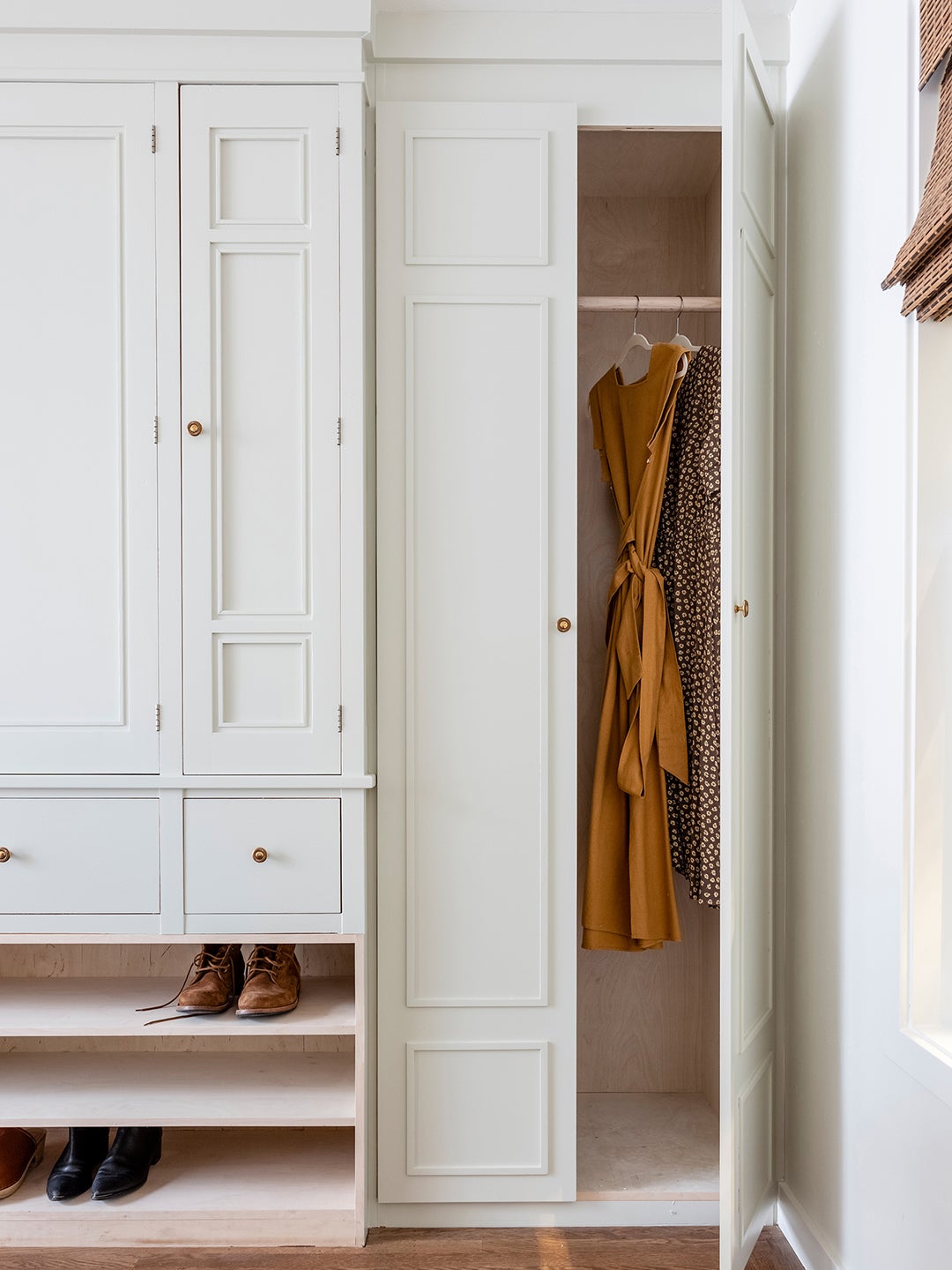 When Christina Valencia first met Megan and Christopher Lim, she was in awe of how little clothing storage they required. “Chris was like, ‘I own two pairs of pants,’” the designer jokingly recalls. “They don’t have very much, which is cool that they live like that.” Also cool: Valencia and her husband, Kele Dobrinski, who together run the firm Colossus Mfg and host the new HGTV show, Mash-Up Our Home, only needed one wall to create a super-functional closet for the Sacramento, California–based couple. But rather than do a standard bifold or sliding door, they built out a custom setup with part of an old wardrobe at its core.

“Cabinetry can get really expensive,” says Dobrinski. When the designer duo stumbled across this antique Drexel cabinet in their storage warehouse (they had originally found it on Craigslist), they knew it could offer a lot of flexibility. “If you’re looking for a vintage dresser, there are a handful of brand names to consider. Drexel is good quality,” he adds. Behind some of the central doors are pull-out drawers that make corralling smaller items like socks and pajamas easier, so it was a no-brainer to place the ready-made piece in the picture.

After sawing off the legs and the top ledge of the wardrobe, the designers constructed two reach-in closets at their shop off-site to go on either side of the unit, as well as an open shoe rack underneath that effectively lifted the whole thing up to the ceiling. “It was a little bit tricky, because we wanted it to feel like it was one custom piece even though it was built in four sections,” says Valencia.

The hardest part of the installation was carrying in the two tall boxes that are intended for long hanging items. “They were probably an inch and a half shorter than the ceiling height, so we had to come in at an angle and tip them up,” recalls Dobrinski.

Finally, when it was all secured in place, they sprayed everything (trim bits included) in Sherwin-Williams’s Ancient Marble, a beigey white with hints of sage green, and all the doors got fresh hardware from Etsy. File this bright idea under upcycled projects that look anything but.