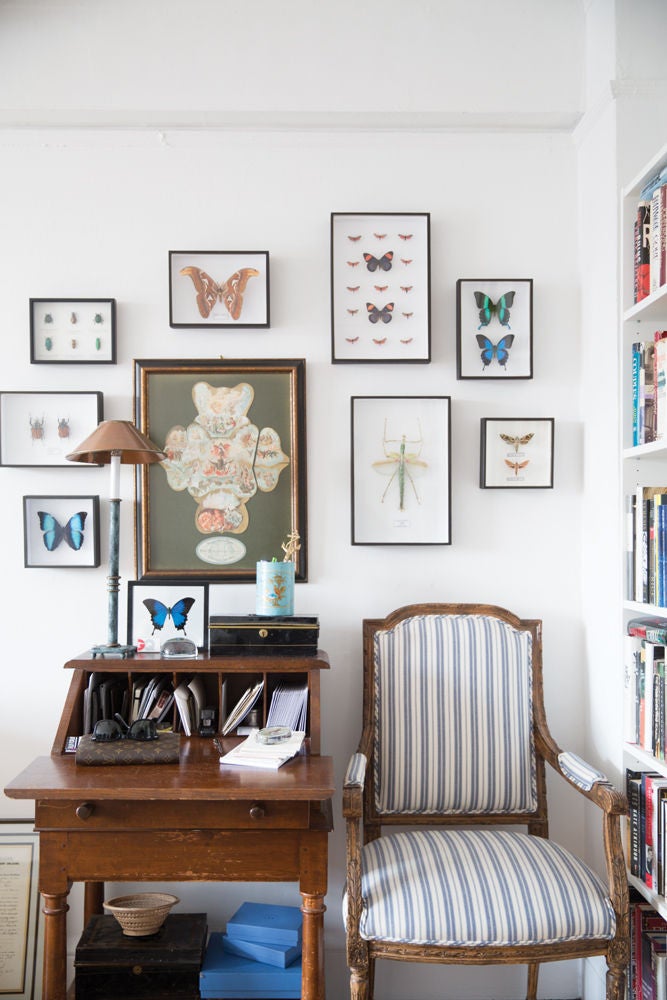 Before moving into their West Village apartment last summer, Bobby Graham (advertising director for international fashion at GQ magazine) and Matthew Marden (fashion director at Details magazine) sometimes strolled past the prewar building after brunching with friends. They had often admired the structure’s original paned-glass windows and ornate stonework. So, when they discovered that one of its coveted one-bedroom apartments was available, the couple leapt to fill out an application.

The living room’s Moroccan rug, found at the John Derian boutique, is Marden’s favorite piece in the apartment.

“For years, we didn’t necessarily care about where our apartment was located as long as the space itself was cool,” says Marden. “But this apartment was perfect in every way, and appropriate for where we are in our lives.”

This carved wooden feline is an heirloom from Graham’s family.

Indeed, the apartment almost seemed too good to be true—in perfect vintage condition, and ideally suited to the couple’s lifestyle. So Graham and Marden set about crafting an inviting space where they could unwind and entertain friends. The pair painted the walls in Benjamin Moore’s Decorator’s White in order to highlight favorite architectural details, such as original windows displaying stunning views of the city. Most of the furniture was repurposed from their previous homes, with a notable exception. “This space spoke to us, and we immediately knew where almost everything we owned would go,” says Graham. “But the one thing we desperately needed was a new sofa.” They soon found the perfect item, a navy stunner from Lillian August. “As soon as we saw it,” says Marden, “we knew that it would anchor the living room.” It creates a cozy, stylish centerpiece.

The antique campaign desk was a gift from Marden’s family.

Graham enjoys decorating more than Marden, but they agree that their nesting process is a full partnership. And while they have collected many pieces as a couple, each has contributed treasured family heirlooms to their home. Marden’s decor is a tad more traditional, rooted in his New England childhood, whereas Graham’s aesthetic is “modern, funky, and eclectic,” taking pleasure in the hunt. “My approach is all about finding things that I really love,” he says. “It doesn’t have to be expensive, it just has to feel right.”