Stay Cool on Your Porch (or Pergola!) With the Best Outdoor Ceiling Fans 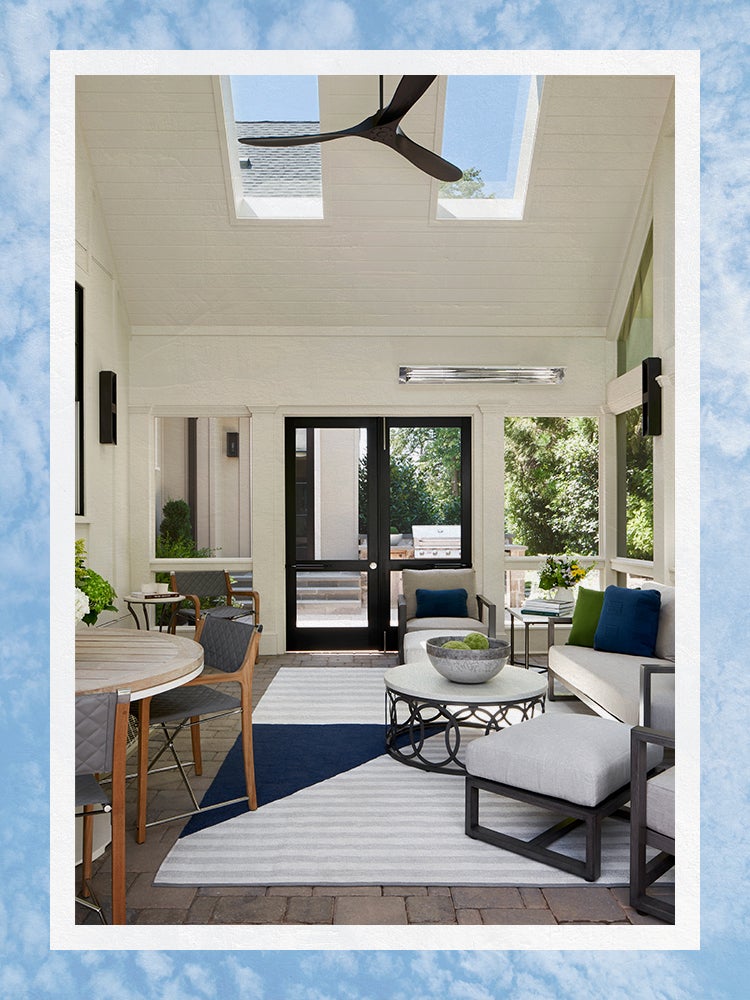 During those sweltering summer months, a glass of ice-cold lemonade or chilled sangria can only cool you off so much. To lounge outdoors with real staying power—and beat the heat on your covered porch or pergola—you’re going to need a ceiling fan. For Washington, D.C., designer Tracy Morris, an outdoor fan is often the perfect finishing touch in most backyard projects. “Any outdoor space is amazing until you’re sitting in the stifling heat,” she says. “A large ceiling fan moves air around the entire space, creating a much-needed breeze.”

But here’s the catch: Not all ceiling fans are created equal, and you can’t necessarily move indoor fans outside. The other caveat? Cooling aside, many ceiling fans serve other functions—as light sources or statement pieces (think: Alexander Calder mobile)—though some designers prefer them to blend into the surroundings with a blur of blades. No matter which camp you fall into, there’s an option for you. We’ve rounded up six ceiling fans that will keep you cool—and make you look good while you’re at it.

Rating: The main ratings to know are wet and damp. For an uncovered space like a veranda, a wet-rated fan—which can take on both rain and snow—is the only option. A damp rating, however, can handle a little moisture, but a full storm would ruin it; it’s best kept in covered areas, like a screened-in porch or four seasons room. Airflow is equally important. “Airflow represents how much air gets moved when a fan is on in cubic feet per minute (CFM),” explains Hugh Prosser, merchandise manager for YDesign Group. “The higher the number, the more air that is being moved.”

Sizing: Generally, the larger the room, the bigger the fan, but Prosser believes a fan with a wide diameter is always a good choice. “It will move more air at a slower speed than a smaller fan,” he adds, which makes it less distracting. Morris also leans to the larger size. “A basic rule of thumb: Use a 52- to 56-inch fan for a space up to 350 square feet,” she says. “If your space is more than 350 square feet, use a fan that is 60 inches or larger.” Ceiling height is another consideration. “Low ceilings—8 feet or less—will need a flush-mount fan or one with a short down rod,” says Prosser.

Features: Other features to look for include light and fan speed. “We prefer for the fan to not have lighting included,” says designer Patrick Sharp of Mister + Mrs. Sharp, who typically brings in light from other sources. However, most outdoor ceiling fans already offer an integrated LED light. Fear not, Posser notes: “Many times fans come with a plate to cover the space where the light should be.” Most provide three varying fan speeds, but the more the merrier; a high speed by Sharp’s standards is 390 RPM (rotations per minute).

Both Morris’s and Sharp’s go-to is the Maverick, a 60-inch fixture with propeller-like blades. Morris favors it so much, in fact, that she installed it in her Virginia home’s enclosed porch. “I love the Maverick fan because it has clean lines without being overly modern,” she says, noting that it comes in multiple finishes to suit lots of different styles. “If you have black window frames, as I do, the black is perfect. But if you’re looking for the fan to completely disappear, go with the white option.” However, looks aren’t everything; for Sharp, the Maverick also passes the “wobbling” test. “There’s a wobbling effect with long down rods and, perhaps, an inexpensive fan,” he says. “The trick is to get a high-speed, quality fan or a shorter down rod to minimize any wobble.”

For the no-frills option, pick this 56-inch, three-blade fan in white to blend into a plain ceiling, or go with the brushed nickel for a more industrial vibe to create a hint of contrast against wood panels. At less than $100, it’s the most minimal and affordable fan on the list, yet it boasts five speeds that can be controlled remotely. The one downside: The 12-inch down rod means this fan only functions in spaces with lofted ceilings over 10 feet—anything lower and you might find yourself annoyed by its humming sound.

An island-influenced outdoor oasis is nothing without a tropical-themed ceiling fan, complete with palm leaf–like blades. Minka Aire’s Gauguin fan brings the beachy vacation vibes home, but don’t let the Bahama Beige’s wood look fool you—this metal, wet-rated fan is ideal for any type of weather. Although a bit small for a large outdoor space, reviewers rave it’s powerful enough to move stale air around without being too noisy. And if the light isn’t something you’re interested in, the purchase comes with a cap to cover up the glass for a smoother appearance.

Most outdoor ceiling fans are a bit boring when it comes to color—black, white, brown. That’s why we can’t stop talking about this trendy matte green solution from Hunter. For the color lover, the weather-resistant, damp-rated blades won’t fade or rust in even the steamiest climates, and the whisper-quiet motor will never disrupt the flow of your alfresco get-togethers. But the best part? With its smaller, 44-inch wingspan, the Kennicott’s six-blade, compact style makes it ideal for tight spaces while still delivering three-speed, fast airflow.

Although only three-blades strong, this oversize, damp-rated fan promises to keep your covered or screened-in porch guests cool in style. It comes in a range of natural finishes, from white to weathered to driftwood, and you can also choose between black, bronze, nickel, and brass motor finishes for a seamless look or subtle hint of contrast. But the best thing about this 60-incher has to be its efficiency: Choose between forward and reverse motions with the included remote to disperse air downward during hotter months or spread warm air in colder ones, respectively. And if you don’t need the integrated LED light, there’s a simplified fan-only version so you can avoid dealing with a cap cover altogether.

Tech titans, listen up: This large, 60-inch ceiling fan is smartphone compatible, so you can control the speed and light with the simple click of a button instead of having to monkey around with a pull-chain, install a wall switch, or worry about misplacing a remote. According to our market editor, most five-blade fans give off dated or robotic vibes, and not in a good way. The Wynd, however, is a minimal, refined option that looks best in matte black.

According to Morris’s landscape architect, Fine Landscapes LTD’s Charles Owen, ceiling fans definitely help keep bugs at bay—especially when properly placed. If flying pests are a major concern, he suggests installing an oscillating fan in each of the four corners of your space: It confuses their flight pattern, forcing them to buzz elsewhere.

How We Vetted These Products

Every product in a Domino guide meets these criteria: