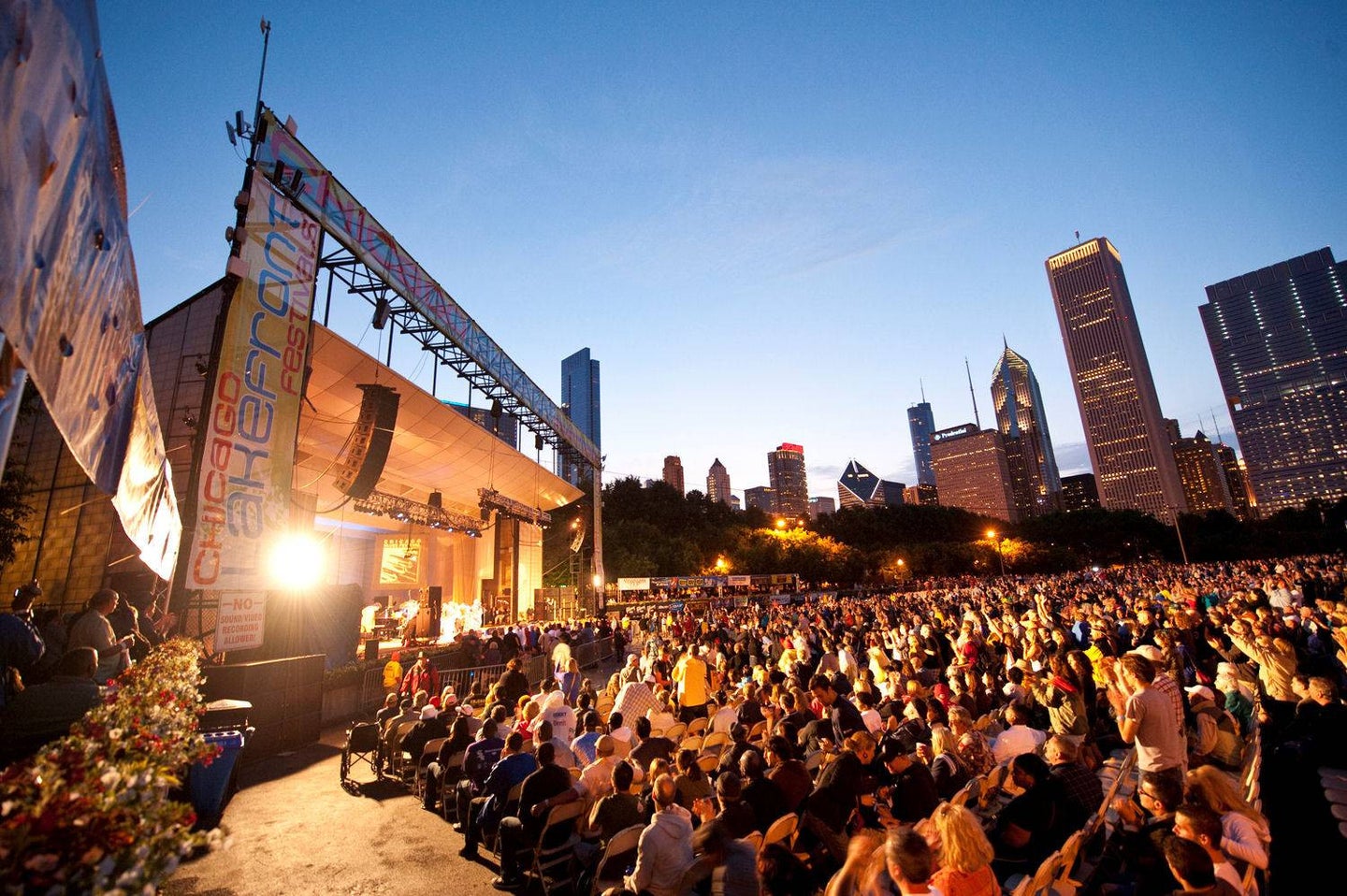 One hundred days of Chicago summer means three full months of celebrating the best of the city—outside!

Starting in June, Chi-towners and tourists alike flock to Millennium Park for the ever-popular—and completely free of charge—Summer Film Series.

Grab your friends and favorite blanket and enjoy films like Purple Rain, Thelma & Louise, and A League of Their Own—just get there early to secure a good seat.

In the days of overhyped outdoor music festivals, it’s refreshing to find that some concerts still remain sacred

July 15-17 marks the 10th annual Pitchfork Music Festival, where instead of memories prompted by LED screens and snap-chatting teens, you’re likely to see a great live show and hear some even greater new tunes—and in Union Park, no less.

Every summer since 1980, Chicago has been home to the biggest food festival in the world.

This year’s Taste of Chicago runs from July 6-10th in Grant Park, showcasing tastes and treats from the city’s globally-renowned dining community. Come for a heavy sampling of Windy City cuisine but stay for the live music and views of the lake.

A celebration of independent makers and the DIY spirit, Renegade Craft Fair hosts events in major cities across the globe—think: London, Los Angeles, New York, and more—throughout the year.

Their summer pop up, held outside the Hideout Inn from June 25-26, will offer handmade goods from a curated crop of local artisans and craftsmen. A can’t miss for fashion lovers and do-it-yourself-ers, alike.

Billed as “the largest free blues festival in the world” the Chicago Blues Festival runs from June 10-12 in Grant Park.

With past performances from the likes of Bonnie Raitt and B.B. King and current headliners including Fred Wesley and Shemekia Copeland, there’s no better way to celebrate the Chicago’s legendary blues scene than here.

From July 23rd-24th, Wicker Park Fest shuts down Milwaukee Ave from noon ‘til 10pm—starting at the six corners near North and Damon and extending all the way to Paulina St.—offering tons of live music, local food vendors, and loads of after-parties. Even better? A suggested $10 donation gets you in for the entire weekend and goes straight to the surrounding community.

Every June, locals and visitors from around the globe come together to celebrate one common good: Chicago’s vibrant LGBT community. Filled with music, food, parties, and exhibitions, Chicago Pride is a weeklong celebration of love and life, in the heart of the Boystown neighborhood.

Festivities kick off June 18, but the world-famous Pride Parade starts at noon on Sunday, June 26 and is of course, free to the public. Just get there early for a good view.

Nationally known as the Midwest’s largest outdoor literary festival, the Printers Row Lit Fest spans 5 city blocks and features texts from more than 200 booksellers from across the country.

The two-day event takes place on June 11- + 12—on Dearborn, from Congress to Polk St.—and brings more than 150,000 bookworms together to celebrate the long lost art of reading.

It’s Do Division!—running from June 3-5 along Division St—as a cooler, more refined older brother to Wicker Park Fest; with lots of fun, food, and festivities for the whole family.

Sessions start on the hour from 7-10am and last 45 minutes each until September. There are even a few special weekday Yoga classes available for those who prefer to sleep in on the weekends.

On June 4th and 5th, the Avon Walk to End Breast Cancer comes to Chicago.

Spanning two full days and over 39 miles, the walk won’t be easy. But raising funds and awareness for women’s health —not to mention the incredible work out and weather— will make it all the more worth it.

And though it may feel like an over-the-top production, consider the lineup—which includes Radiohead, LCD Soundsystem, and J. Cole—and remember that these days, great live music often demands a larger-than-life platform.

Organized by the West Town Chamber of Commerce and showcasing over 100 neighborhood vendors, West Fest is a street festival celebrating the local musical community.

Taking place on Chicago Ave. (between Damon and Wood) from July 8-10, this years’ festival will feature standout performances from Dead Moon and the Murder City Devils, as well as samplings from a few of West Town’s best restaurants, retailers, art galleries, and more.

Ok so it’s not all fully out-of-doors, but every Wednesday night during the summer the Shedd Aquarium stays open super late with a performance from a live jazz band.

You can get tipsy on cocktails—and music—and go look at seahorses or just go outside and enjoy the gorgeous views of Lake Michigan from their incredible terraces!