10 on-screen rooms the guys got right

our favorite leading men know a thing or two about decor, too. 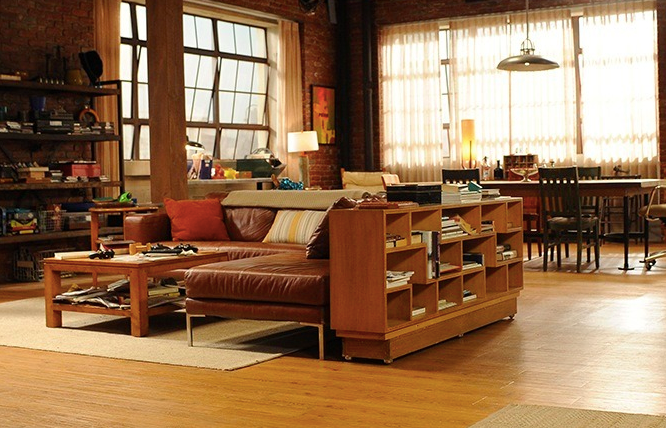 Don’t you love a good style round-up of Tinseltown interiors? Very often, the spaces that are featured on these lists belong to a female character (think the swoon-worthy interiors in Nancy Meyer films!). We thought it was about time some male characters’ spaces got their share of the limelight.

Tom, a trained architect, lives in a downtown L.A. The loft-like space is full of touches that showcase his love of architecture. But the most striking feature is that blackboard wall behind his bed, which Tom uses throughout the film to showcase art, mementos and buildings. And yes, he also draws himself a headboard.

Alex Wyler’s charismatic house is truly a central character in the film. Made almost entirely of steel and glass, with a Maple tree growing in its center, it is built on stilts in the lake. The steel features are industrial and ornate. Low furniture and soft floor-to-ceiling curtains round out the serene, magical space.

Not one, but three guys call this L.A. Loft home. And though Jess makes up the female fourth, the loft was already awesome before she got to this boy’s club dream house. The open, industrial space is perfect for raging games of “True American”. The furnishing is playful, quirky, and a little boyish. Much like the New Girl herself!

Stylish, sexy serial killer Patrick Bateman’s apartment has a sleek, monochromatic vibe. From the furniture to the artwork, it’s everything you’d expect of a wealthy, NYC investment banking yuppie in the 90’s. We’re so glad Bateman thought to put down newspapers and sheets over everything before taking the ax to his victims’ heads. Pity to ruin the furniture.

This modern-day Henry Higgins spends a lot of time in his office (as he does in the original film My Fair Lady, which also had gorgeous interiors, btw!). The dark leather furniture, plaid curtains, brass lamps and stand globe echo the original Professor’s lab, er…office.

Hercule Poirot is as famous for his obsession with order and symmetry as he is for solving murders. The Art Deco era he lived in celebrated industrialization and technology in bold shapes and strong geometrical elements. The lavish ornamentation of that style was modern and symmetrical. All of these values are joyously represented in Poirot’s home: From the art deco apartment building he has chosen, to the lush, yet very orderly interiors.

Another serial killer with a serious sense of style! Dexter’s Miami condo is nothing you’d imagine a self-described “Monster” to live in. The space is almost cookie-cutter, but that open shelving and eclectic furniture really elevate the space. Although fans of the show will know it’s really the through-wall A/C unit that’s important…

The Avenger’s franchise is usually full of ultra-cool, ultra modern spaces, but Steve Rogers’ home is actually a lived-in, accessible, bachelor pad. Pre-war details remind us that Rogers originally hails from the another era. The vintage art pieces serve as stylish mementos to make him (and us!) feel more at home.

One of the most famous addresses ever also has one of the coolest interiors around. The BBC’s Holmes and Watson (Cumberbatch and Freeman) are two modern young men, but their home is almost an homage to these characters’ original era. The wall paper, bookcases and plush armchairs give an old-world feel. To contrast that are some cool, eclectic elements like the sleek but well-worn leather sofa, and skull art. This show’s Interiors Game is on .