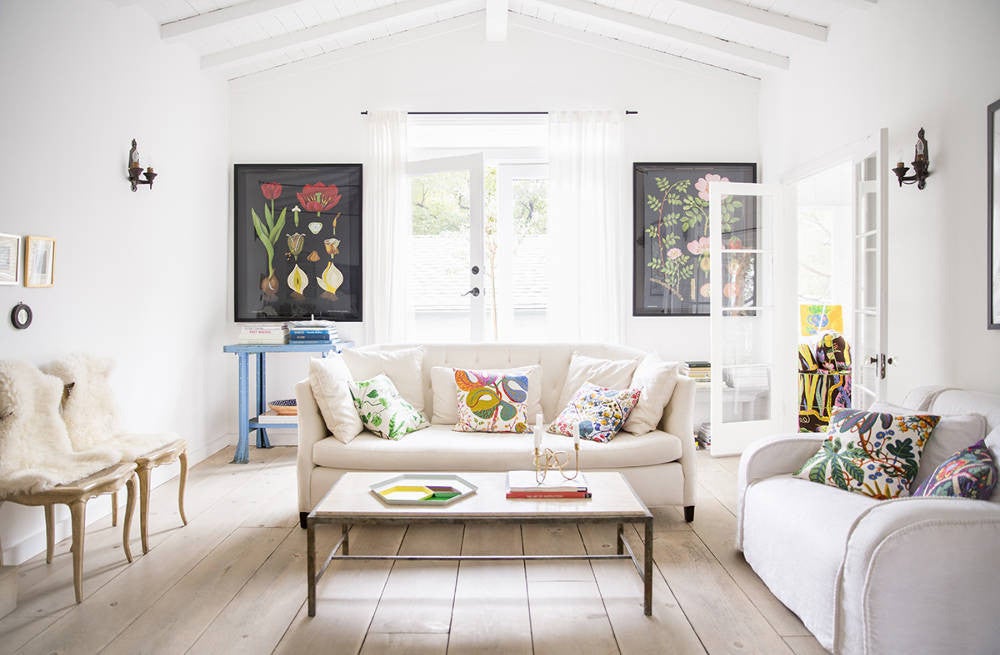 Trend forecaster Anne Ziegler has made a career out of being on the cusp of the latest styles. Now, after a decade of cramped apartment living in New York City, she embraces the laid-back vibe of her new Los Angeles home.

When Anne Ziegler and husband Scott Manson began hunting for a house in Los Angeles last year, they were seeking an oasis from their busy careers.

Ziegler likes to rotate art throughout the home.

A vignette of collected treasures: a Josef Frank candelabra, a pair of vintage antlers, and a shell-covered box given to the couple as a wedding present.

A botanical print echoes the bright hues and patterns of the living room’s throw pillows.

Ziegler’s office is a blend of utility and chic.

Ziegler’s inspiration board, charting what’s new and next!

A creation by Field Kallop gives graphic definition to an ethereal interior.

“STYLE SHOULDevolve. YOU HAVE TO BE OPEN TO change.”

A Swedish trestle table is paired with IKEA chairs.

blank canvas
Eventually, the couple stumbled upon a 1,600-square-foot two-bedroom residence high in the hills of Laurel Canyon. The 1934 abode had recently undergone a top-notch renovation that updated the home with whitewashed pine floors and a crisp white color scheme. “We fell in love with the airy, open space,” Ziegler explains. “High ceilings, beams, and lots of natural light.”

In the kitchen, a vintage French stool provides a spot for perching.

An oversize ceramic bowl offers chic storage in the entryway.

In the guest bedroom, a photo by Victoria Will of the band Animal Collective hangs above a bed dressed in bright-blue linens.

“I love the house’s clean lines. They’re a great backdrop for favorite things.”

Small bathtub with a chair.