The creative force behind lifestyle brand Thelma invites us into her new pared-down Charleston home. 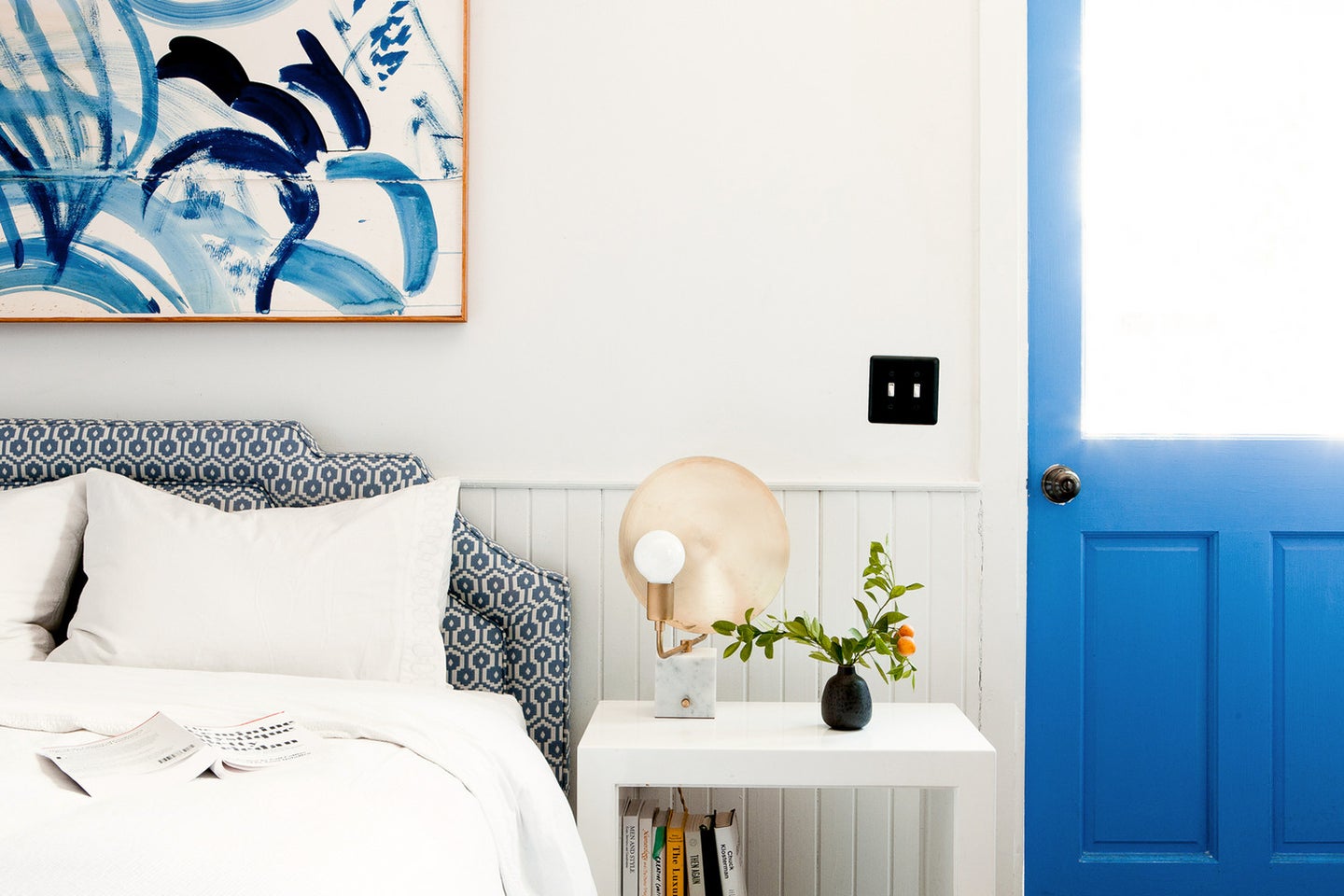 Charleston always held a special place in designer Amanda Greeley’s heart: As a child, she and her family often visited the South Carolina city. So when she got burnt out on New York City three years ago, she packed her bags and headed to the Lowcountry, where she joined a growing group of pioneering creatives bringing new life the local aesthetic.

She had been looking to rent, but came across a one-bedroom house on Craigslist in an up-and-coming neighborhood. She wasn’t looking for a gut job, and this home had good bones, high ceilings, and crown moldings.

“I saw a place that could be transformed simply with fresh paint, new light fixtures, and hardware,” says Greeley, who launched Thelma, her new line of modern loafers last year. “When I moved in, each room in the house was painted a different bright color like coral, teal, mustard, and lime green, but the floors, most doors, and fireplaces were are original.”

When selecting furniture, Greeley stuck to natural materials like rattan, grass, linens, cottons, and wood. “I didn’t want anything about the house to feel stuffy,” she explains. Plus, because Charleston gets almost unbelievably hot and humid in the middle of the summer, I wanted everything to be light.”

With the Atlantic Ocean just a 15 minute drive away, Greeley tapped into a soothing, beachy color palette. “I wanted to resist the trend of simply painting everything white,” says Greeley, “so I added in some blues. I picked a pastel blue that would commonly be used on porch ceilings and applied it to the floors, as well as the walls of my living room and the ceilings in the kitchen and bathroom.”

She used a deep midnight navy shade on the walls and ceiling in the hallway. The goal was also to bring the outside in and create a porch-like vibe indoors since the house lacked an actual patio. “I’m  always happier being outside and I wanted to bring some of the outdoors in,” she says.

Other than a handful of dhurries in small spaces, all of Greeley’s rugs are grass. “I like the durability of grass and it feels appropriate to walk in from a day at the beach with sandy feet and have everything under your feet be wood and seagrass.”

Charleston has also given Greeley a newfound appreciation for supporting local female artists like Chambers Austelle, Carrie Beth Waghorn, Dorothy Shain, and Alex Waggoner. “I’ve realized that an art collection is as much a reflection of a person’s life as it is something to make a space feel special. It isn’t so much that I strictly sought out female artists, but it does seem as though that’s what happened.”

Another quirk of the intimate home is that it doesn’t have a single built-in storage solution/system—no closets, cabinets, or shelves. Not being able to hide anything posed a challenge but Greeley relished the opportunity to do a Marie Kondo on her possessions: “This house made me want to scale back my stuff.” Her one hanging closet is an open rack made out of copper pipe strung with heavy nautical rope to hold hangers.

The kitchen is a simple box with an electric stove, a refrigerator, and an old stand-alone sink. Greeley considered doing a major overhaul because she loves to cook, but “in time, the simplicity of the room grew on me. It feels very European.” A French cooking poster, picked up at a flea market in Paris, and a series of envelope-shaped plates from Merci adorn the walls, and black and white cafe stools line a functional steel industrial table (it came with the home and doubles as a bar). “It has surprised me how little I need in my kitchen.”

For Greeley, the trick for downsizing into a small home was to consider things she didn’t actually need. “I find that so many people instantly get to figuring out how to store all of their stuff before considering if they even need the things being stored.”