When they couldn’t find the perfect sofa, they made their own. 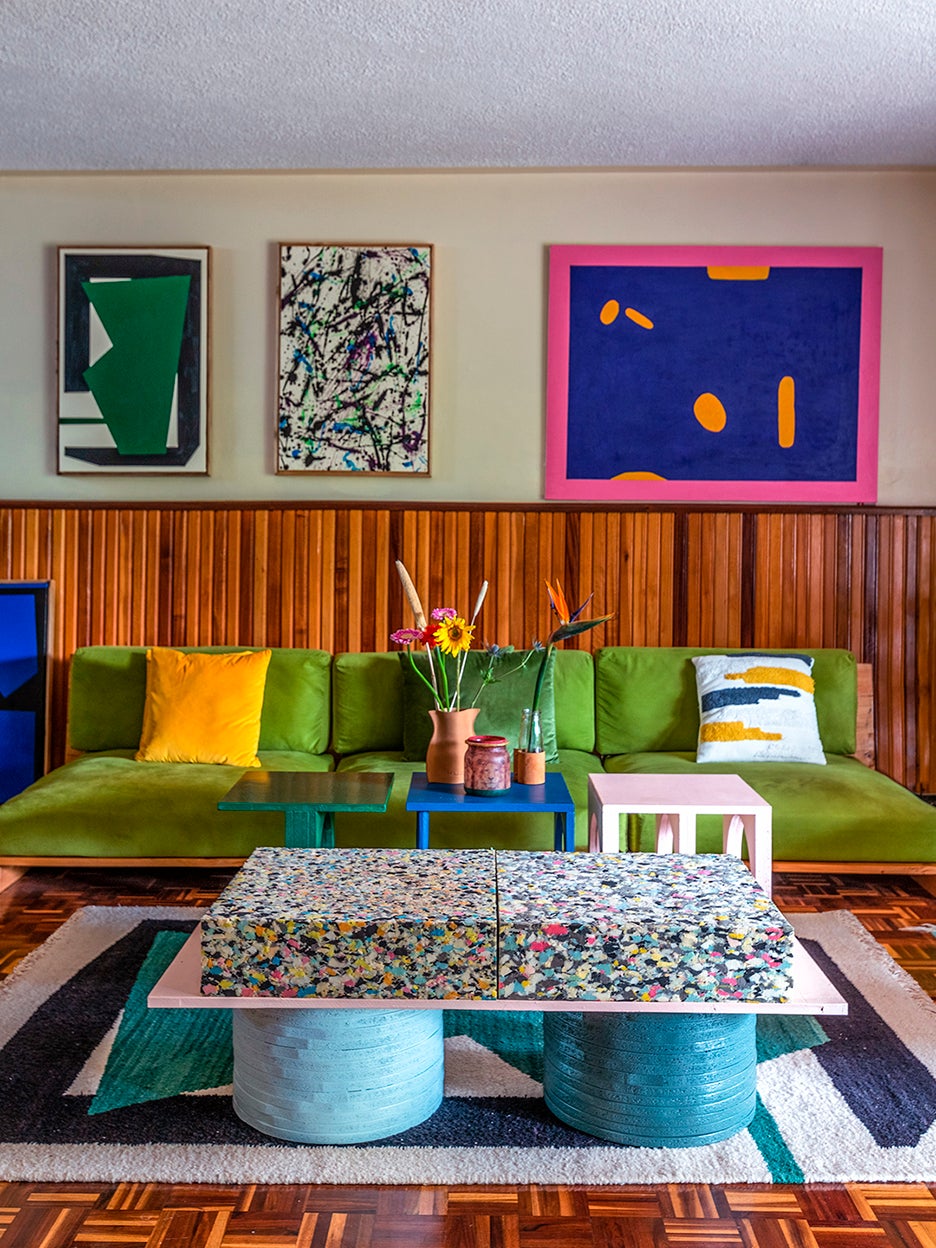 After three months of fruitless searching for the right sofa—low-slung, streamlined, and anything but neutral—for their new Nairobi home, Ulrich “Uli” Jänen and Judith Odhanjo took matters into their own hands.

“We needed a spot where we could chill,” says Jänen. After moving from Germany in January of last year, the couple was starting from scratch on the furniture front—which was fine by them. They had taught themselves how to build pieces for their former place through good old-fashioned trial and error. “We can’t say we knew everything we wanted to put into our designs right away,” admits Odhanjo. “We were just asking people to make stuff for us and didn’t really like how it turned out.” Kenyan decor tended to be a bit too dark and heavy for the color-loving pair; they preferred to blend the country’s influences with the Bauhaus vibes of their life in Frankfurt.

In a few sketches, Jänen and Odhanjo landed on the perfect seat: a simple platform fitted with six pea green velvetlike cushions that could be removed when the weather gets too warm. (Lounging on the bare hardwood is surprisingly comfortable, Jänen points out.)

It wasn’t long before friends were commenting on how much they liked the couple’s handiwork. “That’s when we committed to making furniture for ourselves,” says Odhanjo. One sofa turned into armchairs, stools, coffee tables, paintings, and anything else the split-level house called for. Jänen took on the tables and abstract works for the walls, while Odhanjo, the handier of the two, built most of the chairs and picked out textiles and raw materials.

“We pretty much designed everything in here together,” notes Jänen, save for a few light fixtures from IKEA. “Or we drew up the plans and had a local craftsman from our creative network build it.” While Odhanjo now works on Achuli full-time, Jänen still holds his job in international cooperation and sharpens his craft on weekends.

Side tables made of stacked chipboard discs flank the sofa, a natural landing place after a Saturday spent toiling on new ideas. Jänen will often lounge in one of their welded metal sling chairs to work on a painting. And every night they eat at their custom-cut, wood-inlaid dining table on the upper landing, set atop a graphic flat-weave rug. “I like a black and white setup, too, but what we really go for are colors that shine when exposed to direct light,” says Jänen: rich cobalts, minty greens, and sunshine yellows.

While the couple’s main living space shows off their finished projects, the garage and parts of the patio are full of pieces in progress, waiting for their next coat of paint or glue to dry. “Our own house is more than full,” says Jänen. “Now we’re only producing for clients.” Late last year, they started shipping internationally.

At any given time, the duo has just a few items in the works to ensure each is truly one of a kind. To get your hands on a creation, send a DM to the Achuli Design Instagram account, @achulidesign—the brand’s signature seat is $280 and side tables go for $200—and, preferably, ask for a twist on something you see.

“I’ll re-create a product if somebody likes it,” says Jänen, “but I’d much rather work on an entirely original concept. Ideally we’d make something, sell it, then make something new. It’s really furniture as art.”