In This A-Frame Cabin, a Family Stacked a Bedroom on Top of a Movie Loft

A double-duty staircase leads the way. 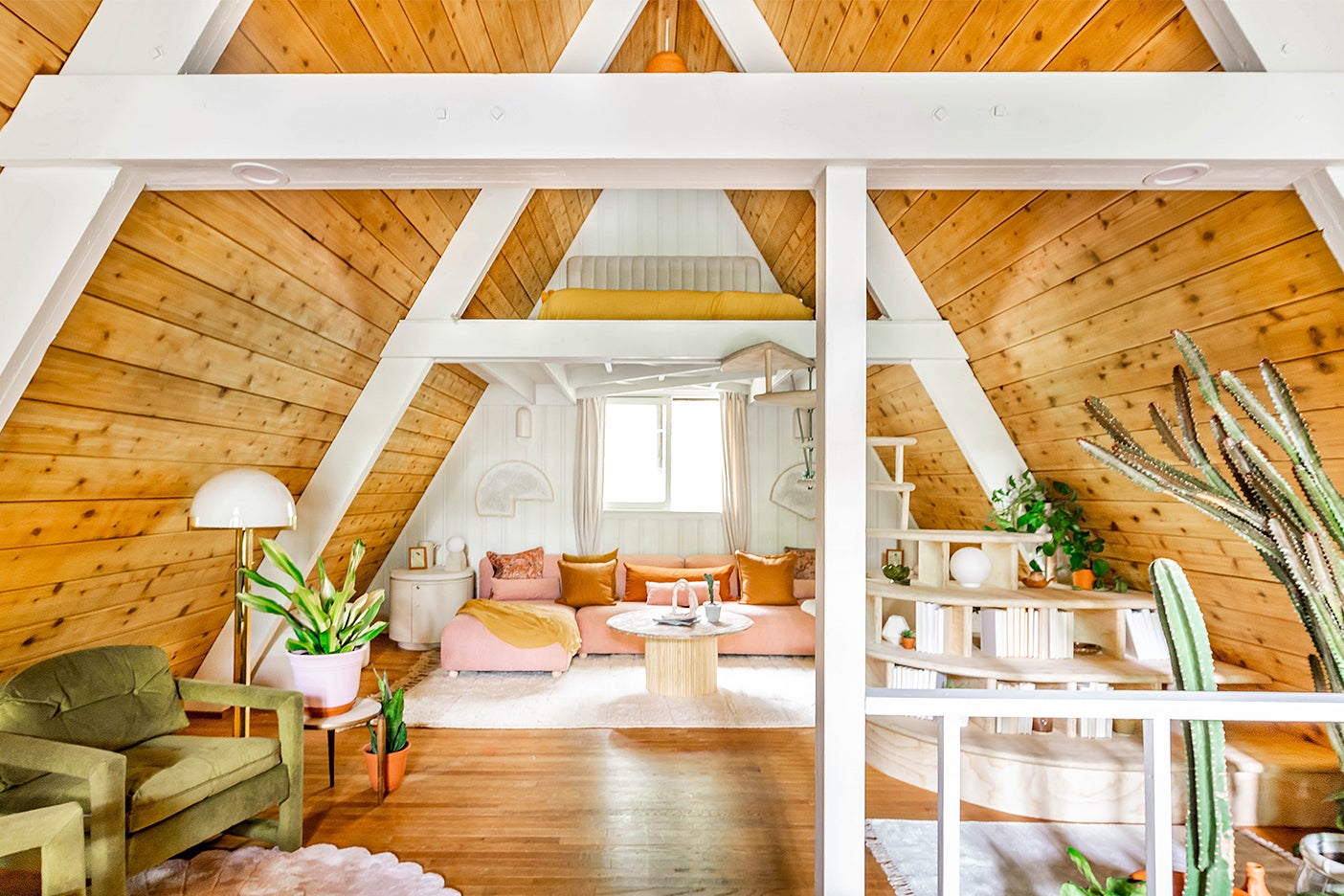 Photography by Josh Street; Design by Paul and Kristy Benson

As the country continued  to shelter in place in May, Kristy and Paul Benson moved into their dream A-frame in the Pocono Mountains. This would have been a dream scenario for the Philadelphia-based couple, save for one thing: The property they had just purchased hadn’t been updated since it was built in 1972, and they had two kids, Truett and Talula, and their cat, Tootsie, in tow.

“It was an adventure for sure,” remembers Kristy. “The pipes burst the first time we turned the water on, and we had no appliances except for a mini fridge and a barbecue grill for the first month. We felt like we were camping.” The couple rolled up their sleeves for a speedy renovation (with the children pitching in with painting and cleaning up as much as possible), gutting everything from the basement to the kitchen. “There was so much unused room up top,” says Kristy, which led to the project they’re most proud of: a movie loft (with bonus bedroom) tucked in the eaves.

“If you have ever stepped foot into an A-frame, you know the magical feeling of gorgeous paneled ceilings, long beams, and wide-open space,” says Kristy. Only the sky (er, the roof) was the limit.

Creating Room Out of Thin Air

First, the couple added square footage by way of a sleeping alcove just under the roof. “We wanted to keep the integrity of the A shape while using the ceiling height in a unique way,” says Kristy. It’s where she and Paul have been sleeping during the renovation downstairs (the kids took over the master bedroom). “We have a green velvet curtain that hides behind the beams and pulls down for privacy,” she adds.

Instead of a traditional staircase, the couple imagined curvy steps that would double as storage—open shelves take the place of standard risers. “We wanted something that didn’t take up too much floor,” says Kristy.

Because the interior was so dark (there are only windows at either end), the couple knew they needed to either paint the entire room or strip the paneling. “Although the latter option was more tedious, we wanted to keep the cabin feel intact,” says Kristy. Once the Bensons started sanding back what they thought was knotty pine, they realized the entire house was actually made of cedar. “It was a pleasant surprise since it’s naturally water-, pest-, and mold-resistant,” she adds. They painted the beams, living area ceiling, and back wall white to lighten things up even more.

The lower section is now an epic movie-watching spot, complete with a screen that rolls down from a beam above and a projector that’s stored in one of the round side tables when not in use. “The other table is filled with full-size chocolate bars and bags of movie theater candy,” says Kristy. A down sofa that fits the entire family was a must: Poly and Bark’s Infina modular sectional in pink fit the bill. “We all love to kick our feet up and relax, so we bought four ottomans that we tuck at the base of the loft and move over when all of us want to lounge.”

Ceramic sconces, found on eBay, set the scene. “They remind me of typical movie theater down-lighting,” says Kristy. She paired each with DIY art she made with plywood scraps cut in Pac-Man–like shapes and topped with a joint compound for texture. “We wanted the first impression of the loft to be that this is a place where you come to get away and get lost in a good book and a cup of coffee,” Kristy explains. “We wanted something that said stay a while.”