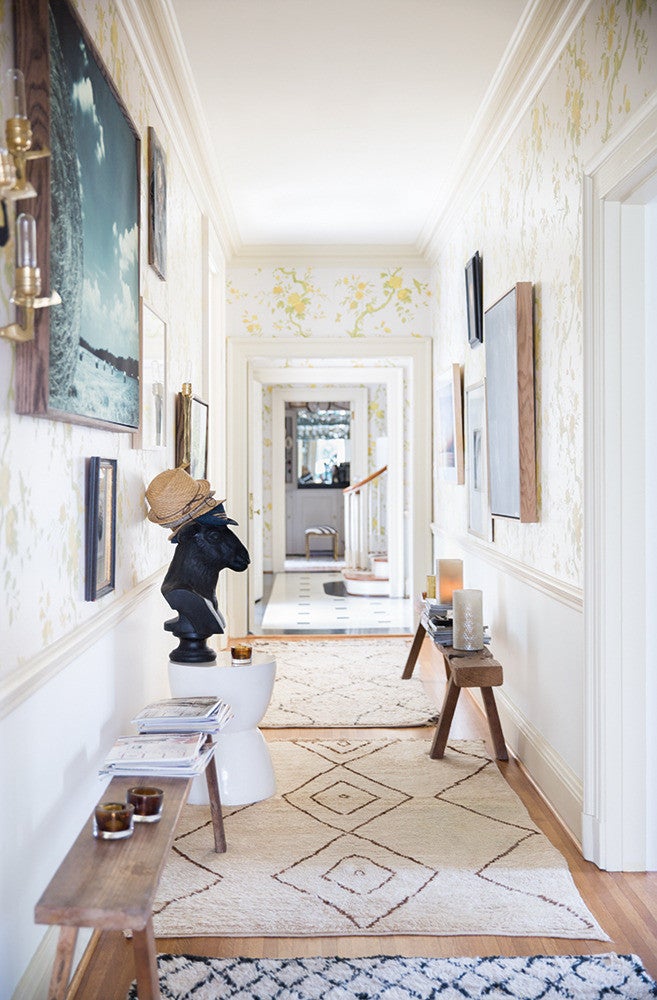 Most couples downsize after their last child leaves for college, but not designer Lisa Sherry and her husband, photographer Ron Royals. They scaled up. “We weren’t even looking to buy, but I used to run by this house on my morning jogs,” says Sherry of the 6,000-square-foot Georgian, which had sat unsold on the market for almost four years. “We were not planning to move and not looking at all to buying a new house within a two-week period.”

“Even though I’m a white-walls girl, I kept this wallpaper because I thought it was so vintage it had become modern again,” says Sherry. But she did update the effect of its 1970s floral pattern by painting the portion below the chair rail (previously yellow) bright white.

While Sherry is the ultimate decision maker when it comes to designing the couple’s interiors, Royals sometimes interjects his own ideas. In the dining room, for instance, Royals wanted a a farm table. Sherry surrounded this one with modern chairs to create the perfect mix.

Sherry covered the walls of her bar with portraits and landscapes. “There are a few negative spaces left,” she jokes, “so I’m still collecting.”

The zebra black on light beige stair runner was made from three hides cut in half.

The two-story sunporch is Sherry’s favorite part of the house. She uses its lower level as a living room, while its second floor, which overlooks the backyard garden, serves as her office.

In her bedroom, Sherry wanted to create a white, calm respite. “To give it a twist,” she says. “I installed one of my husband’s photographs from a trip to the Louvre in place of a headboard.”

An avid collector of portraits, Sherry fell in love with the Roy Nydorf painting that hangs above this guest room’s tufted headboard. “She’s sexy and European,” she says, “so I named her Babette.”

The couple loves to host gatherings. To create an inviting and casual atmosphere, Sherry made certain that every room had a purpose and that none were off-limits.