Created by Domino for 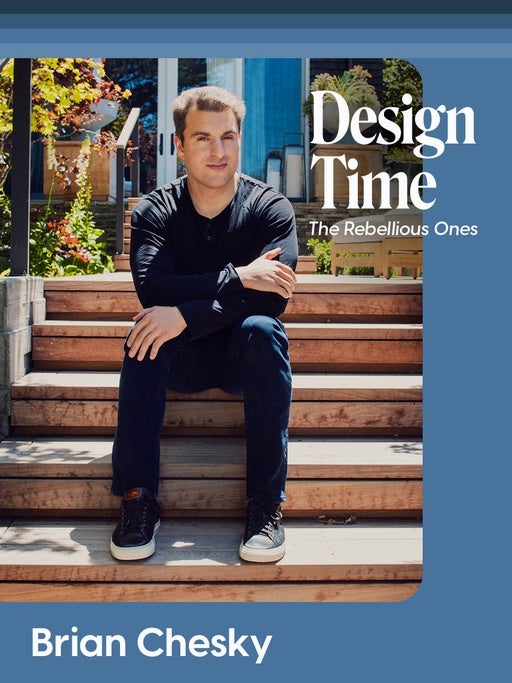 Airbnb cofounder and CEO Brian Chesky didn’t necessarily set out to create one of the most ubiquitous brands in the world; it just kind of happened. What started out as an air mattress on the floor of Chesky’s San Francisco apartment is now one of the largest (if not the biggest) destinations for all things travel. A self-described disruptive kid who has always been a bit of a rebel, Chesky credits his design-forward approach—putting creativity at the center of everything he does—to his success.

“When I was at RISD everyone said, how do we get designers in the boardroom? And, I thought why can’t designers just run the boardroom? And, maybe that’s what made me a rebel, a rebel designer who had the audacity to think they could run the show rather than just be part of the show,” the Rhode Island School of Design grad shares with Domino deputy editor Julie Vadnal in the latest episode of Design Time: The Rebellious Ones (available on Spotify and Apple Podcasts).

In the episode, Chesky shares what he looks for in an Airbnb, what hosting essentials he stocks his home with (“I got the nice Dyson hair dryer,” he says), and why he will never again paint a wall red. But first, he plays our game of Never Have I Ever.

Never have I ever…built a terrarium.

I have. We have Airbnb experiences, and there was a terrarium class that I took. It did not look so great. It was like in elementary school when you do an art class and the thing doesn’t look like the teacher’s.

Never have I ever…broken something at an Airbnb.

Well, never have I ever broken something, but I’m not saying a family member of mine didn’t.

Never have I ever…painted an accent wall.

Oh, this is horrible. When I was in Los Angeles, I was 23 and living with three other guys. And I decided to paint all the walls red in the living room. I thought it was really cool. I went to a bar once, and all the walls were red and they were lit up, and I thought: That’s really fun. The thing about red is it gets your heart rate going. So yeah, it’s a little intense and there’s a reason why most rooms aren’t bright red.

Never have I ever…dated someone for their apartment.

I have not. Why would I do that? I have Airbnb.

Never have I ever…decorated with sports memorabilia.

Growing up, every square inch of my wall was filled with cutouts of Sports Illustrated. I was very into sports like a lot of boys in upstate New York. Never have I ever—growing up—had wall not covered in sports memorabilia.