The owners have spent nearly 60 years restoring it. 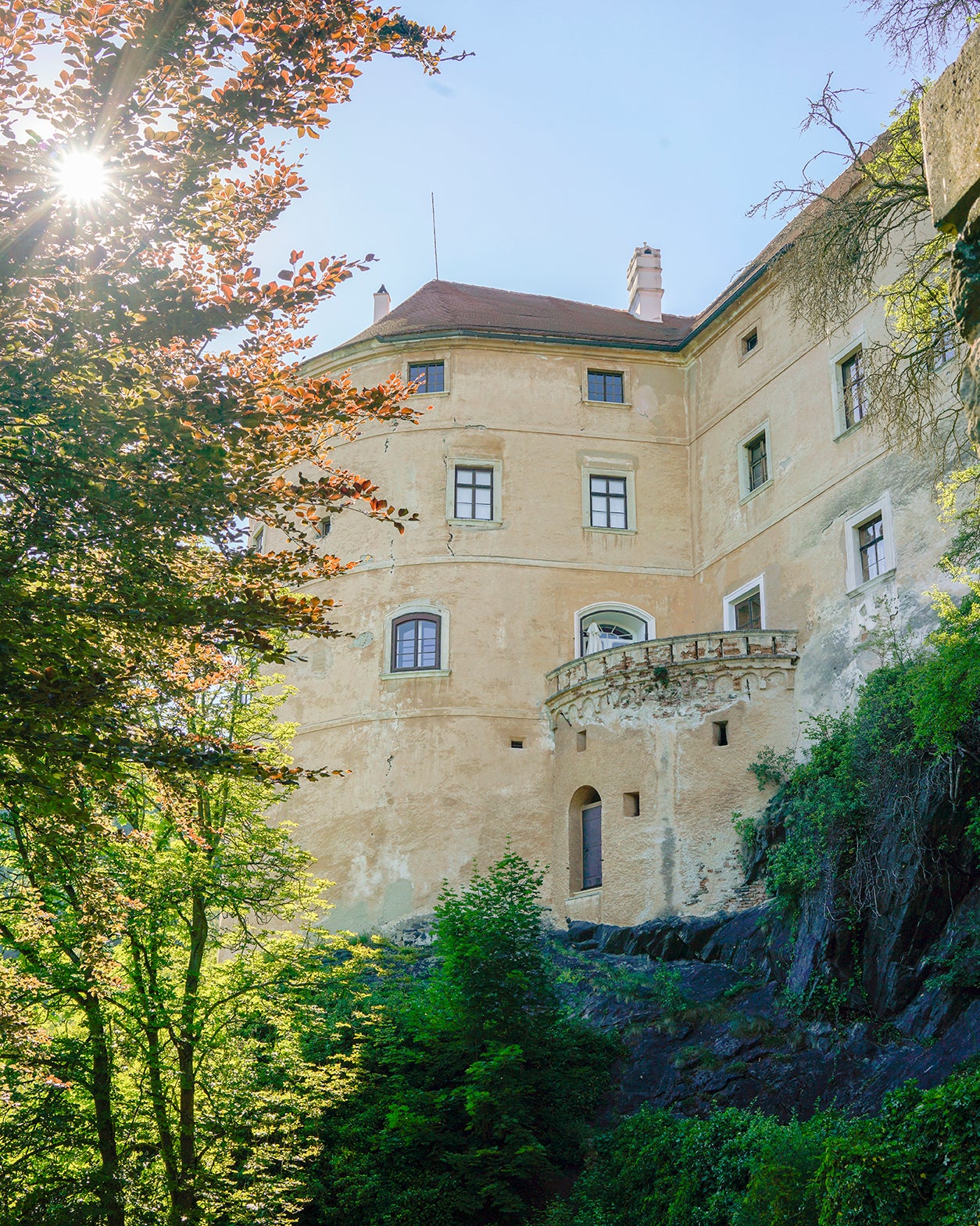 In 1965, Dieter Bogner happened across the sweetest real-estate deal of all time. He went with his brother and father to look at a section of forest along the Kamp, a river in their native Austria, but the acquisition came with a catch: They could only purchase the land if they took over the adjacent neglected castle, too. “It was like from the fairy tale Sleeping Beauty,” Dieter’s wife, Gertraud, recalls of the first time she stepped inside Buchberg Castle. The place had undergone countless construction and reconstruction phases over the centuries. The first building was erected around 1150, then in the 1600s it was expanded upon and many of its noteworthy Baroque details were added. But Dieter and Gertraud would arguably put the most unique spin on the property.

The Bogners carved out a mere 2,700 square feet of the castle for themselves, including a simple kitchen they installed around 20 years ago that’s tucked underneath an elaborate vaulted ceiling. After patching the leaky roofs and lightly renovating the facades and interiors (the couple’s motto has always been to only update what is absolutely necessary in accordance with the Austrian Department for the Preservation of Historical Monuments), they began filling the rest of the courtyards, towers, rooms, and hallways with contemporary art. Today around 20 works form the Kunstraum Buchberg Collection, which can be viewed by the public by appointment. “Buchberg Castle is like a small village. You can walk around in it and always see something interesting,” shares Gertraud.

A mirror glass pavilion by American visual artist Dan Graham stands in the middle of a former ornamental garden; the parapet columns on the castle’s ramp are lined with colored spheres by Wolfgang Stengel; and Jorrit Tornquist replaced the missing Gothic altarpieces in the castle’s chapel with wood panels covered with gold leaf. “It’s not purely historical, it’s not overwhelmingly modern, it’s just the Kunstraum Buchberg,” says Gertraud.

A handful of the installations directly involved the architecture, like the magenta-painted entrance hall designed by local artist Oskar Putz in 2006. “It radically changed the space and its atmosphere,” says Gertraud. Their dining room, on the other hand, was a dusty blue hue when they moved in and still is today. The couple only touched the lighting (they purchased the extra-long chandelier 40 years ago) and furniture. “When we took over the castle, it was completely empty,” recalls Gertraud. “That was good for us, because what would we have done with Baroque furniture?”

The surprising thing about decorating a castle? You don’t have to stick to Louis XIV–style furniture—floral Josef Frank fabrics and parchment lampshades look right at home. Many pieces were passed down to them from their parents, while some were gifted by friends who didn’t have enough space to store them. “[Our] furniture intentionally does not follow any style,” attests Gertraud.

During the wintertime, the Bogners keep busy with administrative, archival, and research work, as they prepare for the many preregistered visitors and groups that come to see the art in the spring. Still, when the majority of your house dates back to medieval times, there’s usually a pipe or a wall that needs fixing. Right now, they are working on restoring a small house behind the main building where Gertraud’s niece spends weekends with her family. “There is always something going on in Buchberg,” she says. This modern-day fairy tale hasn’t reached “The End” just yet.