The accordion doors are always open to visitors. 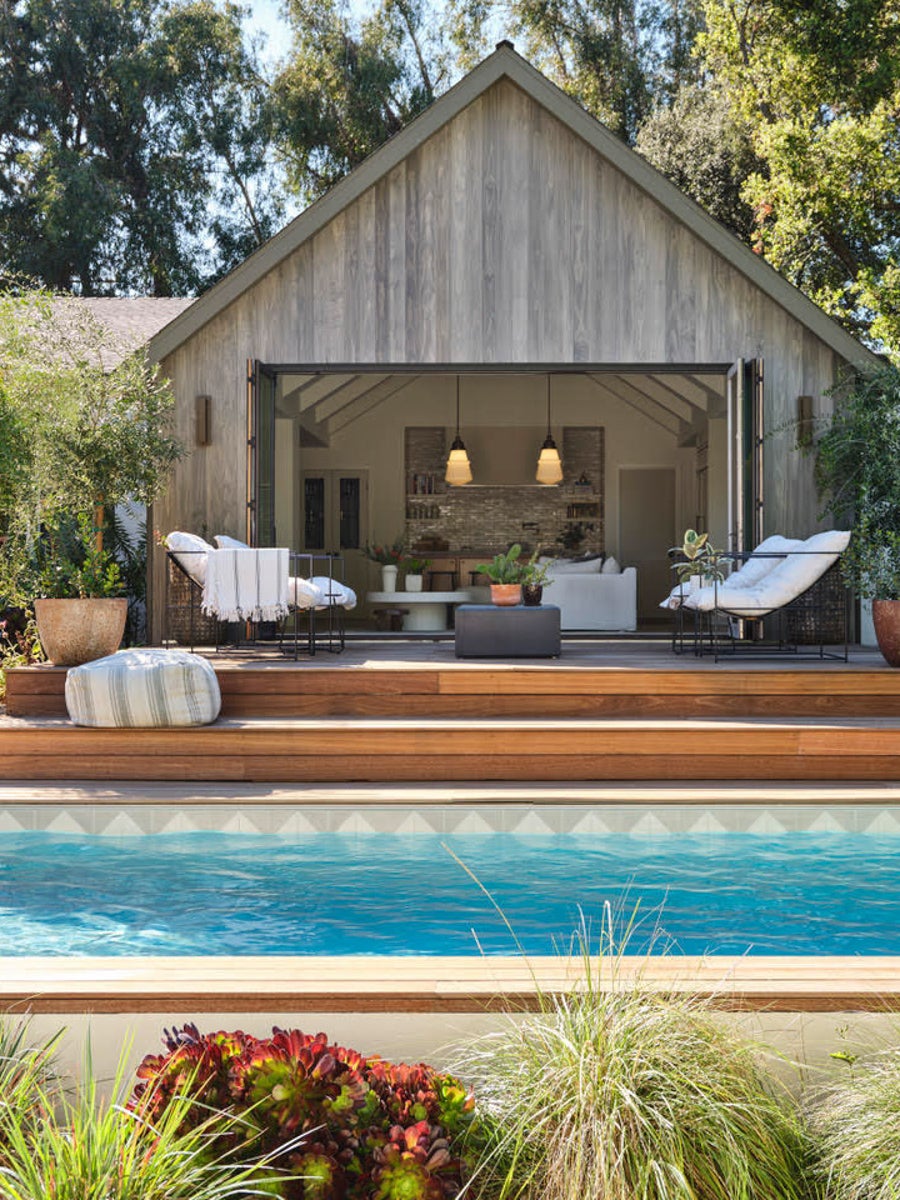 When Sam Donnelly and her family moved from the U.K. to Los Angeles nine years ago, they did what most other English transplants do: got a house in the hills. “It was tough, because I didn’t know L.A. I’d only been here one time on vacation when I was really young,” says Donnelly, a former executive producer on Britain’s Got Talent, now an executive producer on America’s Got Talent. “I just landed and rented a house in Laurel Canyon.” While Donnelly considers their former Spanish-style abode “a dream,” it was proving to be an impractical one as her then 5-year-old son grew older. The rolling landscape and winding streets weren’t made for riding a bike to a friend’s place. So in 2019, Donnelly made the decision to move down to flatter ground.

“You just don’t feel like you’re in the middle of Studio City suburbia,” says Donnelly’s architect, Ryan Perella. Having worked on Donnelly’s previous house and gotten a good sense of her style and the way her family lives, Perella knew this property, surrounded by mature trees, was right up his client’s alley. The existing home? Not so much. “I think the permit says ‘must retain three walls,’ so that’s just what we did,” he shares. “It was really a start-from-scratch build.”

The architect leaned into simple gable roof forms, which left an opportunity for an enormous accordion door off the living room. When Donnelly isn’t traveling the U.S. during filming, she leaves it open all day long. “That’s kind of the point after you’ve lived in London your whole life, right?” she says with a laugh. For her teenage son and his friends, it’s an ideal pass-through to the tile-lined swimming pool—they’ll start at the threshold, run down the steps, and jump right in.

The only thing more shocking than the year and a half it took to renovate the single-story home is the two years Donnelly waited for her splurge-worthy range to arrive (the family used the home’s tiny original one in the interim). The entire kitchen was designed around showcasing the French-designed appliance: Perella opted for simple dolomite countertops around the room’s perimeter and dove gray on the walls.

The pair of leather club chairs in the living room are the only things Donnelly brought with her to the U.S. from England. (She’s owned them for nearly 30 years, and they’ve lived with her in every house she’s ever had.) Overhead, the sculptural woven pendant lamp is a newer find from Kenya that’s handcrafted out of recycled plastic fibers.

Donnelly’s eye is all for the details: In addition to her day job, she’s started a company called Mercantile and Merchant, where she handles property development and interior design. This ultimately led her and Perella to collaborate on decisions like leaving the awkward niche next to the fireplace (a happy accident left over from construction) where it was and filling it up with firewood. “Sometimes our best design decisions start from midnight Instagram messages,” shares Perella.

Or sometimes those ideas spark from another design decision. After landing on the flying ducks wallpaper for the powder room, Donnelly and Perella turned to Urban Electric to create a custom-colored sconce that matches the birds’ heads perfectly. In the primary bathroom, a different bespoke job took place: a wall-to-wall wood vanity that’s loaded up with drawers (even though some of them are just for looks—they disguise plumbing).

“It looks like a piece of furniture,” says Perella, who took a similar approach with the kitchen island (the dainty legs look like they could be on the base of a wardrobe). Adding a skylight to the room was a factor of living in a tightly knit suburban neighborhood. No privacy would ever be had if there was a big picture window on the wall. “It’s right up against our neighbor’s house,” notes Donnelly.

Creating flow in the backyard was a top priority for Donnelly and her family, who at that point had not had the luxury of true L.A. indoor-outdoor entertaining. Lining the yard with gravel and drought-tolerant plants fit the climate but also helped create a sense of direction between the pool-slash-kitchen area and the firepit zone on the opposite side. “They feel like rooms,” she says. “I’m waiting for some things to grow a little more, and then there will be more surprises to come as you navigate the space.” This one gets our golden buzzer.