Plus five more swatches a designer swears by. 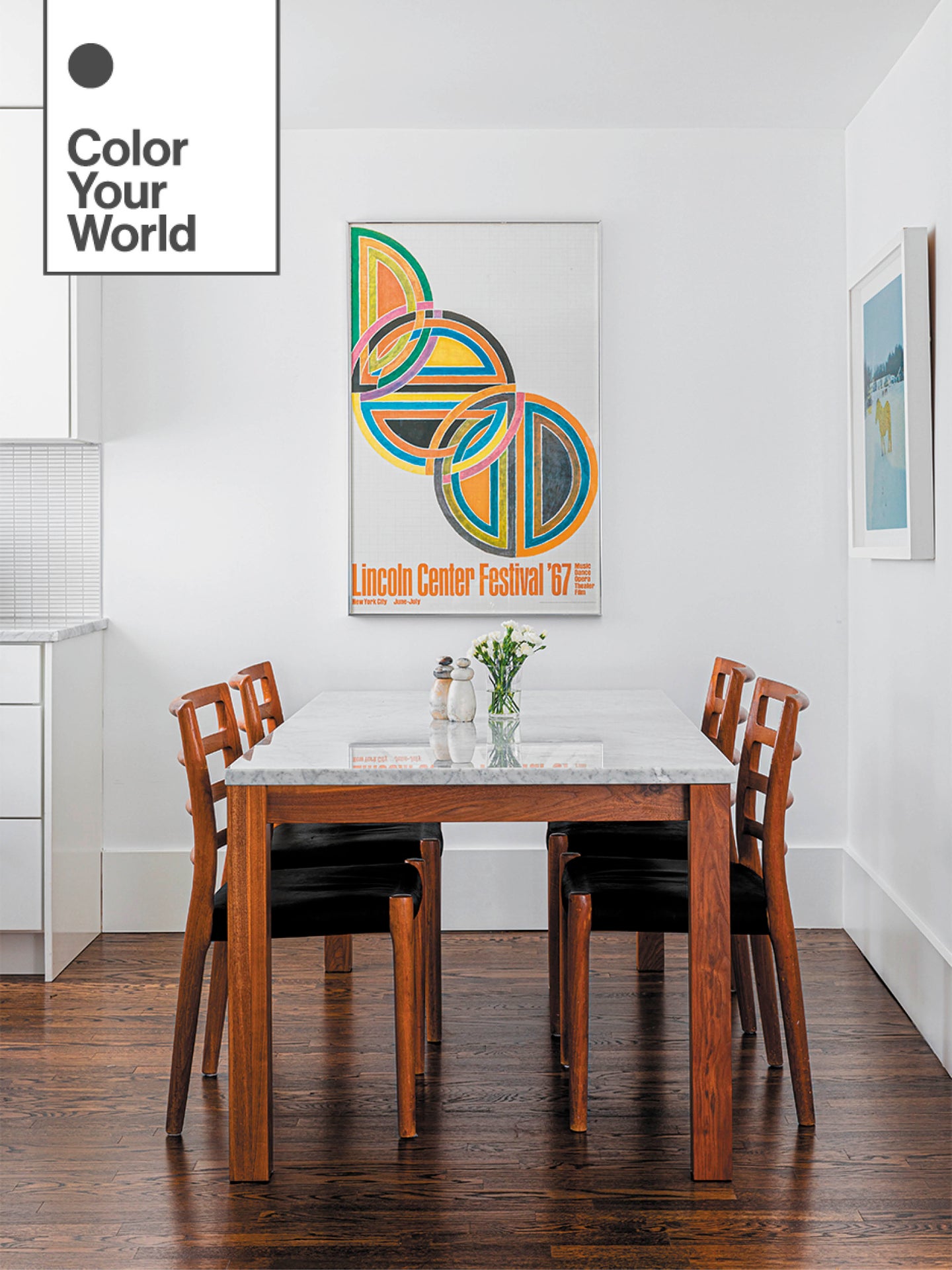 Some have described Benjamin Moore’s Chantilly Lace as a “good place to start,”while others concede it’s “great at hiding unusual architectural elements.” But to really get a sense of the fan-favorite white paint, you can’t just take people at their word—you’ve got to see it in action. “We joke it’s our house white,” says Hyphen & Co. founder and principal designer Shelly Lynch-Sparks. The hue came in especially handy when she signed on to renovate an apartment for a young couple expecting their first child. Almost every room in the 1,200-square-foot space in Manhattan’s West Village was a shade of pink—and not the millennial-approved kind. “The artwork needed to be the shining moment,” says Lynch-Sparks.

After making some much-needed functional updates like replacing the ’80s-era appliances and opening up the entryway, she coated almost every surface in the crisp, bright color, from the baseboards, beams, and doors (done in a semigloss finish) to the walls (finished in eggshell). “Everything needed to be neutral,” says the designer. Here are five pros to the fresh start.

It Lets You…Spotlight the Outdoors

Art isn’t the only thing on display—so are 11th-floor views of the West Village. To take advantage of the city scenery, Lynch-Sparks added a small floating countertop below the window. The ledge doubles as both a breakfast bar and an office. “Their schedules are a little bit funky, especially with a new baby, so we wanted a space where they can sit down with a laptop while also having a bowl of cereal,” she explains.

It Lets You…Wind Down in the Evenings

The bedroom is the only place the designer departed from Chantilly Lace, opting for a cooler-toned white called Calm (also by Benjamin Moore). “It’s hard to tell, but it’s a bit softer,” she says. Other whites she swears by include Simply White, White Dove, Cloud White, and Farrow & Ball’s All White.

In addition to building out cabinets around the window (the bench is there to hide the radiator), the designer added a small knee–height ledge behind the bed that acts as both a place to display art and charge their phones (there was no extra room for nightstands). “It’s functional and also decorative,” she says.

It Lets You… Keep a Nursery Gender Neutral

At the time of the renovation, the couple didn’t know the gender of their baby, so they stuck with the neutral wall theme and brought in personality with bright furnishings, like a cheetah-print rug from Anthropologie. Seamless-looking blackout shades provide an extra-soothing backdrop come nap time.

It Lets You…Play Up Wood Floors

Neon prints and velvet swivel chairs weren’t the only things that suddenly seemed bolder once the walls were coated in white. Lynch-Sparks refinished the floors throughout the apartment in a walnut stain and swathed the fireplace in black to create moments of contrast. “We wanted to bring out those rich tones in the space,” she says.

It Lets You…Veer From Standard Tile

All the millwork in the home was custom except for the main bathroom vanity (a Home Depot score). The budget buy only looks expensive thanks to the textured tiles behind it (the rectangles are a hair smaller than the standard subway) and the dark Schluter strip. The classics never have to be boring.