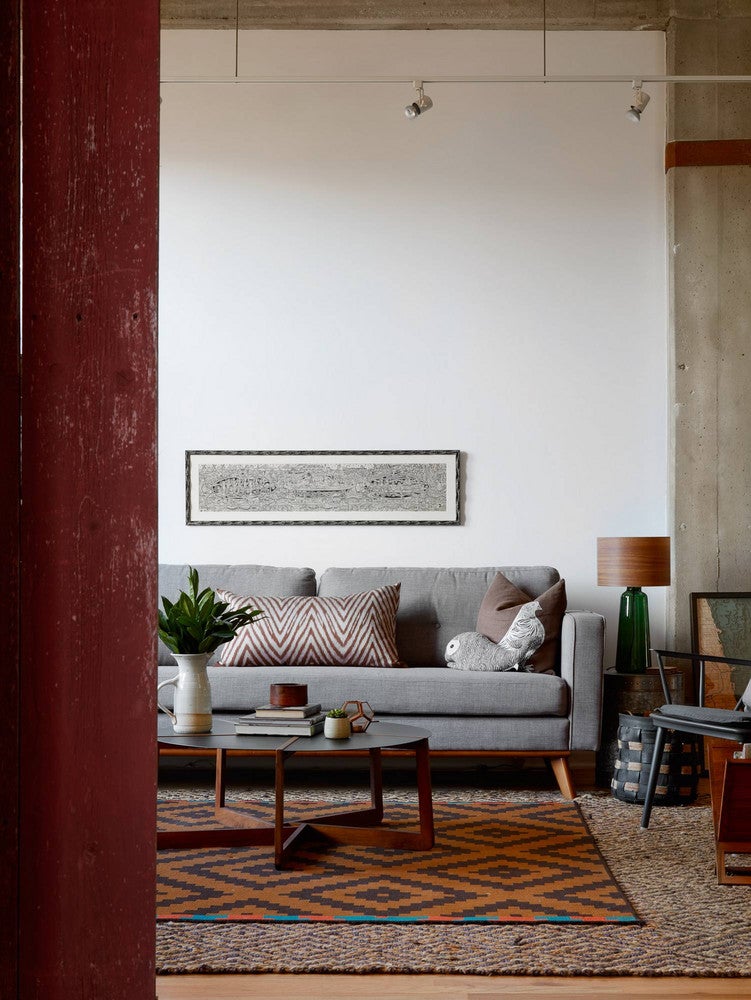 Chicago’s West Loop neighborhood is booming may be a bit of an understatement. An area just outside of city center, it was long associated with an industrial past of meatpacking (think Upton Sinclair’s The Jungle… shudder) and commercial storage. But in the last couple years, it has seen a complete transformation, first to happening restaurant destination and now to residential hot spot. It was only natural that when Jamie and Tyler, two Illinois natives, decided to put down roots, they were attracted to this bustling part of Chicago.

several years shuttling between Washington D.C. and Chicago. Having met on the first Obama campaign and subsequently serving time in the White House, it was time to head home. They found a fantastic industrial space dating to 1903, which had served as a factory and warehouse. It was in desperate need of updating, though, what with a distinct 90s vibe and dark detailing. Homepolish’s Jennifer Talbot was the expert to channel their request for a “industrial farmhouse chic” style into the space.

THOUGH THEY MAY BE

in the middle of a mega city, the new country charm is unmistakeable. A rustic barn door divides the living room and bedroom. Reclaimed wood shelves throughout hold paraphernalia and memorabilia. Cow’s tags hang on old jute ties, and kitchen pendants look almost like milk pails. They even have livestock… well, sort of. Does a life-size pig statue named Susan count?

“Tyler and I have spent the last 8 years bouncing between D.C. and Chicago, never in the same city for more than two years at a time. Moving home, for good this time, we were eager to create a home that we would be excited to live in for many, many years. We were attracted to Chicago’s West Loop because of the creative energy of the neighborhood and the wide open red-brick industrial look of the area. We found an amazing space in a beautiful old factory/warehouse space dating back to 1903 but the condo itself was badly in need of updating. Jen helped us craft a flow to the space that felt natural, inviting, and calming. She created such a strong aesthetic to our home, without ever feeling staged.”– JAMIE C., HOMEPOLISH CLIENT

This story originally ran on Homepolish.