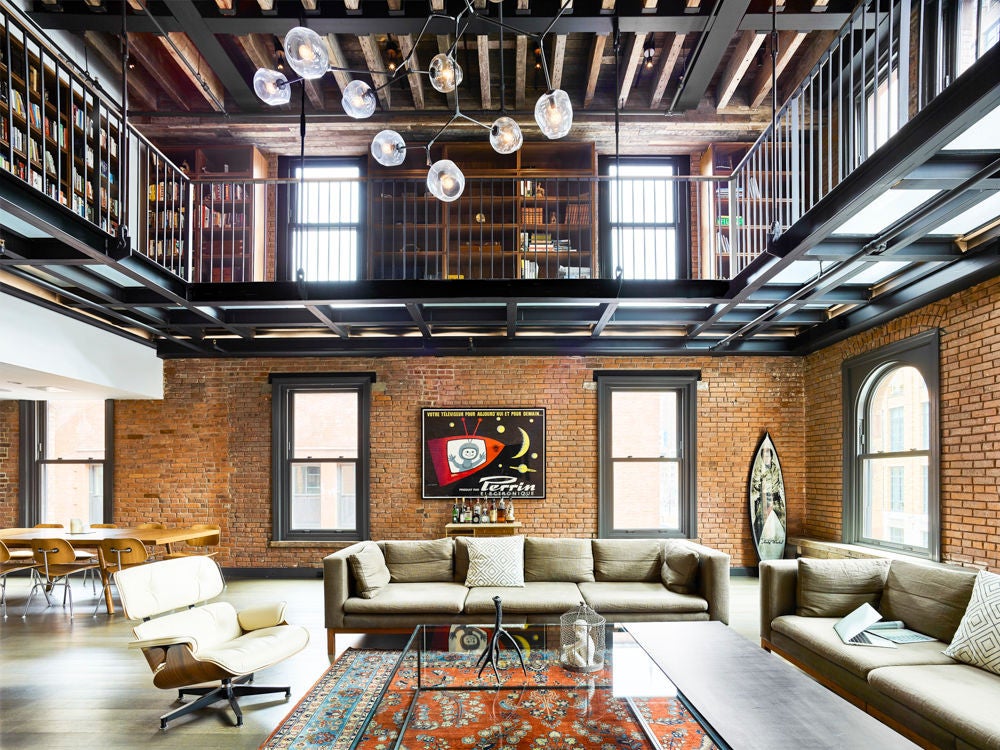 It’s an inspiring moment when we discover a little something special. Or in this case, a big something. Located in the Tribeca North Historic District, this building, originally constructed in 1892, was neglected for decades before its restoration. Exchanging hands over the years, the building’s current owner actually purchased this property on eBay! What you’ll see here are images of the building’s residence, which offers a warm, personal feel in a vast space that could easily have felt stark and cold. Learn more about this breathtaking project from the team chosen to bring the building back—with gusto, Eran Chen, Founder & Executive Director, ODA New York, and Ryoko Okada, Principal and Director of Interior Architecture/Design, ODA New York.

HOW DID THIS PROJECT COME ABOUT? Having moved through a couple of hands since 1892, the current owner bought the space on eBay and then hired ODA New York to restore the exterior facade, refurbish the interiors and build a 1000 sq. ft. space on the roof. Combined with the original upper two floors, we created a 14,000 sq. ft. triplex for the owner to call home.

THIS IS SUCH A SPACIOUS HOME. HOW TO YOU ADDRESS A MINIMALIST AESTHETIC WITHOUT MAKING THE SPACE FEEL EMPTY?  Many elements contribute to the general feel of a space; the size of the windows and the views through them, the finish material and texture of the room’s envelope, the proportions of the space and, of course, what’s inside. 10 Hubert rooms have a very rich envelope and very unique proportions that are both grand and intimate. The ceilings are clad with wood beams and the large deep wood windows frame the surrounding context beautifully. The structural elements that divide the space, like the stairs and gallery, were meticulously composed with details that would bring out the strong character. These elements were sufficient enough to create an incredibly warm space, allowing the rest to remain minimalist.

WHAT IS YOUR FAVORITE MEMORY OF THE DESIGN PROCESS? The building was bought on eBay, incredibly enough, and it had been owned for many years by an artist who was practically living in poverty. When we saw the space for the first time, we just couldn’t believe that someone could actually be living there in that state, as it looked like a stage set from Les Miserables. It certainly took imagination to realize it’s potential. But I think it’s an incredible NYC story because this poor artist became wealthy by selling the building, and the glory of this amazing historic building was brought back to life.

WHAT COMPONENT OF THE SPACE ARE YOU MOST PLEASED WITH?  The rooftop addition was quite an accomplishment. We had to demonstrate to the Landmarks Commission that it would not be visible from the street.  In effort to maximize its size yet still render it invisible to the street; we opted to use a very unique roofline that resembles many mechanical penthouse structures so common in Tribeca. The pragmatic solution matched the historic context and became one of the most striking spaces in the house

ADVICE YOU’VE EVER BEEN GIVEN?   ‘Design is not about how things are put together. It is about the space between them.’