What Comes After Terrazzo? We Asked 3 Interior Designers

The four predictions to know. 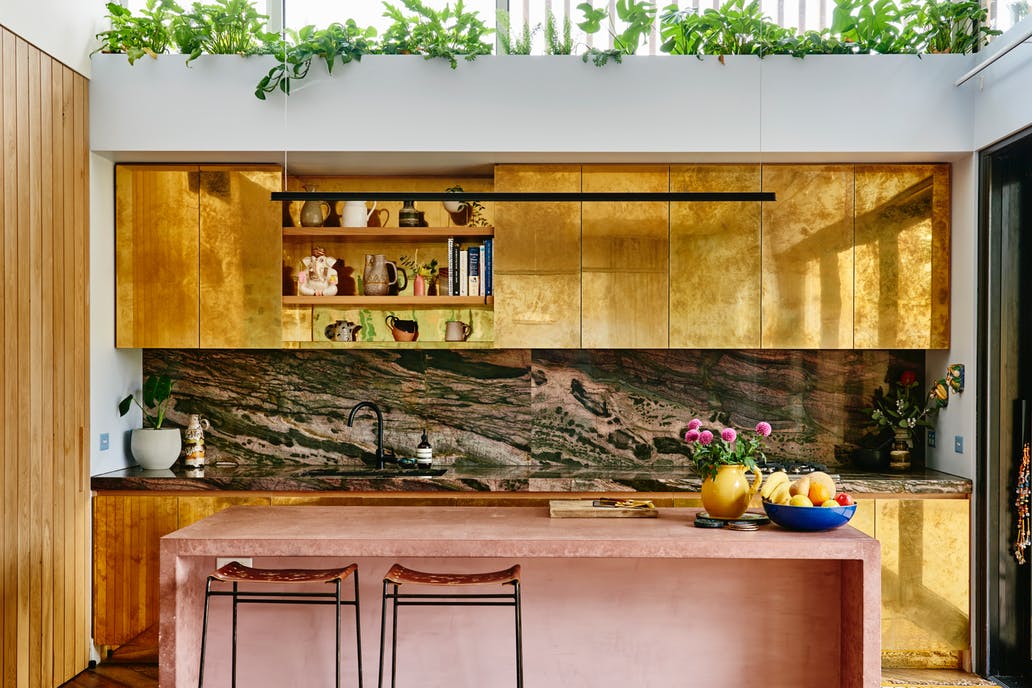 In 2016, we wrote about the return of terrazzo. This was slightly before the trend’s major resurgence—searches for the term exploded on Pinterest in 2017—but it wasn’t even close to being the first hint that this storied material would make a sweeping comeback. For this, we need to rewind all the way to 2014 to Dzek’s booth at Milan’s Salone del Mobile, which featured a collaboration with Max Lamb on a colorful and oversize terrazzo called “Marmoreal” that resembled chunky nougat.

Today, terrazzo is absolutely everywhere, from Mandy Moore’s living room to Anthropologie’s bath accessories. That’s the funny thing about trends: They trickle in slowly in tightly knit circles and proliferate until they reach a critical mass. From that point on, it’s only a matter of time before they reach overexposure and die a slow death. In Marketing 101 terms, we’re still basking somewhere in the early majority adoption of terrazzo, which means we still have a few good years left to enjoy the colorful and playful confetti-like pattern before we reach obsolescence.

“I love terrazzo and I definitely want to see more of it,” New York–based interior designer Jessie Schuster told us. “It’s amazing. It’s neutral but still fun.” Years after that faithful Dzek exhibition in Milan, she notes that she’s still obsessed with Max Lamb’s Marmoreal and regularly uses terrazzo in various projects, from NoHo’s healthful eatery Broken Coconut to residential projects around Manhattan. “Terrazzo is a great way to use a super-durable material that can be used in the home and a commercial space to give an old-world or Venetian feel. I’ve also noticed that people are starting to use terrazzo for accessories and furniture, which is so fun. It’s a great alternative to concrete.”

Across the world in Melbourne, Australia, Kip & Co.’s Alex McCabe is also on board with the terrazzo trend. “I think it’s incredibly versatile. You can have a subtle tonal terrazzo in white that is just a great way to elevate an all-white space, or you can go all-out and embrace golf ball–sized terrazzo in crazy colors,” she says, adding that she has both in her home: a blue terrazzo fireplace hearth and an off-white terrazzo in the bathroom.

Other interior designers approach terrazzo with a little more caution. “I have mixed feelings on terrazzo,” New York–based Emma Beryl told us. “In certain settings, when layered with other materials, I think it can offer a fun pop, but I also find it can swing toward cheesy pretty easily if used incorrectly. I also hesitate to use it because I find that the colorful varieties are so bold that they can date a room easily.”

As we took the pulse of terrazzo frenzy across the interior design world, we couldn’t help but think: What comes next? Which trendy material will take over once the material of the moment is put aside due to oversaturation? We asked this young crop of trendy and trusted interior designers what they believe will be the next It material.

“I’m loving Zellige tiles right now,” says Schuster, who recently used them in her room at the Kips Bay Decorator Showhouse in Palm Beach. “I love that they’re imperfect and bring a beautiful but raw feel to any project.” She isn’t the only designer to sing the praises of imperfect tile, as Beryl also remarked on their textured quality: “I still try to use handmade tiles whenever possible,” she says. “I love the depth, texture, and richness that they bring and that they are a little more storied.”

While Schuster highlighted terrazzo as a great alternative to concrete in our conversation, McCabe is noticing a bright new trend bubbling up down under: “We’re still seeing a lot of concrete in Australia right now,” she says. “It’s really cemented—no pun intended—its role as an architectural statement. Lately, though, we’re increasingly seeing colored concrete features.” McCabe herself has a bright pink concrete kitchen island in her sun-filled Melbourne home.

“In that vein, we’re also seeing an increase in rammed earth homes that are just to die for,” she adds. Rammed earth, also known as Taipa in Portuguese, is a wall construction technique that involves ramming a mixture of selected aggregates—gravel, sand, silt and a small amount of clay—into place between flat panels, creating beautiful earthy undulating motifs that resemble concrete.

We’ve seen the overhype of Carrara marble come and go, and some have even decried the danger of the precious stone potentially going extinct due to overharvesting. But these days, Beryl is interested in a different type of marble: “Although it’s a classic material, I’ve been seeing a lot of dramatic, high-contrast, heavily-veined marbles recently and I love it,” she told us. “I think this is a great alternative to terrazzo because it brings a lot of interest but feels more timeless to me.”

She isn’t the only one to be drawn to colored and dramatic marbles. Iterations of this trend can be found in many commercial and residential interiors like the West Village apartment above by designer Tali Roth.

“A trend I’m really into is 3-D printing,” Schuster told us. “You can basically create anything you can dream up and incorporate it into the architectural elements of a space.

What does 3-D printing look like in contemporary interior design, you ask? Fun fact: Recent applications of 3-D printing in interiors have used—wait for it—terrazzo infill to bring a new graphic dimension to the traditional material—yet another indicator that the trend is far from dead.

Brush up on more timely decor trends: Sure, Art Deco Is Nice, But Have You Heard of Art Nouveau? Fringe-Covered Decor Will Make Your Space Feel Extra-Playful And Suddenly, Tobia Scarpa Sofas Were Everywhere