Within a well-dressed Nashville barn, a cross-section of enterprising women in music, design, and food ﬁnds community around a Southern-slanted feast. 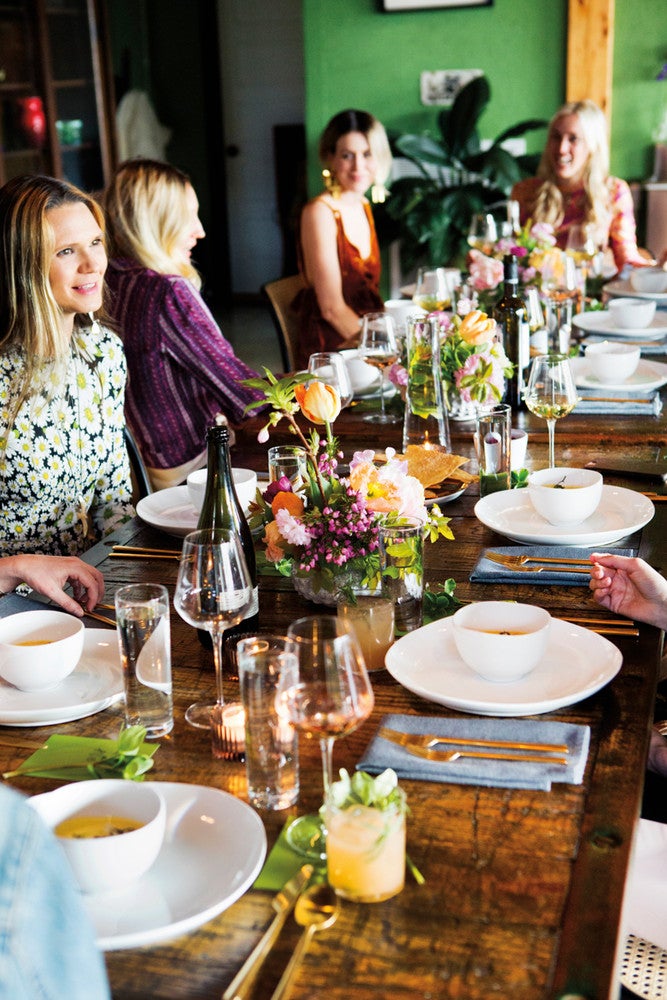 “I call it my man cave,” Jen Auerbach says with a sly smile, “but that probably doesn’t do it justice.” The British expat is referring to the sprawling, wood-beamed barn on her family’s ﬁve and a half acres outside Nashville, where the leaf green walls, velvet upholstery, and faded antique rugs reveal something of a woman’s touch—to use an old-fashioned phrase with the same time stamp as Auerbach’s yellow mid-century chaise.

Only the Harley-Davidson sign hints at the place’s origins. Three years ago, when she and her husband, musician and record producer Dan Auerbach, moved into the property’s 1905 stone house, they built the barn as a gloriﬁed garage for his collection of rare vintage motorcycles.

But it wasn’t long before she envisioned her own use for the space: as a sunlit production facility for Clary Collection, the botanical skin-care line that she founded with her friend, Adriel Denae. Out went the Harleys for long-term display at a local museum; in came the century-old apothecary cabinets and jars of dried calendula ﬂowers.

“Our name comes from the herb clary sage, which means clarity and calm, and that’s what the barn brings to me and all my girlfriends who seek solace there,” says Auerbach, describing how the plush sofas serve as a momentary pit stop from the go-go-go of work and family life. (She has a nearly 3-year-old son, Early, with Dan, in addition to a 10-year-old stepdaughter, Sadie.) And every month or so Auerbach hosts a laid-back dinner with a group of “badass working women in Nashville.”

That’s what happened on a recent evening, the weather balmy enough to open the barn’s garage-style doors to the nearby lilac trees. Julia Sullivan, the chef behind nearby restaurant and oyster bar Henrietta Red, had organized a panel the previous day featuring women in food. She and Julia Sherman—whose Brooklyn-based website, Salad for President, spawned a recent cookbook—conspired to join forces for a Southern-themed dinner party at Auerbach’s.

“To collaborate on a menu from afar and then to jump into the kitchen is a nerve-racking thing,” says Sherman, with all due respect for serious kitchen chops (Sullivan is an alum of Per Se in Manhattan and Blue Hill at Stone Barns). “What I found was a shocking amount of space for my ideas.”

Not to mention room for her inspired ﬂavor hacks. Fresh from running a pop-up café in Mexico, Sherman arrived with a suitcase full of dried chiles—just what you need to dial up an arugula-chicken salad in a city ﬂuent in hot sauce.

The meal was a mash note to tradition with outlier twists. Sullivan, known for her ﬂair with seafood, topped deviled eggs with smoked trout and a ribbon of the ﬂash-fried skin; the vegan chilled corn soup revealed her innate hospitality (“You never know who is going to show up and have restrictions”).

A riff on potato salad featured a creamy miso dressing from Sherman’s book, along with frilly mustard greens, nigella seeds, and Henrietta Red’s house-made kimchi. And for ﬁnger food, the Julias ﬁnessed a local classic—tomato and mayo on white bread—using herbed aioli on sourdough, with roasted yellow tomatoes and heirlooms (a trick for concentrating ﬂavor before peak season).

If the kitchen brimmed with a spirit of cross-pollination, so did the dinner table, where the mix of guests included an ER doctor, antiques dealer, photographer, and boutique owner. Artist Vadis Turner—a Nashville native who, like Sullivan, spent years in New York, only to return to ﬁnd a thriving creative scene at home—swapped stories with Ruby Stewart, a more recent transplant by way of Los Angeles (a musician like her father, Rod Stewart, she’s at work on a forthcoming album).

For both of them, the Tennessee city’s opportunities go beyond the artistic. “It’s very community based: You show up for people; they show up for you,” says Stewart, recalling how neighbors showered her doorstep with welcome gifts—“something I never experienced when I moved into my apartment on La Brea and Sunset.”

Some of the strongest bonds, though, have emerged in circles like this one, blossoming through work liaisons or conversations around motherhood. “It’s an energy that feels really good to me,” says Sherman, who sees the Nashville dinner akin to the ladies’ nights at her own brownstone: humming, wine-fueled gatherings with writers, curators, and chefs.

“It’s very instinctual,” she notes of the urge to bring everyone together. “Great things always come of it.” This evening was no different, with new friends and old getting into the groove—complete with impromptu dancing.

Sounds of the South Black Keys frontman Dan Auerbach put together the playlist, with hometown picks (Katie Schecter) alongside callbacks to his wife’s London days (The Pretenders).

“Never be Together” The Pretenders

“Pictures of You” Sonny Smith

Muddle tarragon (just enough to break up the leaves) with the rest of the ingredients.

To make simple syrup: Mix ½ cup water and ½ cup sugar in a pot over low heat. Stir until sugar has dissolved without bringing to a boil. Let cool.

Shake all ingredients together, strain into a Collins glass with ice, and top with soda water. 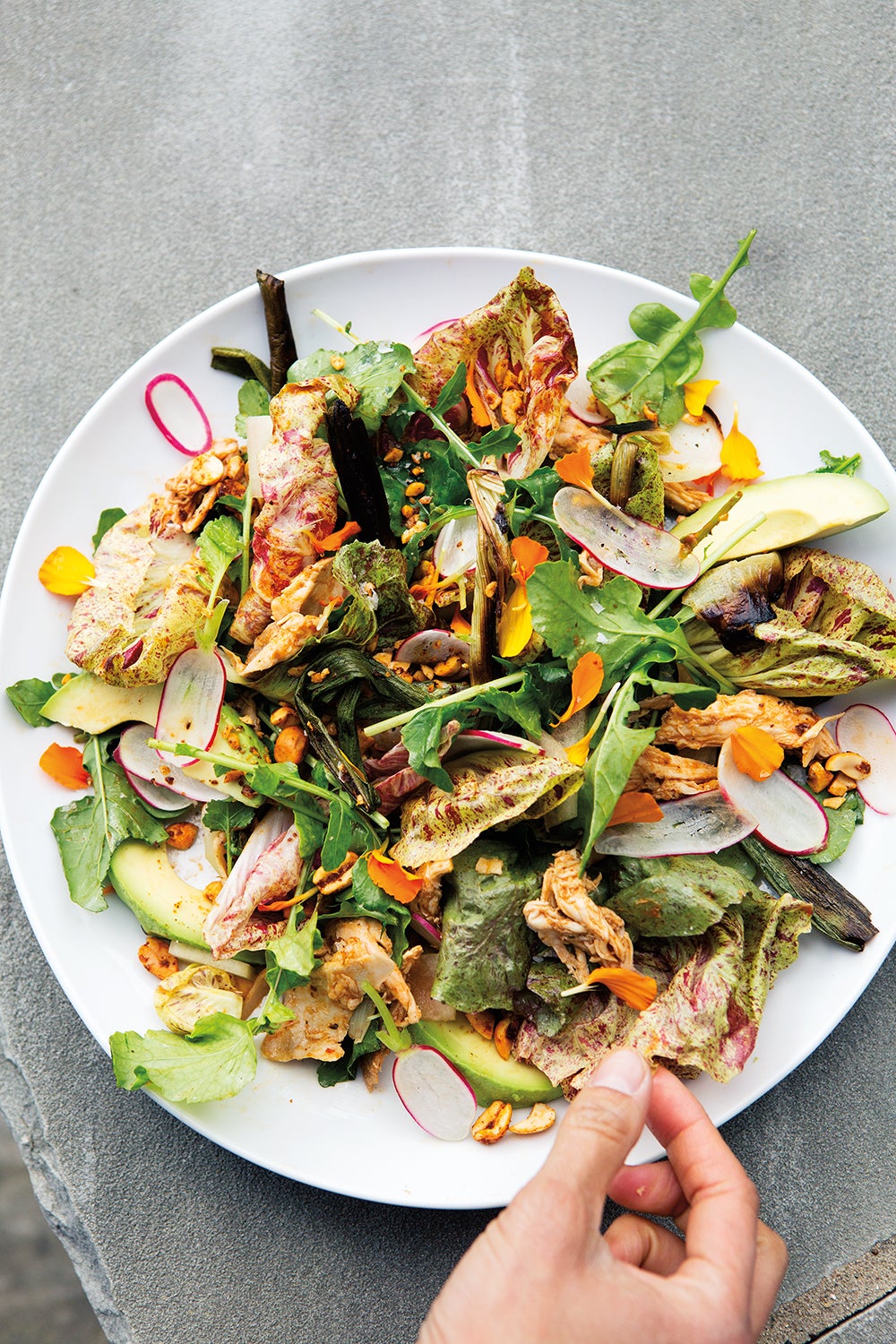 In a hot, dry skillet, toast red onion, garlic clove with the skin, star anise, and dried chiles, removing the chiles and anise when they are fragrant but not burned. Allow the onion and garlic to blacken.

Add water and vinegar to a small saucepan with peeled garlic, brown sugar, salt, star anise, and bay leaf, and bring to a boil. Add chiles, reduce to a simmer, and cook, uncovered, for 15 minutes.

Transfer the chiles and vinegar mixture to a blender, and puree until smooth. Pour the puree into a jar, and add  cup of it back to the blender with the juice of 2 limes. With the blender running, add the oil in a steady stream, until emulsiﬁed and creamy.

Dress the chicken with the oil-less chile mixture to your taste, about  to ½ cup for half a chicken will su∞ce (save the extra for use in soups, dips, or as a marinade for meat). Stir to evenly coat, adding minced Thai chile if you want extra heat.

In a hot, dry skillet, char sliced spring onion on both sides, 3 minutes each side. It should be nice and blackened.

Toss greens with half the prepared dressing, season with a pinch of flaky sea salt, and toss to coat (use your hands; it would be gentler on the greens). Tuck dressed chicken in and around the greens, as opposed to piling it on top. Add charred onion, avocado, peanuts, and pickled watermelon rind (recipe below), and garnish with nasturtium and cilantro. Serve extra dressing on the side.

Heat grape-seed oil over medium-high heat. Sweat onion until translucent, add fennel and carrot, and continue sweating until they begin to soften. Add garlic and serrano pepper, and sweat until fragrant. Add corn kernels and cook, stirring occasionally, until they begin to caramelize. Add coconut milk and vegetable stock, whisk together, and bring to a simmer. Add star anise and tarragon. Simmer, stirring occasionally, until corn is tender (about 20 to 30 minutes).

Transfer soup to a blender, not ﬁlling more than halfway at a time. Cover top with a kitchen towel and start blending slowly, gradually increasing to high speed. Puree until smooth, adjusting seasoning to taste. Continue to puree soup in batches. Strain through a ﬁne sieve into a clean pot or bowl, using the back of a ladle to help push it through. Discard solids. Adjust seasoning with salt and pepper.

Chill soup for 6 hours to overnight. Stir in lime juice.

This story originally appeared in the summer 2018 issue with the headline “Band of Insiders.”