the most scene-stealing spot in austin 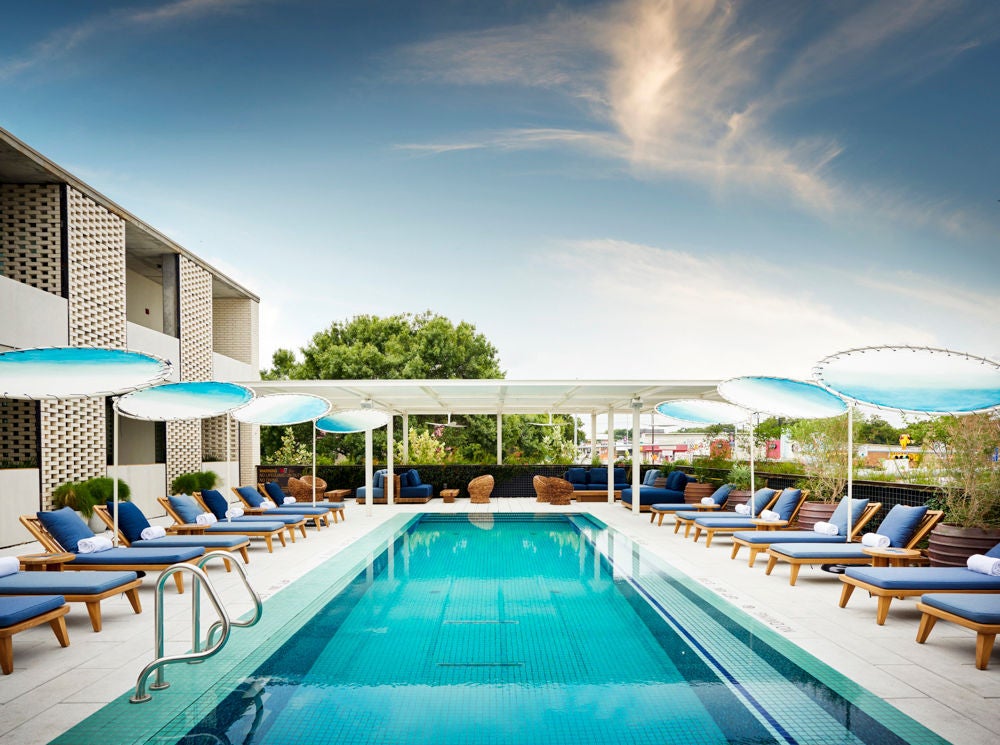 It’s a good idea to have a go-to place to stay the Texas capitol. It’s the perfect quick weekend away city, full of music, culture, and new hotspots popping up constantly.South Congress Hotel is officially open, offering visitors haute lodging in one of the city’s most explorable neighborhoods. And that pool tho. Learn more about Austin’s newest must-get reservation from Jesse Herman, Partner at New Waterloo.

WHAT INSPIRED TO CONCEPT FOR THE SOUTH CONGRESS HOTEL? The inspiration behind South Congress Hotel was to build more than just a great hotel for Austin and the neighborhoods it sits between. It is so much more—there are three restaurants, five shops including the motorcycle store Revival Cycles, a nail salon from NYC called tenoverten and local favorite boutique Sunroom, as well as three bars, a coffee shop, juice bar and more. So it was really building a whole host of new businesses and amenities at once that is meant to serve as a hub for people to meet and gather in the heart of Austin’s South Congress district.

WERE THERE SPECIFIC DESIGN GOALS IN MIND FOR THE SPACE? I wanted it to seem organic in design, in that even though it’s a new building, the time period of construction and design is not so easy to put your finger on. There are California-inspired elements, a little mid-century, and a bit of Brazilian modernism. The goal was to not really be able to describe the design as a ‘concept’ or to have any specific goals other than creating a hotel that fit well into its surroundings.

HOW DO YOU GO ABOUT PLANNING SUCH A LARGE SCALE DESIGN PROJECT? Never having built a hotel from the ground-up, it was a daunting amount of work. Our team has been working on it for almost three years. That’s a lot of time to get organized and accomplish everything, but it’s still three full years of work. I’m lucky to have really great partners and an excellent team at New Waterloo.

DID YOU HAVE THE CHANCE TO WORK WITH LOCAL AUSTIN DESIGNERS/BRANDS WHEN STYLING THE SPACE? Two of the architects were both from Austin, and we worked with interior designers from Los Angeles. In addition, we worked with lots of local artists, artisans and craftspeople on everything from the art in the rooms and restaurants to collaboratively designed products that we sell in our shop.

WHAT COMPONENT OF THE FINAL OUTCOME ARE YOU MOST PLEASED WITH? Well, we have the hotel and the first restaurant open, with the rest of the shops and restaurants scheduled to open in the next few months. I think at that point I might be able to reflect on what I’m most pleased with, but as of now we still have our heads down working!

WHAT IS THE BEST GUEST REACTION YOU’VE HEARD SO FAR? One of our guests told me it looks like it has been there forever. That’s the greatest compliment we could get on this project.

WHAT IS YOUR PERSONAL FAVORITE MEMORY OF THIS PROJECT? Probably all of the incredibly creative and hard working people that we’ve gotten to meet throughout this whole process. It really takes a small army to pull off something like this.

WHO SHOULD STAY AT THE SOUTH CONGRESS HOTEL? Anyone looking for a uniquely Austin experience when they’re visiting. The hotel reflects so much of this city and life here. We’ve already had such a crazy cross section of people stay with us just in our first month, from rock stars who were headlining ACL like The Strokes to Formula 1 drivers and their families. We even had A$AP Rocky play at the pool the second week we were open.

WHAT ARE YOUR FAVORITE NEARBY RESTAURANTS/SHOPS? Besides the shops and restaurants in the hotel, I love Sway (for Thai food), Home Slice Pizza (for pizza), Big Top Candy Shop (for something sweet), Uncommon Objects (for a unique shopping experience), and Continental Club and C-Boy’s Heart & Soul (for live music).

WHAT IS ONE THING YOU WISH EVERYONE KNEW ABOUT THE HOTEL? It’s really a reflection of all of my partners and myself—the design, the food, everything down to the smell of the hotel.