You’ve Never Seen a Studio Apartment Bedroom Quite Like This 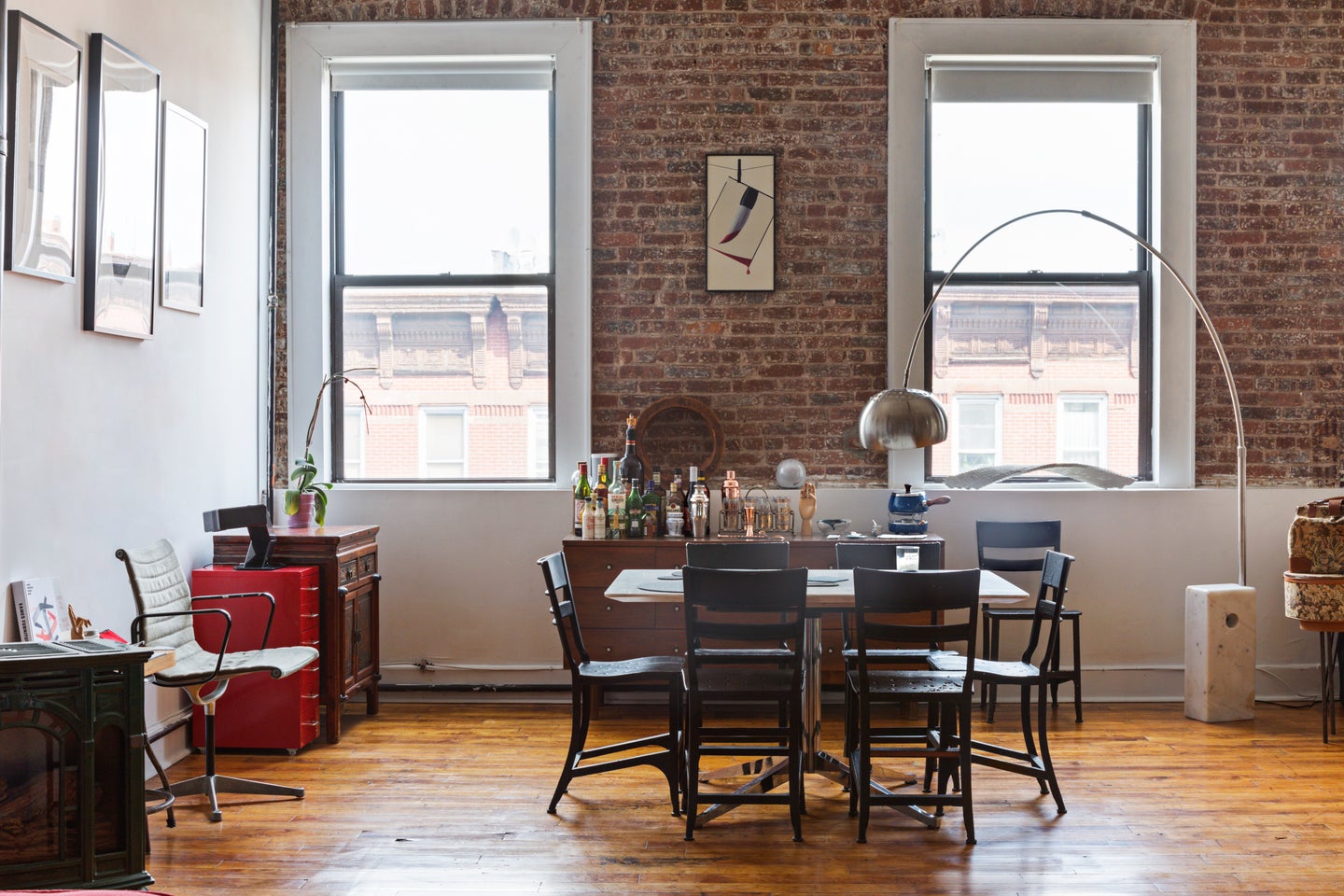 Not unlike her transformative creations, Arielle Assouline-Lichten’s Greenpoint apartment has been privy to same experimental spirit that has long informed the Brooklyn-based designer’s unwavering infatuation for found goods and leftover materials. Now a burgeoning force in the world of furniture—four years ago, Assouline-Lichten founded Slash Objects, a sculptural line of accessories and home furnishings primarily comprised of recycled rubber—, her introduction to interiors was anything but expected.

With a background in graphic design and architecture (Assouline-Lichten went on to work for big-name firms like Kengo Kuma and Associates and Bjarke Ingels Group after receiving her masters from the Harvard Graduate School of Design), it wasn’t until the Philadelphia-born creative encountered her now-signature speckled rubber surfaces while working on a high-end residential project that she even considered the possibility of breaking into product design.

“I knew I wasn’t going to be a traditional architect,” recalls Assouline-Lichten. “I was more interested in the process of learning all the different ways materials are transformed in the building process and all the tools that are used by different makers and fabricators to produce whatever their end result is. I spent a lot of time making models in the shop and working with the robots and pushing what my knowledge level was because I was so fascinated by this idea of taking something and transforming it into this new state of existence.”

The designer has applied this same sensibility to her sun-drenched apartment. Along with her own creations that are thoughtfully scattered about the space, her home as a whole is a testament to the art of juxtaposition. After a brief post-breakup stint of “couch surfing and showering at the gym”, by the graces of the real estate gods, Assouline-Lichten stumbled upon this lofted studio by chance.

“It seemed too good to be true,” she says of discovering the listing. Situated in what was once an old post office building, the designer enjoys a privilege few New Yorkers will ever know: Living in a landmarked building. “It had been listed for a few months and I was like, ‘There’s no way this apartment is real.’ I think it was just this weird fluke where I got lucky and I walked in and it was my dream apartment.”

In many ways, Assouline-Lichten has her apartment to thank for her inspired designs and products. “All my fabricators and favorite marble yards are in my neighborhood,” she says. “I think that whole aspect made it possible for me to make the collection.”

With little reason (or want) to hide her guilty pleasure from the world, Assouline-Lichten’s chair obsession is obvious from the minute you step through the front door. While her curated collection of seats spans the spectrum from vintage to contemporary, each new piece ultimately builds upon the vision of the last.

Opposite from her red velvet sofa in the living room sit two matching mid-century lounge chairs by acclaimed Swedish furniture designer Arne Norell, which were actually sourced from the streets of New York. “Those, we found on the sidewalk in Tribeca in the trash. They just looked like they were something important and somebody didn’t know what they were getting rid of.”

Assouline-Lichten’s growing amalgamation of cushy seating options also includes an original Eames chair, which her mom snagged from an old warehouse (“She saw a guy sitting on it and knew it was an original because of the legs, so she offered him to trade and he was so excited because it’s really not that comfortable”), and a puffy blue piece by Michael Felix—her favorite seat in the house.

“It’s probably the first piece of furniture that I bought from a contemporary designer who is somewhat of a colleague and it has lived up to all my expectations.  I wanted something really cozy to contrast a lot of my pieces that are either cold or have sharp angles, so, to me, it gives the right balance,” she says of the cloud-like cushion. “And I love that I met the person who made it.”

In addition to recycled rubber, Assouline-Lichten’s pieces also explore the use of metals and stone. Marble has proved to be a special point of fascination for the designer, who often uses the material as a jumping off point for experimenting with angular forms. “I definitely love to play with geometry, but I think there’s an element of flair or quirk that I infuse to add a little bit of intrigue, and to make the person experiencing the piece question how it was made or what it’s made of—or even how it’s possible that it comes together in the way that it does!” explains the designer.

Topped with a remnant slab she snagged at a nearby marble yard, the console table in the entryway with double hexagonal legs speaks to her trained eye for fresh shapes and unexpected forms.

In lieu of a standard coffee table, Assouline-Lichten plopped a cloud-like marble cutout atop two of her rubber sill side tables. Now a sculptural and functional statement piece, the table’s endearing shape is, in fact, the product of necessity. There’s a giant water stain on the original slab Assouline-Lichten needed to hide. Doing what she does best, the designer turned the rejected stone into an inspired surface for the home.

“I started Slash Objects with the desire to have these projects in my house, so everything that I made, I would bring home and use it, see how it would react in the dishwasher, or do different things to make sure that it was going to last and be able to be used in the way that I wanted it to be used,” she shares.

While her furniture, artwork, and other collected artifacts are clearly the focus of this story, one “wow” moment takes the narrative to the next level. Snuggled within the safety of a screened-in corner, Assouline-Lichten’s serene studio dwelling (which existed before she moved into the apartment four years ago) appears to pay homage to traditional Japanese bedroom design.

“It’s just the coziest space. I love it. And you can never have a messy room!” she laughs. “Since the ceilings are pretty high in the apartment, if you were just sleeping in the room with all this space around you, you would feel really weird.”

Hoping to expand upon her already-broad range of product offerings (currently, Slash Objects sells everything from tables to mirrors to coasters), Assouline-Lichten’s next big plans are actually centered around the bedroom.

“Right now, I’m working on a daybed which is going to be revealed in the next few months. I think it’s going to be a gorgeous piece. A lot of the furniture I’ve made up until now have been tables and accent furniture, so getting a little closer to the everyday, lived-in aspect of furniture-making is exciting.”

Armed with an artful eye and insider knowledge, we asked Assouline-Lichten to share the artists, makers, and designers that are currently on her radar. Here are a few fellow creatives she’s loving on Instagram right now.

Tour more homes we love: Bold Brazilian Style Meets American Mid-Century In This Upstate Hideaway This Scandi-Inspired Farmhouse Is Cooler Than Anything You’ve Seen on Fixer-Upper A Dark and Dated Condo Gets a Bright, Coastal Makeover