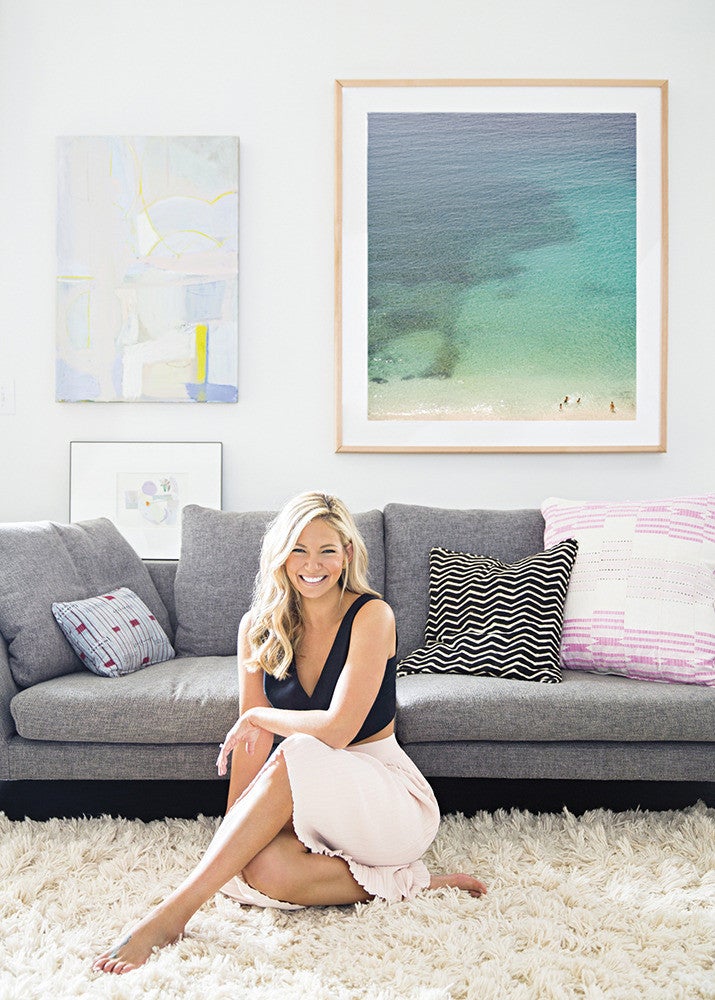 Benedict relaxes in her living room before two of her own works (from top, Fans and Premier Mini Face) as well as an aerial photograph by Sam Kweskin.

“We’ve only bought a handful of items for this house so far; we believe the most natural way to decorate is to fill a space with pieces you collect over time.”

The sunken dining room, with its blend of seemingly disparate styles, strikes a nonchalant tone. An iron orb chandelier hangs above a custom table by Georgia Harvest Tables and a grouping of vintage chairs.

Create an entertaining nook with a well-stocked bar.

Sally and her husband, George, hail from a similar artistic background. “We both grew up around the same kind of ‘collecting’ mind-set,” Benedict says, “so it’s been fun for us to try to make things work and move things around. It’s a
constant puzzle.”

Since she first began painting professionally in Charleston, Benedict has gained a devoted
following for her fresh and spirited artworks. And this September, her collection of wall
coverings will be introduced as part of a group show in Atlanta.

Flooded with natural light, Benedict’s studio is a refuge for unfettered thought and expression.

A vintage rug serves as a coverlet at the foot of a bed designed by Charleston architect Will Wingfield.

In the guest bedroom, cool white linens are juxtaposed with the headboard’s tribal mud-cloth printed cover. “I’m most drawn to obvious contrast, subtle texture, and bold color,” says Benedict. “These elements are equally important—and striking the right balance is
an everyday challenge for me as a working artist.”

The living room’s understated fireplace creates a simple backdrop for an eclectic grouping, including a mixed-media piece by Benedict.

Adhering to classical principles of symmetry and scale, Benedict crafted a serene upstairs work area. The yellow lacquered side table, flanked by two pink womb-like chairs, sits
in front of a series of geometric studies by artist Tom Herbert.

Necessity mandated a computer nook; here, Benedict softened the space with a vintage rug, a lacquered desk, and floor pillows her husband nabbed at an estate sale.

Global influences converge in River’s room: a skirted side table in vivid Mexican Otomi needlework adds a playful touch, while the contemporary crib contributes to an overall sense of lightness.

“We’ve only bought a handful of items for this house so far; we believe the most natural way to decorate is to fill a space with pieces you collect over time,” says Benedict.

An antique French commode makes for an unexpected companion to a painting
by domino favorite Mary Nelson Sinclair. “We have some amazing artist friends,” says Benedict, “and getting to gaze at their work is always a great escape.”

As they’ve gradually furnished their space, Benedict and Read have aimed
to create a home that communicates the hospitable coastal attitude of Charleston, South Carolina, where they first met.