The DIY Bookshelf in This Stylist’s L.A. Loft Doubles as a Seriously Cool Room Divider 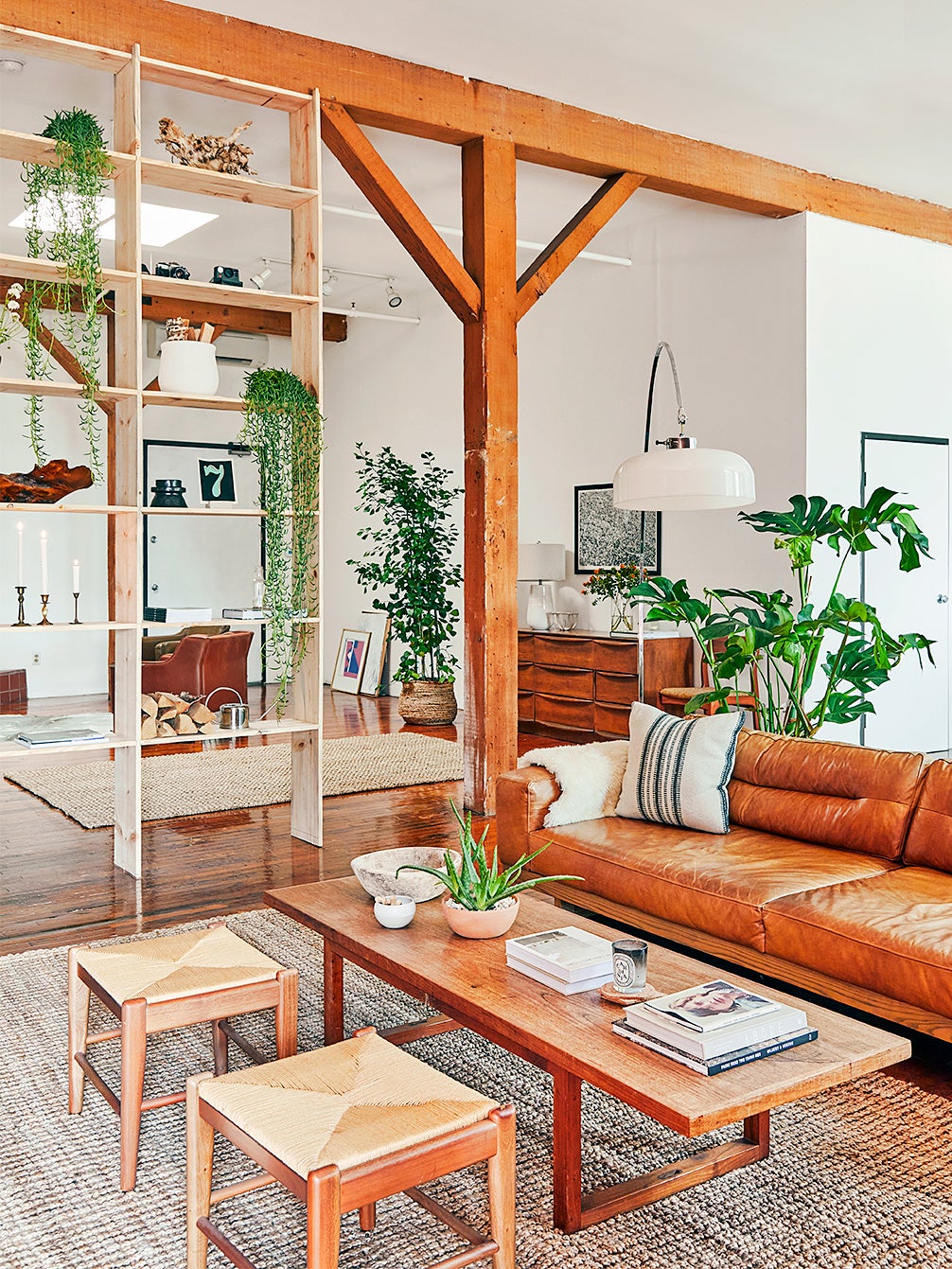 It wasn’t until Bronte Athearn and her partner, Jordan, moved into a Ram Promaster for six months at the beginning of the pandemic that Athearn really understood the importance of storage. “Be it a small or large space—you have to give yourself a place to keep the things that you really need,” she says. After traveling off the grid and working remotely for half of the year, the couple put down roots in a loft apartment in Los Angeles. And though the 1,200-square-foot rental offers way more room to roam than their previous abode on wheels, Athearn faced a familiar problem: the need for storage. “There’s only one closet, and it’s pretty small, plus a tiny cubby above the door,” she explains. “We had to find some solutions.” Cue the 12-foot-tall, 8-foot-long bookshelf. “It was definitely the biggest game changer,” she adds.

As an interior stylist, who has worked with the likes of Leanne Ford and Anita Yokota, Athearn’s job requires her to collect a lot of objects. So having a place to store books wasn’t her only goal—she’s also got taper candles, vases, firewood (for the nearby stove), and other knickknacks that are begging to be displayed. “I wanted a place that would be a showstopper, so when people walk in, they see all the things that Jordan and I love on this wall,” says Athearn. The bonus? It also serves as a divider between the living room and the bedroom.

A Stroke of Luck

The couple asked a few friends in the construction business, including the person who helped them trick out their van, how much a floor-to-ceiling shelving system would cost. Their answers ranged from $4,000 to $7,000. “We almost scrapped the idea altogether,” says Athearn. The reason? Lumber prices went through the roof during the pandemic. Fortunately the couple remembered that Jordan’s dad, Mark, a longtime contractor, might be able to help them source construction pine. “He knew a guy in San Diego who could get us the wood for $9 per slab,” she continues. “It reduced the cost significantly.” Their all-in budget for labor and materials ended up being $500.

A New Kind of Support System

Athearn designed the bookshelf to wrap around the existing beams that have been there since the early 1900s. Rather than take the shelving all the way to the centermost pole, however, she left room for a small walkway. At the top, the wood pieces have been cut to curve around the base of the ceiling beam, making the structure look like it was always meant to be there and “not just a piece of furniture we built,” she explains.

On the day of the installation, they realized all the old floors were slightly slanted, so Mark ended up having to cut each vertical piece to be slightly different heights; that way the shelves looked straight. Athearn debated painting the pine but ultimately decided to let the raw material patina and change over time with wear and tear.

Athearn designed each of the shelving nooks to be 1 foot tall so she would have enough space to display taller items, including pots of trailing greenery that act as curtains. “Jordan was like, you built a bookshelf and you don’t want to fill it with books?” she says, laughing. Her top styling tip: Create cohesion by putting similar-colored objects next to each other, but mix up the shapes and sizes to add dimension. “They don’t necessarily have to be identical, but if you find a common thread, it can work,” she suggests.

Step two: Bring the outdoors in. Athearn collected rocks, branches, and even leaves on their van adventure and now displays them on the shelf as a reminder of each place that they visited. “I was able to just decompress, not be so caught up in social media and what’s happening in the world, and just really be in the moment,” she says. Finally, pick things that are going to look good on both sides of the structure.

A Sense of Separation

The divider effectively turned the pair’s open and airy loft into a one-bedroom apartment. “We don’t have a guest room, so when friends come to visit, they crash on the couch,” she says. Sure, they can still see one another, but at least now there is a sense of a little privacy. The barrier also means that guests aren’t tempted to use the bed as a second sofa when they’re just hanging out. “Everyone feels comfortable,” she says. Boundaries are always a good thing.