12 Restaurants Worth Visiting Just for the Art

The connection between food and art has never been greater. 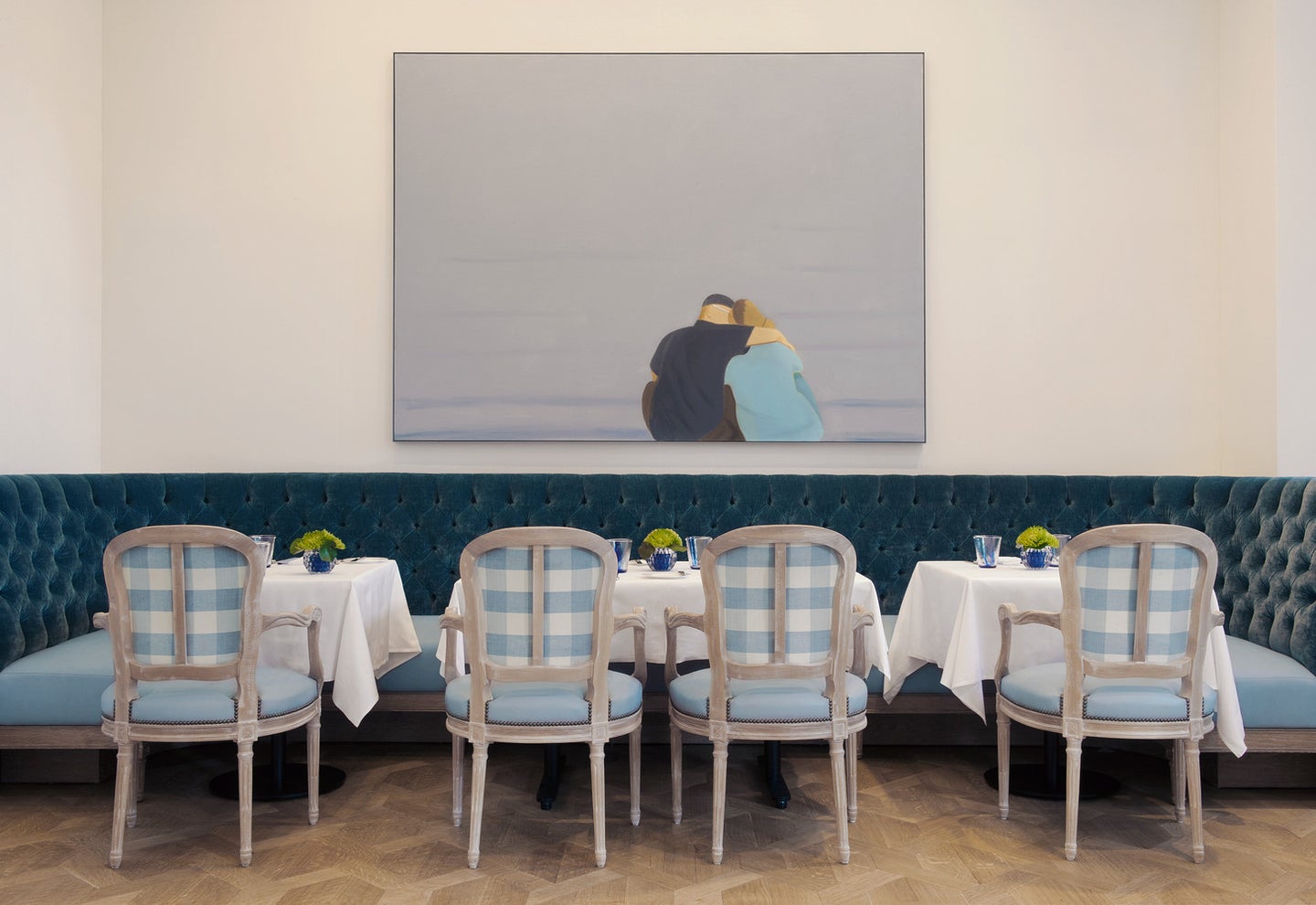 Urban and rural restaurants alike are stepping up their in-house art installations to achieve a curated look. Here are 12 of our favorite works on display and where to find them—so you can enjoy the view while you dine.

Included in the private art collection of the new Baccarat Hotel in Midtown Manhattan is the bar’s museum-quality selection of works by Robert Longo, Ellen von Unwerth, Slim Aarons, Donald Baechler, Nan Goldin, and John Chamberlain. The lounge features 100 works of art including sculpture and photography, which have been curated for the hotel by French husband and wife team Stéphanie and Frédéric Chambre.

CUT by Wolfgang Puck at the Four Seasons Hotel New York Downtown is the Financial District’s new playground. In the steakhouse’s main dining room, designed by Studio Jacques Garcia in collaboration with Kimberly Brown and Strata Architects, Alex Israel’s The Chef (2016) canvas is the centerpiece. The diptych is a collaboration between Israel and author Bret Easton Ellis and was commissioned specifically for the restaurant—it can be loosely interpreted as a portrait of Chef Puck and his wife Gelila Assefa Puck. With their floating captions and outsized dimensions, Israel and Ellis’ paintings resemble the opening credits of feature films and the billboards of the Sunset Strip, the site of Puck’s original Spago restaurant.

The Peninsula Beverly Hills just debuted a new collection of privately-curated art at its newly remodeled restaurant, The Belvedere. The restaurant’s cheerful interior serves as the perfect backdrop for 11 works by international artists such as Yayoi Kusama, Sean Scully, and Robert Indiana, as well a striking Fabienne Verdier piece commissioned specifically for the restaurant. Alex Katz’s Anniversary (2003) canvas is another standout.

Chef Daniel Boulud and Brazilian artist Vik Muniz have been friends years and decided to collaborate on a special painting series for the restaurant Bar Boulud, near Lincoln Center. The series, called “Tâches de Vin” (or “wine stains”) hangs along the right-hand booths under the restaurant’s barrel vaulted ceiling. Muniz, who is known for painting in unexpected materials and then producing high resolution photos of his work, applied the wines to a series of linen napkins. “When I proposed the idea to Vik, I explained that wine would take a big role at the restaurant, especially Burgundy, pinot noir, and shiraz,” explains Chef Boulud. “He said we should start by drinking some and then decide what we’re going do. The wine made him think of a party and what’s left when it’s over—the stain on the table that reminds you of a good time.”

The Bar & Lounge at the Bel-Air Hotel in Los Angeles features black and white, life-sized celebrity portraits by rock and roll photographer Norman Seeff. The stunning images are the result of several exclusive 1980s photo sessions with stars like Tina Turner, Mick Jagger, Ray Charles, John Belushi, Cher, and Steve Jobs. His work has been featured on the covers of Time, Rolling Stone, Esquire, Interview, and more, and his photo genius was also behind Apple’s famous “Think Different” 1997 campaign.

The new Freds Restaurant at Barneys in Chelsea features a 36-foot wide, site-specific mural by Los Angeles-based painter Conor Thompson, which serves as a unique design focal point in the restaurant’s dining room. In the vibrant panoramic oil painting, Thompson merges figurative and abstract elements into motifs of the dinner table and painter’s palette.

The White Hart Inn in Salisbury, Connecticut has an amazing collection of modern artwork including pieces from prominent artists like Jasper Johns, Terry Winters, and Frank Stella, who are all local to the area. Johns’ 1981 screenprint Usuyuki hangs above the cozy hearth at the design-focused Appalachian hotel run by magazine editor Meredith Rollins and her husband Conley.

Untitled at the Whitney Museum of American Art features work by American artist Robert Indiana above the bar. The 1964/2007 work features the illuminated word “EAT” in bold, white block letters on a circular black backdrop.

When West Village stalwart Mas Farmhouse, run by Chef Galen Zamarra and his wife Katie, was ravaged by a fire, it was a miracle that the restaurant’s artworks by Al Hansen, Scott Kilgour, and illustrator Donald Robertson (AKA @drawbertson) were not destroyed. The boite is set to reopen in March and it’s the perfect opportunity to check out the restaurant’s custom Robertson piece made for Chef Zamarra for the restaurant’s 10th anniversary—their art collection inspires creativity for his dishes.

The Vine, a new all-day eatery in Midtown NYC, hired art world and design darling Kyle DeWoody to curate its collection. One special work on view is Samantha by Alex Katz (1987).