fall in love with prague’s fairytale architecture (we did) 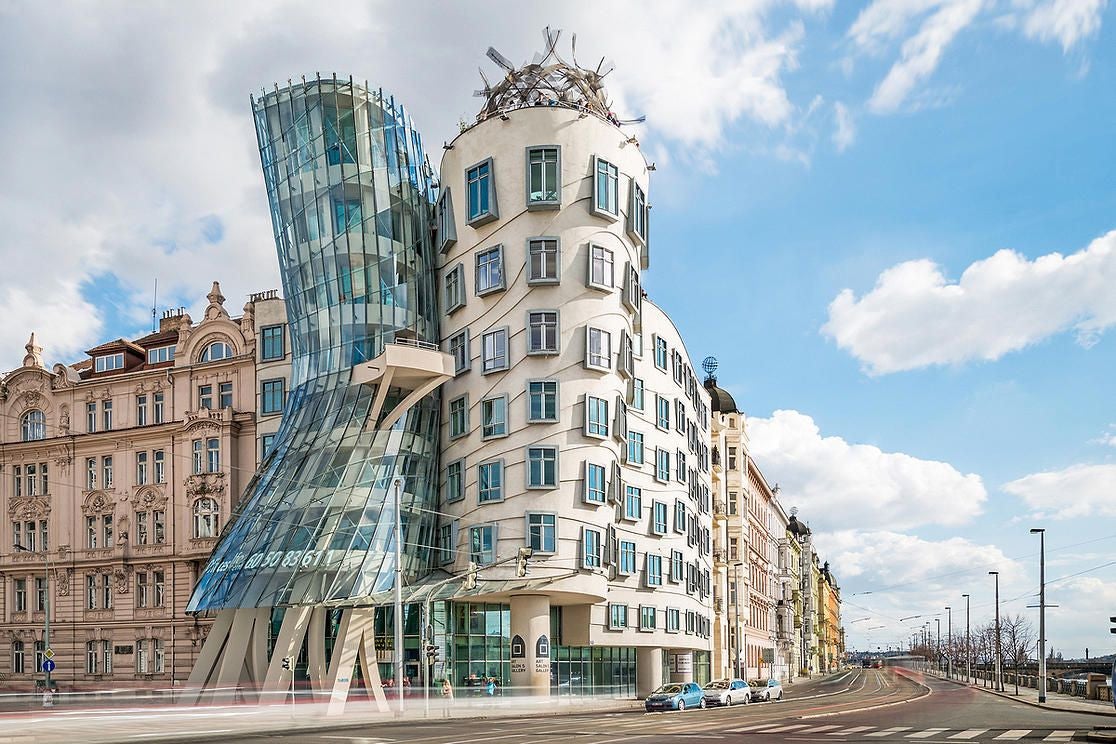 Prague: The capital of the Czech Republic and home to dozens of distinct architectural styles. With over 1,000 years of history, and largely unscathed during WWII, Prague plays host to a number of architectural styles — each of which transports your mind to a far away place.

While Prague does boast several stunning Romanesque buildings — which are far older than gothic structures — the gothic architecture in the capital is more well known, and arguably a lot prettier. Being so close to these ancient structures makes you feel as though you’re living in medieval times.

Renaissance buildings are a dime a dozen on the streets of prague. Look for the characteristic marked sgraffito — decorative, often geometric designs etched into the building’s exterior walls. This style was brought to the city by the Hapsburg family (read: rulers of the Holy Roman Empire) when they temporarily moved the HRE’s capital from Vienna to Prague.

Famous Renaissance structures in Prague include Schwarzenberg Palace and The House at Minute (pictured).

Characterized by extravagant designs and dramatic facades, the ornate Baroque architecture style was incredibly popular in Prague during the 19th Century. Waves of fluid lines, golden ornamentation, and voluptuous curves dotted the town, bringing color to the otherwise stark capital. It is this style that gives Prague its fairytale-like look.

Nearly all the buildings on Prague’s Old Town Square are in the Baroque style. This includes the Goltz-Kinský Palace and St. Nicholas’ Cathedral.

Architecture during this time attempted to create an equilibrium between society and nature. The use of natural curved lines and motifs of flora and fauna marked Art Nouveau with a gentility unlike any previous architectural styles. And yet, despite its gentle nature, Art Nouveau styles in Prague were marked with intricate designs and opulent decorations — perfect for pretending you’re royalty while touring the buildings.

One of the most popular Art Nouveau buildings in Prague is the Municipal House (pictured). Another famous site in this style is Hotel Central.

A few years after the rise of Art Nouveau buildings in Prague came the cubist movement, with a focus on sharp angles and geometric designs. Aside from Paris, Prague is considered to be one of the only European countries to embrace this architectural style. Although rare, cubist architecture feels like you’re walking through a fantasyland filled with out of the ordinary structures.

The most famous cubist building in Prague is The House of the Black Madonna (pictured). Other popular cubist creations include houses in the neighborhood of Vyšehrad.

Postmodern architecture is taken to a whole new level in the Czech capital. The most popular deconstructivist building is Dancing House (pictured), which closely resembles two partners dancing together. The unusual building stands out among the gothic and baroque buildings that surround it — but that’s okay, because it makes us feel like we’re in a futuristic kingdom, complete with stunning architectural designs.