A symbol of Black liberation and joy. 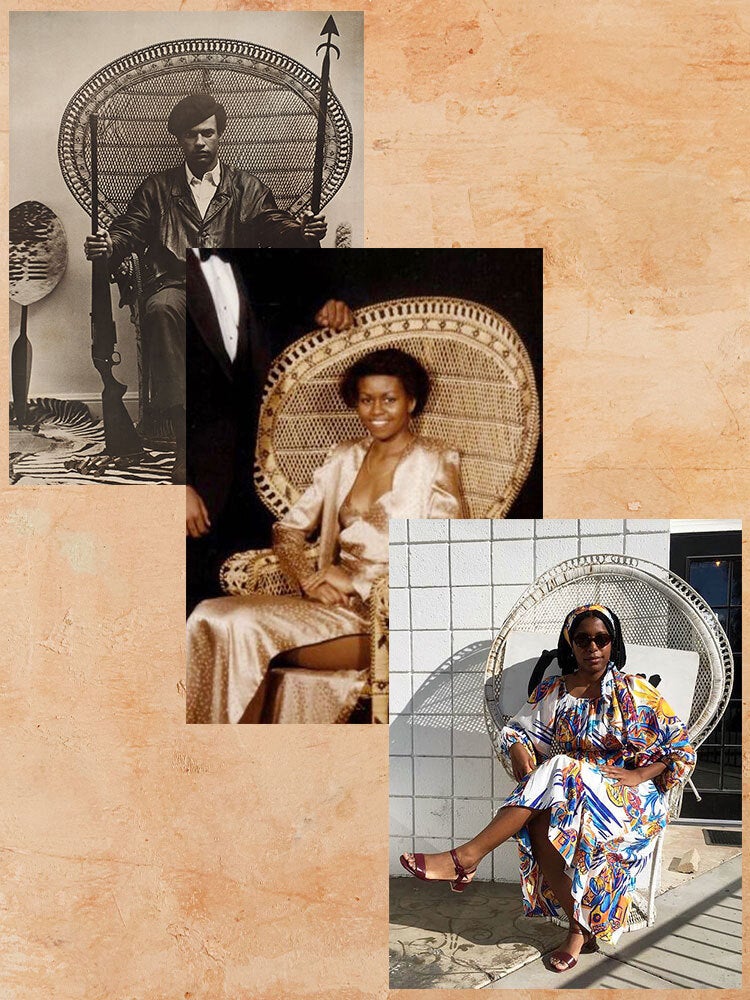 In the weeks leading up to my wedding day, I spent an inordinate amount of time thinking about peacock chairs. Months earlier, my fiancé and I had wandered through a rental showroom high above midtown Manhattan with our planner, picking out furniture, linens, utensils, and dishware, but I continued to dwell on woven thrones with ballooning back panels—like the one my parents once kept in the basement for birthdays and First Communion parties. At some point, ours slipped away, but I continued to associate them with family celebrations and wanted to incorporate one into the reception.

Flipping through old photos, I now realize that my affinity for peacock chairs didn’t resurface all that suddenly. For years I unwittingly made a habit of sitting in every one I could find, making my companion snap a photo of me: in front of a vintage store in Palm Desert; tucked away in a quiet corner of Adventureland at Disney World’s Magic Kingdom; at the Brooklyn Museum just beyond the entrance to the “Soul of a Nation: Art in the Age of Black Power” exhibition. In each photo, my posture is more erect than usual, a slight smile threatening to break into a full grin at any moment as I try and fail to channel Donna Summer, Al Green, and Huey Newton.

In light of my own reference points, I long assumed that peacock chairs were inherently connected to Blackness. I imagined them looking at home in the Caribbean—perhaps that was how they had made their way into Latinx communities and countless quinceañera celebrations in the States. Then again, rattan, commonly used to construct peacock chairs, tends to come from the countries within the Southeast Asian archipelago. The more I tried to pin it down to one part of the world, the more places it appeared to belong to.

Although people around the globe have been weaving plant fibers into functional furniture for centuries, wicker furniture—a catchall phrase that refers to the weaving process, regardless of the material used—surged in popularity in the Western world at the turn of the 20th century. Willow wicker pieces, typically originating in Europe, came with a certain old-world charm. Meanwhile, woven rattan items were thought to have been imported from Indonesia and the Philippines.

Stateside manufacturers began importing rattan in order to create their own catalogs in a variety of styles. While willow wicker designs were often named after East Coast resort towns, Asian-inspired designs were sold with names plucked from all over the map: Porto Rico [sic], Panama, and so on. Still, Americans clamored for authentic rattan pieces crafted abroad. In 1913 a well-traveled Californian named Mrs. Fred W. Wood wrote an article in a local paper about one well-known spot for acquiring woven furniture: Manila’s Bilibid Prison. As she described the experience of shopping for pieces created by prisoners, she assured her readers that “things made there are not obtainable anywhere else in the world.”

Among these unique pieces was the peacock chair, which even then seemed to evade attempts to peg it geographically. “Many people think it is East Indian,” Wood explained. California’s Pacific proximity meant West Coast shoppers had steady access to a variety of Asian import stores, and so peacock chairs became a go-to for Hollywood publicity photos, beginning in the silent-film era and extending well into mid-century even as wicker furniture fell out of favor.

Years later, as the originators of San Francisco’s counterculture scene began sifting through vintage clothing and bringing a sense of Edwardian romance to their wardrobe in the ‘60s, so too did throwback wicker pieces make their way into the Haight’s cheap Victorian crash pads. In fact, it was in San Francisco, just a few blocks south of the Haight-Ashbury district, where Huey Newton posed for a photograph that would permanently link the peacock chair to the notion of Black liberation.

Eldridge Cleaver art directed the shot—a zebra-print rug beneath the chair and Nguni shields propped up along the back wall, with Newton holding a spear in one hand and a rifle in the other. “We knew it was necessary for us to try and get a centralized symbol of leadership,” Black Panther Party cofounder Bobby Seale wrote. “So we decided on a picture of Huey.”

Looking at its migration through history, it’s not lost on me that the peacock chair—produced by people of color and brought to the U.S. as a representation of wealthy Westerners’ exotic flights of fantasy—found new life once it was reclaimed as a symbol of a marginalized community. The chairs became so aligned with the struggle that they were brought to Black Panther rallies and placed onstage to represent Newton even when he couldn’t attend.

Appearances of the chair proliferated in magazines and on album covers in the years afterward, some referencing Old Hollywood leisure, others channeling defiant Black pride. When Beyoncé brought one onstage during tour performances of her magnum opus and ode to Black women, Lemonade, the reference was clear. The promotional poster for 2018’s Black Panther featured the late Chadwick Boseman on a sleek vibranium throne that felt futuristic yet rooted in history—the pose and the seat’s distinct shape were all pure Newton. Still, somewhere along the way, the chair also came to represent Black joy, particularly during the rites of passage—weddings, birthdays, baby showers—that can make ordinary people feel like royalty for a day. In the lead-up to my wedding, I felt the urge to recapture that feeling for myself, too.

My own childhood memories of the chair are happy, if not a bit hazier with each passing year, but in conversations with friends, I’ve learned that it’s a piece of furniture with a firm foothold in our collective histories. Our mothers bought them in the ’70s, ’80s, and ’90s or rented them for banquet hall events. Before she was Michelle Obama, a teenage Michelle Robinson took her prom photos in a peacock chair, dressed head to toe in pink satin. Now old enough to decorate our own homes as we see fit, a number of my friends and I are constantly on the lookout for affordable vintage ones.

As prominent as the chair remains in Black culture, my assumption that the peacock chair itself was created by Black people turned out to be incorrect. It’s a symbol that was chosen and embraced by the community for its ability to confer regality onto anyone in close proximity to it. Claiming the right to see one’s self as such in spite of a society that says the opposite feels as urgent and necessary today as ever, whether we choose to immortalize the moment with a cool gaze or a warm smile.

In the end, with so many other imminent wedding to-dos piling up, we stuck with the chairs we’d already rented for the reception. Months later, though, when we commissioned a piece of artwork to commemorate our wedding day, I asked to be depicted in my favorite chair. I sent a photo of Donna Summer along with the requisite photos of ourselves for reference.