And a chic stock tank pool. 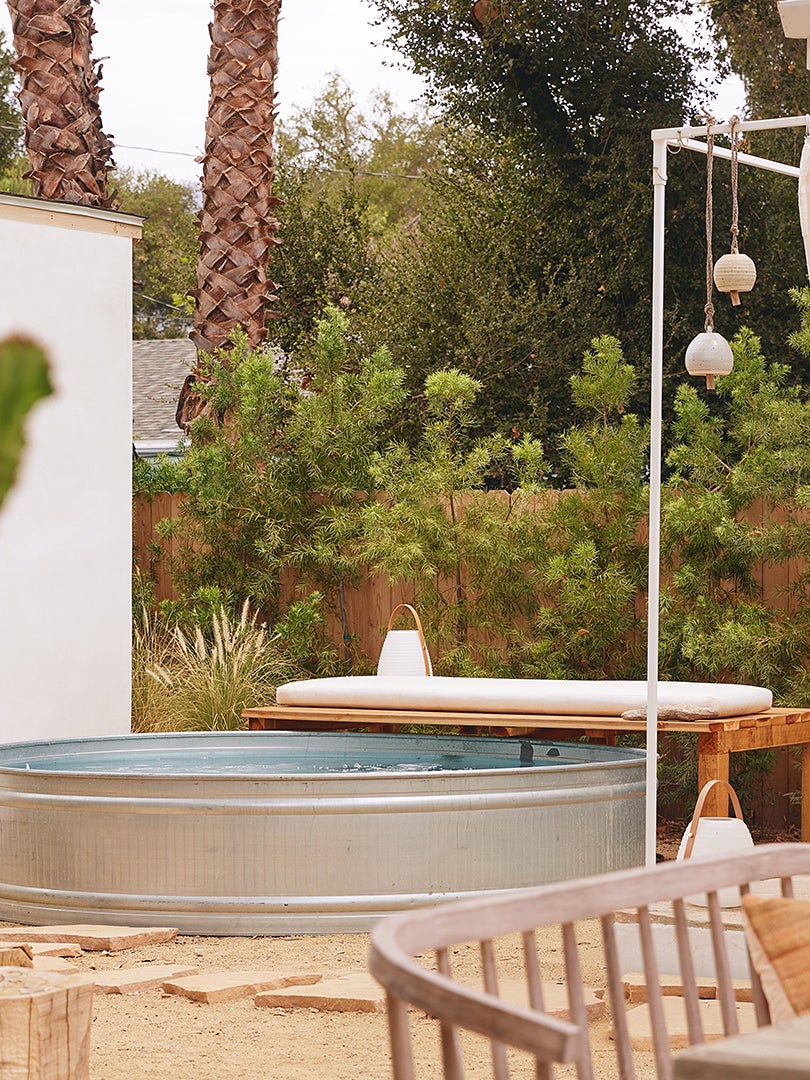 When it came to practically rebuilding her Ojai, California, home from the studs up, Thayer Gowdy wasn’t looking for perfection—especially when she began renovating the backyard. “I didn’t want it to look all brand-new,” she explains. “I didn’t want it to be too precious.” Drawing on the rustic minimalism she had witnessed in Portugal (she loved the laid-back vibe in Olhão so much she almost bought a farmhouse there), the photographer set out to make her yard look as though it had been there for 1,000 years. A handmade touch was crucial to it all, and luckily she’s not afraid to pick up a wheelbarrow or rent a tractor.

Step one was to set herself up for success: Gowdy scrapped what little dried-up grass there was out back along with a dingy greenhouse, opting for a desert-approved setting, before evening out the ground. Grading the surface was essential because on the few days it does rain in Ojai, you don’t want the water pouring into your foundation. “Water down here doesn’t absorb into the ground because it’s so hard. This was all new to me because I had never lived in Southern California before this,” she says. But Gowdy did learn an important lesson from her last two houses in the northern part of the state: Lay down chicken wire and weed cloth underneath decomposed granite. “If you don’t, you’ll get gophers,” she warns.

A happy accident occurred while Gowdy and her crew were laying the flagstone for the front walkway. “We didn’t seal the top of it, so it took on this deep, almost peach color. Then we ended up putting a cement glaze from the mortar across the top of it,” she recalls. “I fell in love with it.” So Gowdy aimed to replicate it out on the back patio, but trying to communicate to other people to embrace imperfection is tricky. “It’s hard to tell people to be messy, to be a bit more crafty,” she explains. “A backyard is exposed to all kinds of weather. You just have to let it go.”

Turn Your Fencing Into Art

After receiving an estimate of $25,000 to replace the old chain-link fence with a simple dog-eared one, Gowdy called on a friend from New York who happened to be visiting anyway to help her DIY a stuccoed solution. “I said, let’s go online and learn how to build a fence,” she says, laughing.

Gowdy tasked another pal, multidisciplinary artist Charlie Callahan, with adding a slanted wood detailing to the front section. Before Callahan closed up the two-sided structure, Gowdy snuck a small secret token inside of the framing.

Pare Down Your Plants

Putting the minimal in rustic minimalism, Gowdy narrowed down her landscaping primarily to cacti (extra-tall varieties that look like mini sculptures line the front gate) and Japanese yew, which forms a hedge in the backyard. “I’m not an experienced landscaper by any means, but being a photographer, what I do care about is the density of the leaves and if light comes through them,” she explains. The leaves on the yew are fluffy and soft. “When you brush past them, they feel good,” she adds.

Bring the (Dinner) Party Outside

Gowdy designated the front yard for morning activities. Here, her citrus trees and raised garden thrive in the bright morning light. But in the afternoon, she and her dogs switch to escape to the shade in the backyard provided by a large California sycamore. The tree also happens to be a favorite perch among the local golden hawks. “They love it because it’s the highest in the neighborhood,” she notes.

Gowdy focused on creating small vignettes throughout the large space that guests can interact with. In one corner she carved out a built-in bench that basically acts as a second living room. Situating a dining table in the center of everything was a no-brainer. “In Southern California, you eat outside all the time,” she explains. It also gave her some square footage back inside so she could build her dream pantry in lieu of a proper formal dining area.

Match the Shed to Your House

In place of an in-ground pool: a stock tank (well, in the 105-degree weather, it feels more like a hot tub). Not digging a giant hole in the ground freed up room in her budget to construct a storage unit–slash–photo studio. Gowdy purchased the structure from Tuff Shed and had the whole thing swathed in stucco so it matches the Mediterranean vibe happening on the main facade.

Any occasional rainfall can be captured and reused thanks to the clever water catchment tanks Gowdy splurged on. “You have to be smart about climate change nowadays,” says Gowdy. “It’s like mini, mini, mini permaculture.” That’s one way to beat the heat.