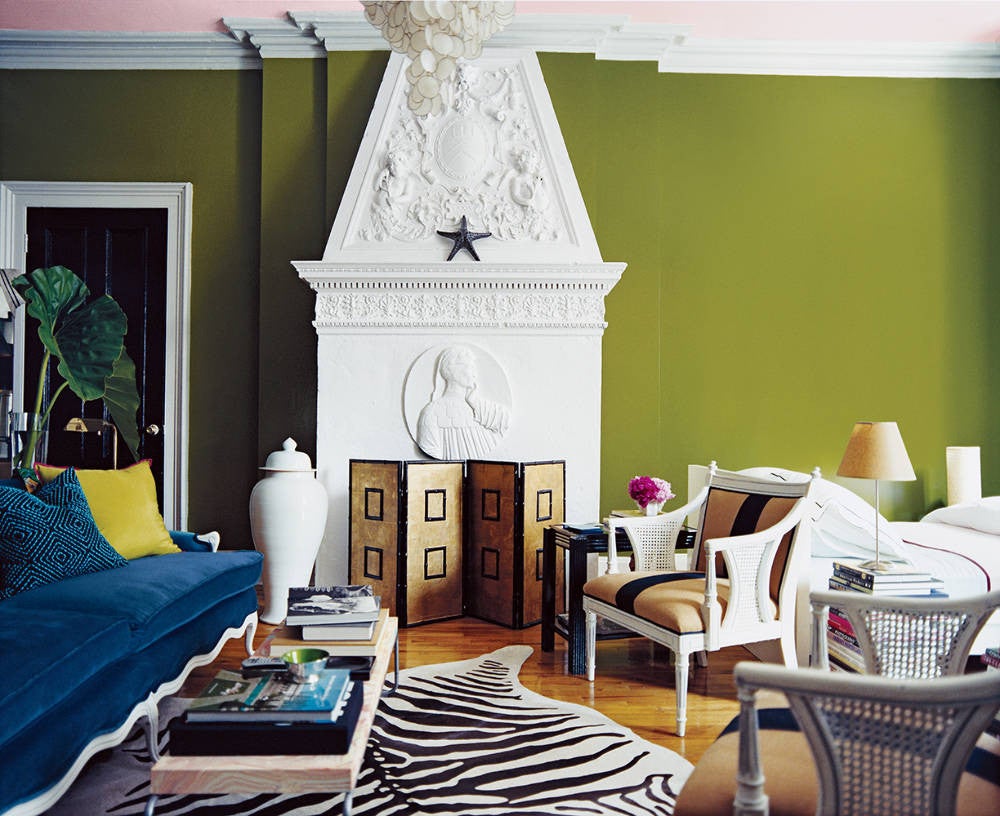 New Yorkers are, by tradition, exceedingly cunning with space. Consider one of the city’s first skyscrapers, the Flatiron Building, with its ever-thinning triangle facade eking maximum real estate from the crossroads of Broadway and Fifth Avenue. Across the street, four flights above a deli, is another spectacle in ingenuity: the to-the-nines studio of Nick Olsen, 24-year-old assistant to interior decorator Miles Redd. The apprentice clearly owes some of his theatrical color palette and dramatic gestures to his mentor—but he’s on his own trip. “Miles’ taste is impeccable, and I get a lot of inspiration from him, but this place really follows my sense of humor,” Olsen says.

While his job affords him ample entrée to paint, fabrics and furnishings, most of his decor comes from antiques markets here and in his hometown of Pensacola, FL, not to mention the art-supply store. Indeed, almost everything in the apartment—from window blinds to refrigerator—has gone through Olsen’s whimsy mill. “I want to do it myself and do it cheaply,” he says.

SWEEPINGGESTURES “The apartment was dim and dull white,” Olsen says. “I painted almost everything, even though it’s a rental.” Eye-popping hues, plus mismatched furniture styles, could create a horror show in most petite quarters, but Olsen understands the trick of playing shapes and textures off each other. “It’s a scale issue. When you have 12′ ceilings, the objects have to be substantial.” The apartment was blessed with the monumental hearth, which Olsen topped with a little starfish, painted high-gloss black to emphasize the contrast. The white fireplace is a breathing point amid the dense oregano green he selected for the walls, while a pale-pink ceiling lends a soft glow. Where paint wasn’t appropriate, Olsen trotted out other alteration tactics. The Regency-style chairs were reupholstered in linen burlap, and each was festooned with a sewn-in fabric remnant put to smart use down the middle. The stripes resonate with the faux-zebra rug, the painted blinds and Olsen’s black paint outlines on the fireplace screen.

BALANCING ACT “There was so much happening on the other side of the room—with that huge fireplace—that this side needed something grand,” Olsen says. His solution: a white-and-blue cotton tent over a small side table that marries flair and function (he works and eats here). Olsen decorated the edges with black ribbon affixed with a glue gun; the Greek key pattern lends a little majesty. Further embellishment comes from a Chinese lantern that he covered in grass cloth and an Asian oil pastel from a Pensacola junk store. The table, too, was tweaked with a burlap skirt, while Target bamboo folding chairs were given a coat of black paint and chic cushions in pedigreed fabric. Of his faux Franz Kline, Olsen says, “This is another Miles trick. If I can’t get the real thing, I fake it.”

The vintage 1950s French sofa, reupholstered in candy-blue velvet, is the anchor of the apartment’s social area.

SURFACE VALUE “I don’t leave anything alone,” Olsen says. From him, that’s an understatement. In his turquoise kitchen, he faced an aggravation most renters resign themselves to: the generic white refrigerator. Not Olsen, who covered his with a spring-floral wallpaper. “Who wouldn’t rather look at flowers than bare plastic?” he asks.

Likewise, a simple CB2 Parsons table is given an elegant new coat—grass cloth applied with construction adhesive. Underneath it sit mini bamboo stools, unearthed at a flea market and made over with expensive peacock-patterned taffeta. In between the decorator’s beds are beige Pier One mats painted a black-and-white chevron pattern in latex floor paint.

Olsen puts piles of coffee-table books to work in his favor, using them as nightstands and as object pedestals.