Here are her tips for success. 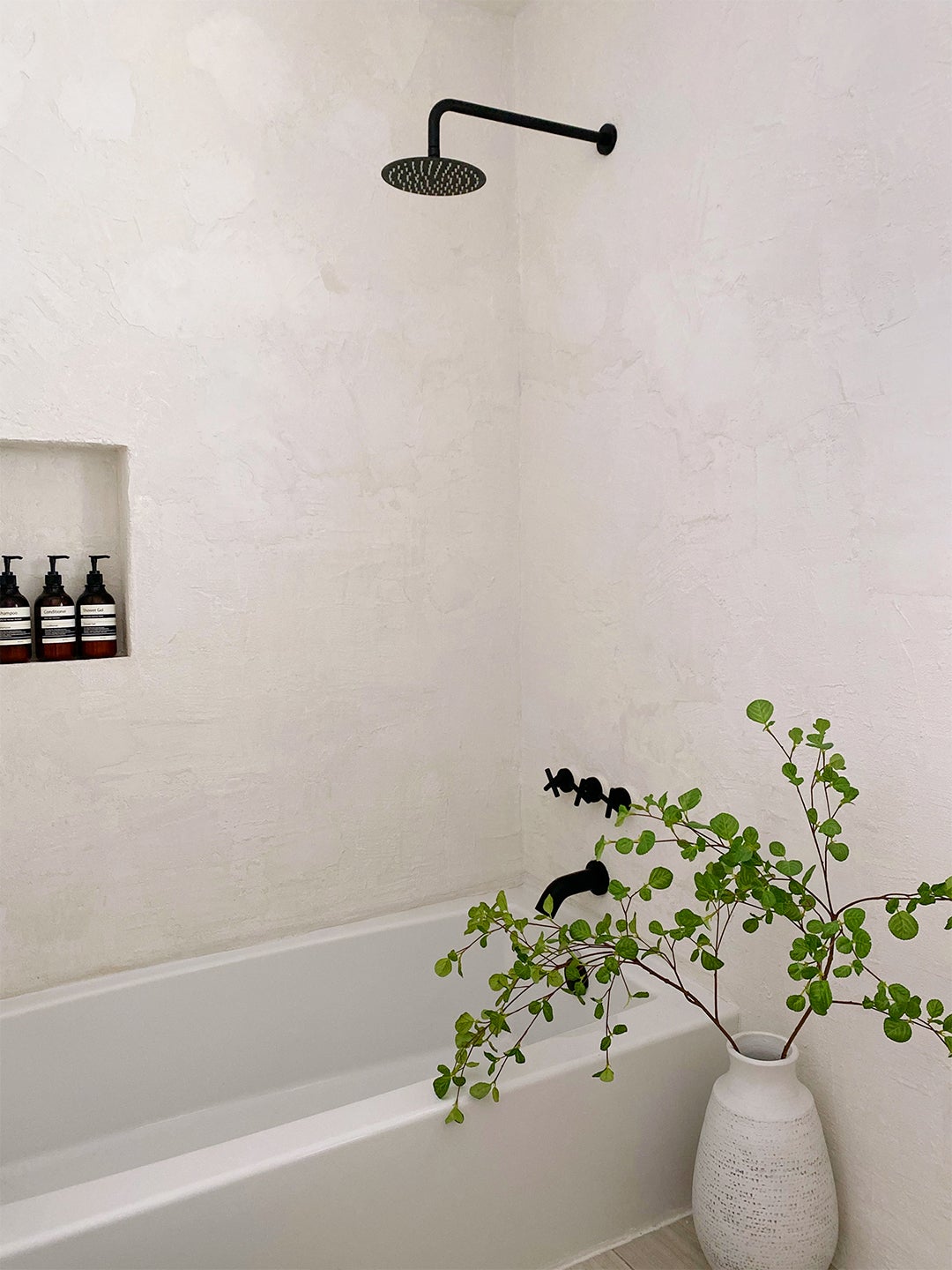 At the end of 2020, while pregnant with her second child, Farah Prochaska was sitting at home binge-watching Home Again With the Fords (the HGTV series following Leanne Ford and her brother, Steve, as they help people move back to where they grew up) when she had an aha moment. “Leanne used Surecrete on so many of the projects, and every time I was like, I have to do this,” recalls Prochaska, a Utah-based design blogger and freelance stylist.

The textured wall treatment has become a signature of Ford’s. The designer first introduced us to the idea when she swathed her dated Los Angeles bathroom in the concrete coating (she applied it right on top of the old wall tile!). She has also been known to use it in husband Erik Allen Ford’s Buck Mason stores, one of which Prochaska visited while on a trip to L.A. “When I saw it in real life, I knew I could do it,” she says. As soon as she got back home, she followed through and transformed her kids’ builder-grade bathroom into a zen retreat (check out her full how-to here). Ahead, she shares what she learned from putting the pro’s famous method to the test.

Do: Start With a Streamlined Slate

When Prochaska and her family moved into their home six years ago, she could tell it was newly renovated—and not in a good way but in the everything was from Home Depot way. She wanted to pare the whole space back, so she replaced the old all-in-one tub-shower with a new alcove bath. The rest of the walls were framed with waterproofing membrane, installed by a professional. She even removed the trim work around the window to keep the wall surfaces looking as sleek as possible.

Cover everything, notes Prochaska: the entire floor, switch plates, faucets, toilets. Of course, you can’t forget yourself. “I don’t even know how it happens, but your clothes get ruined,” she says. Create a drop station outside the door where you can take off your socks or coveralls on a plastic tarp so you don’t end up dragging debris through the rest of your house, creating another project for yourself.

When Prochaska watched Ford and her team use Surecrete on the show, she saw them apply it directly onto the desired surface. But that, she quickly learned, was because they were usually covering something that was a similar gray or whitish hue. “From what I saw from TV, they would just smear it on and do one even coat,” she remembers. Prochaska tried to do the same, but partway through covering the shower, she realized that the bright red, waxy waterproof board was still peeking through. In an effort to hide it, she found herself applying way too much Surecrete and it all ended up looking like a mess. “I had done about 60 percent of the room and had to start over,” she says.

Accepting the loss, she sanded the walls down and chipped away at her first coating with a chisel. Once she had a clean canvas again, she went over the walls with an all-purpose primer (two coats), which gave her a neutral, smooth canvas. “It was night and day,” she says.

Don’t: Start in the Center

Begin by applying the Surecrete around the top 8 inches of the room, closest to the ceiling, in a fanlike motion. Because you have to do some “crazy sideways maneuvers” in an effort to not get any Surecrete on your ceiling, you’ll end up with some drips and blobs further down on the wall, so it’s better to work your way down for the first bit. After that area is done, smooth out the drippings that have fallen and do a few random 1-by-1-foot swatches around the room. “This is the whitest your cement is going to be, so spread it around quickly before it dries,” notes Prochaska.

Do: Add Water as You Go

The mix is essentially half Surecrete, half colored powder, and one quart of water. Once that’s all in the bucket, use your mixing paddle to stir everything until you get a pancake batter–like consistency, but keep the drill and mixer with you. When you notice that the material is getting too clumpy or sticking to itself, you’ll want to add a little bit of water and stir for a few minutes. Note: Every time you add water, it will slightly darken the mixture, which is why it’s key to do some random swipes throughout the room so the variation in tones looks natural.

Don’t: Stress About Cleaning It

It’s not Play-Doh, Prochaska assures: Surecrete is waterproof. The DIYer simply cleans her kids’ shower with a kitchen dish brush and clear dish soap and scrubs away. Just steer clear of clothes that will catch on the dried, textured surface.

Do: Commit to the Aesthetic

The whole idea of Ford’s Surecrete trick is to give a space a spa-worthy, handmade touch, so don’t stop at the shower if there’s still a little more room in your budget. To complete her bathroom, Prochaska replaced the old vanity cabinet with a floating one from IKEA, which her contractor mounted in the wall to support the new concrete sink (it weighs about 25 pounds) and the marble countertop. The asymmetrical mirror was a steal at $130.

In a full circle moment, Ford reached out to Prochaska via Instagram and asked where she got her matte black faucet (a genius Amazon find). “I wish I could have given her the link, but it sold out,” says Prochaska. The student has become the master.