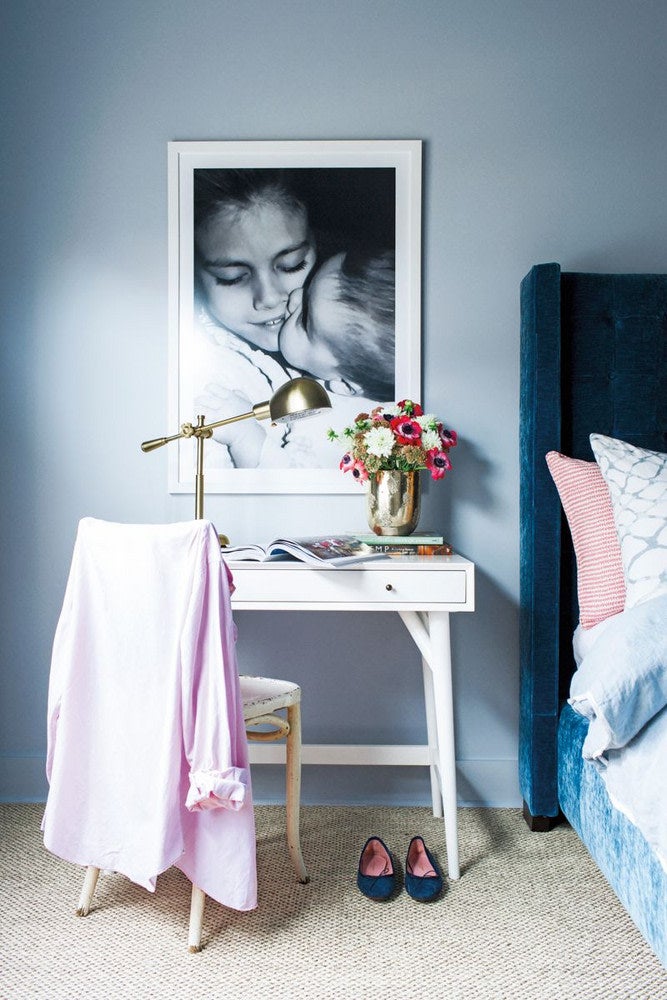 “I fancied brighter colors and some femininity,” says Cohan. “I work long, dirty hours and craved a space that would be an oasis on my days off.” COFFEE TABLE carved wood by West Elm  NIGHTSTAND Mid-Century $299 westelm.com

A pair of Sally King Benedict paintings, commissioned by Cohan, add a sense of whimsy to the entryway. “I love the cheekiness of the faces that she paints,” she says. ART “Faces” painting, sallybenedict.com  CONSOLE TABLE box frame by West Elm

help wanted “I have a lot of different influences in my life—I am not completely American nor completely English,” says The Walking Dead star Lauren Cohan, who spent her early childhood outside Philadelphia before moving to the U.K. as a teenager. “I wanted my home to reflect that.” So after living part time in Atlanta, Georgia, for the past six years filming the show, Cohan wanted her new apartment to express her personality. To help decorate, the actress enlisted Brian Patrick Flynn, the interior and production designer for HGTV Dream Home, to brighten up the space’s original neutral brown and beige palette, which was a bit too masculine for her taste. “Lauren wanted it to be casual, colorful, collected, and comfortable,” says Flynn. “She has tons of unique interests and a flair for collecting things that have true sentimental meaning.”

The only renovation aspect of the project was removing the upper cabinets in the kitchen. “It makes the space feel more open and personal, allowing the floral wallpaper to take center stage,” says Flynn. WALLPAPER Wisteria in sky, clarke-clarke.com  BAR STOOLSIngolf $59 each, ikea.com

Tone on tone is the way to go for anyone wanting to introduce color.

I usually bring four to six shades of a color into a space through paint, wall coverings, upholstery, rugs, accessories, and art to layer it perfectly.

Almost every argument between couples can be settled with the use of blue-gray.

It’s gender neutral, bright, and calming, and it works with a wide array of accent colors.

to keep them in check.

This desk doubles as a nightstand. Cohan’s most treasured item in her apartment is the black-andwhite photo of her and her sister, Alia, from their childhood. BED Slocom platform, mgbwhome.com DESK Mid-Century mini in white by West Elm TABLE LAMPRL ’67 Boom Arm $1,050 ralphlaurenhome.com

cohesive vision Starting with midcentury pieces that Cohan already owned, Flynn found that the project was more of an editing game than a complex design process. “From the get-go, she really just needed help refining and ruling out existing ideas that wouldn’t work well,” says Flynn. “And then, slowly, I brought new ideas to the table.” Before Cohan embarked on an 18-day African safari this summer, she and Flynn went on a rapid shopping spree, tackling days of retail decisions in six hours, picking out colors, upholstery fabrics, wall coverings, and lighting. In addition, Cohan trusted Flynn with finding the smaller elements to pull the larger ones together, such as the wall-to-wall sisal and sea grass rugs in both bedrooms. As a result, the entire job— including the installation of Carrara marble countertops, wallpaper, and new plumbing fixtures—was completed in an astounding 16 days. “The logistics of getting it all done with zero displacement or project-based inconvenience made the entire thing a success,” says Flynn. Now Cohan, a once self-proclaimed gypsy, with a hard time sitting still, describes her home as “soothing, personal, and playful.” “It really is a space that I love,” she says, “and a place where I remember to stop fussing and just relax.”