When every inch counts. 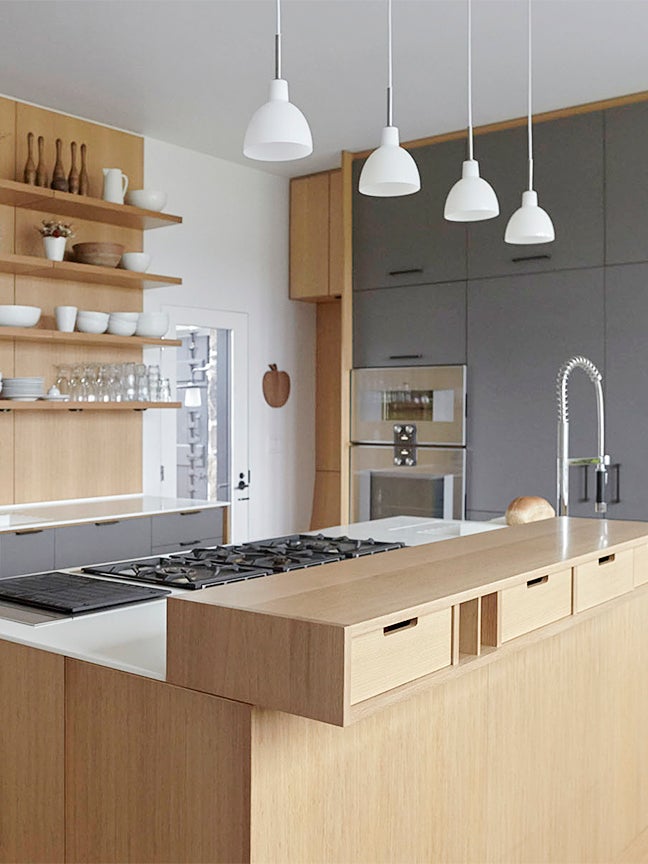 You can have the largest, most high-tech kitchen in the world, but there’s always going to be a slither of space you don’t know what to do with, like a teeny gap in between the wall and the oven or a whole bunch of nothing above the upper cabinets. Design brand Henrybuilt came up with a clever solution that turns these types of awkward nooks into functional storage, and it’s called the Bar Block.

The company first released its horizontal version back in 2010. The part bar, part organizer is meant to act as an extension of an island or a peninsula. Then came the vertical iteration, which measures just six inches wide so it can squeeze into tight gaps. Both orientations are essentially catchall spots for the tools you’d normally leave out on the counter (think: spices, knives, wine bottles, mugs). Unsurprisingly, the component is one of the company’s best-sellers (it has installed close to 1,500 of them to date).

While you can’t purchase the structure on its own, as it’s meant to be integrated into one of the company’s kitchen configurations or as a part of its Gibraltar island, the product is a reminder that cabinetry isn’t the only way. Some of the most common kitchen storage problems can be solved by thinking outside the box. Here are some of our favorite uses.

When Cabinet Dimensions Don’t Quite Match Up

This tall and narrow niche fits perfectly in between two large cabinets or alongside an integrated appliance. It features three cutting boards, which are housed in a perfectly sized cubby, as well as removable boxes that can hold long items such as spatulas. The shelves can be adjusted to accommodate the height of other objects like mugs and baking pans—best stored on the bottom. There’s also a groove that keeps a wine bottle centered in the space.

Run out of drawers? The horizontal structure is a lifesaver in this case. Knives and napkins can be stored in the interchangeable openings of the block. The overhang creates a partial bar extension that allows for sitting or standing on the nonworking side of the island.

When You Want to Disguise Cords

The kitchen is one of the most convenient places to charge your devices, but all those wires can get in the way of cooking (not to mention, they’re ugly to look at). Typically, building codes require that an outlet go on the end panel of an island, but the Bar Block eliminates the need for that by conveniently incorporating the plugs in the wood compartment.