These Healthy Crackers Do Double Duty as a Puzzle

Playing with food is officially approved. 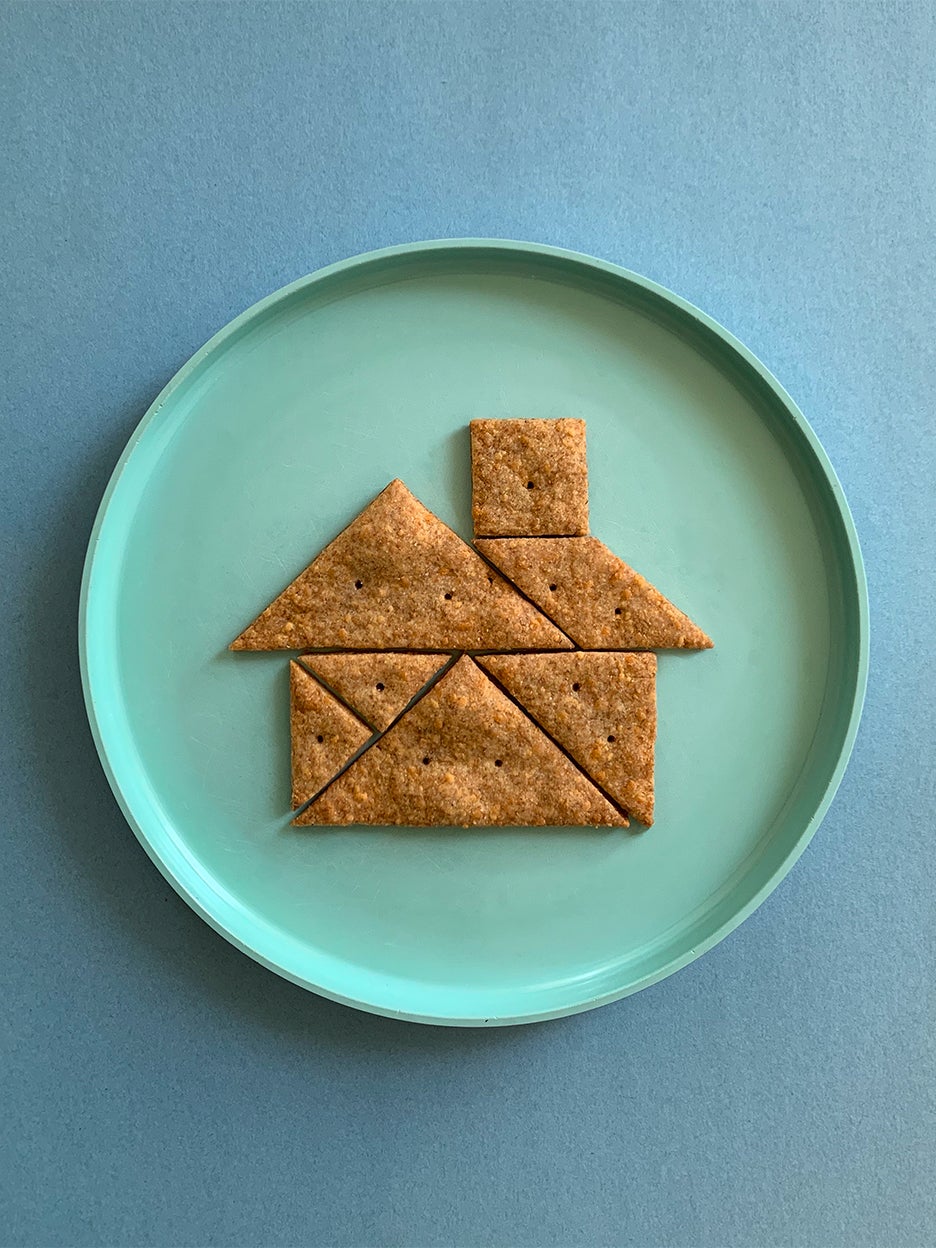 Everyone has developed a puzzle habit in quarantine, kids included. So when graphic designer Erin Jang was pondering activities to keep her littles (Miles, 9, and Noah, 4) busy while being cooped up this year, she combined two of their main interests: snacking and puzzling. The result—tangram crackers.

For the uninitiated, tangrams are centuries-old Chinese puzzles traditionally formed by seven polygon pieces of varying sizes that fit together to form a square. “Being a graphic designer, I like thinking about abstract shapes, so I’ve always really liked tangrams,” says Jang, who also appreciates their straightforward simplicity. “I’m all for setting my kids up with things that will keep them occupied and being able to walk away and let them play on their own.”

Tangrams, Jang says, have the same open-ended appeal of that other perennial kid go-to, Magna Tiles, and allow for endless experimentation with shapes (see her amazing cheat sheets below). Jang’s genius idea to make an edible version is simple to execute (“My favorite kind of craft or activity is something where I don’t have to buy anything extra,” she says) and provides something to fill your kiddos’ snack craving and retain their attention…for a while at least. Here are her top tips:

The Firmer the Dough, the Better

The key for a successful tangram cracker puzzle is a recipe that results in a hearty, firm dough. “Anything that’s going to rise and puff like crazy isn’t going to work,” adds Jang. She uses a recipe from Smitten Kitchen for whole wheat crackers. “Some doughs really spread, but this one keeps its shape and all the edges.” Always chill the dough before rolling it out so it retains its form, then, Jang says, you can do your trimming on a floured cutting board or parchment paper. (For baking, use a baking sheet lined with parchment—either by transferring the same parchment you’ve been working on or lifting the cutouts from the floured surface with an offset spatula to a baking sheet covered with parchment.)

Don’t Stress Too Much About the Shapes

Jang cuts shapes freehand from 4- to 5-inch squares of the raw dough without obsessing over the final result. She’s also, admittedly, more adept at such things than most of us. For those who are overwhelmed by the idea of going rogue with their cracker cutting, you can follow a simple pattern (like this one). Jang’s pro tip: Finding the midpoint of the square to make the smaller triangles and getting straight lines (or close to straight) are important so the pieces can ultimately fit together. To wit, Jang says you can use a ruler and then make light marks with your knife before pushing all the way through the dough to make sure things are shaping up nicely.

Prompt Your Kids’ Puzzling…or Not

How your littles choose to approach their cracker tangram will depend entirely on the kid. Some children (like Jang’s youngest) prefer to look at a printed-out image of finished tangrams and follow along, while others (like Jang’s oldest) will use the pieces in a more out-of-the-box (or rather, out-of-the-square) way. “For the younger ones it’s nice to look at photos and try to find the shapes and match them,” says Jang. “While for older kids you can just give prompts. Like: Could you do all the letters of the alphabet? Can you make a car? What about a person or a boat?” Most important, adds Jang, is to make plenty of extra crackers: “We always end up eating a bunch before we even do a puzzle.”