Yes, You Can Go All Out for the Holidays in a Small Space

Here’s how one designer pulls it off year after year. 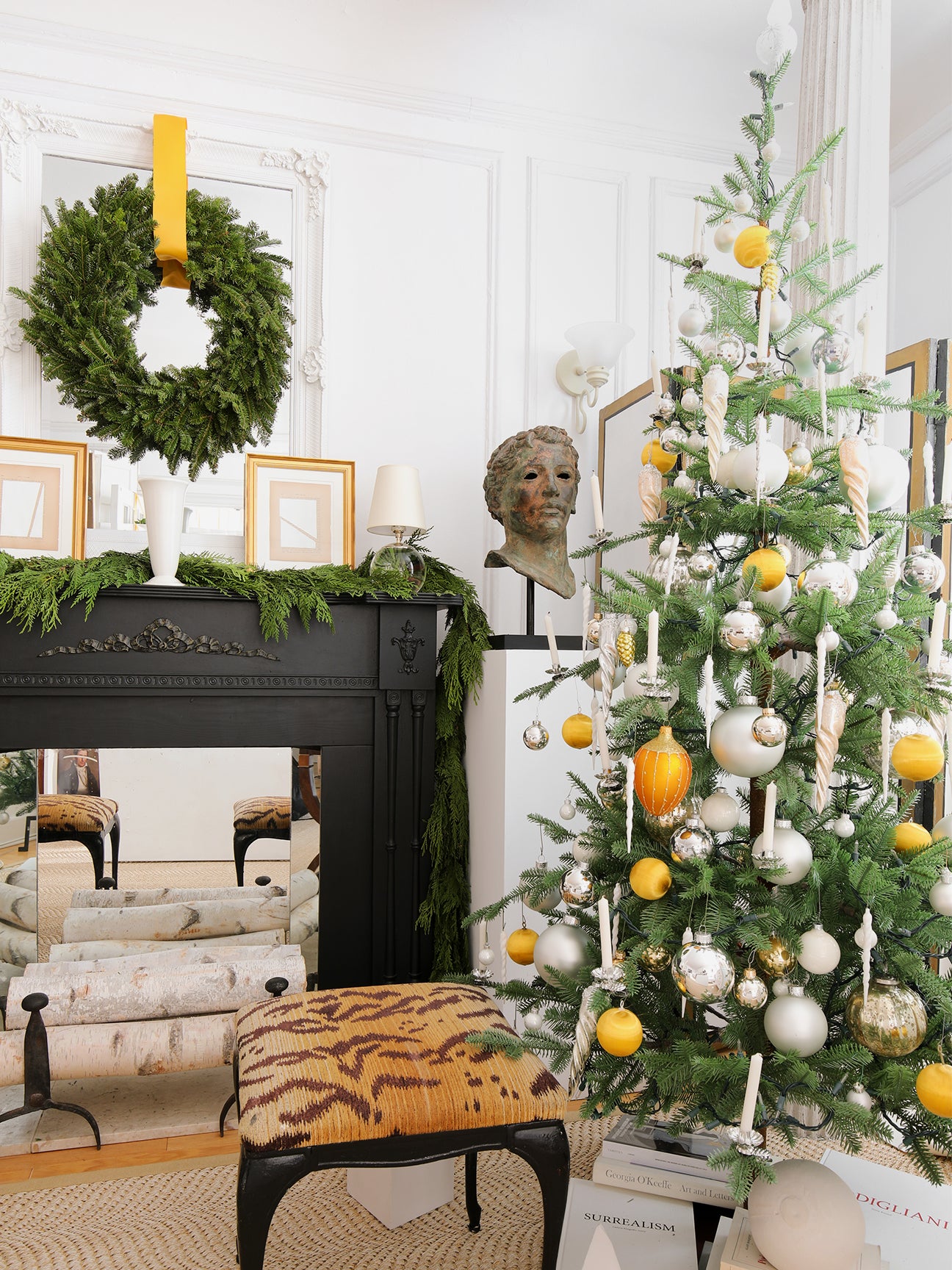 Josh Young’s Christmas tree is like a living scrapbook, decked out from top to bottom in ornaments collected over the decades. Come December it’s the focal point of the artist-designer’s living room—it’s hard for it not to be, given its vivid red trimmings and the fact that it almost grazes the ceiling. “It’s kind of a free-for-all,” says Young. “I love it because it represents so many memories and so many people.”

Young’s penchant for Christmas decor is well documented (remember last year’s getup?), and this season’s iteration is just as showstopping: He has three trees total, each featuring a different palette, all guided by nostalgia (his ornaments are a mix of hand-me-downs from his grandmother and souvenirs from trips). Fresh greenery from Williams Sonoma drapes over mirrors, mantels, and furniture. Flashes of color, like saffron-hued baubles and matching ribbons he picked up at Joanne Fabrics to tie the wreaths, add tiny pops of brightness. “I like to have Christmas everywhere I am,” says Young. Mission accomplished.

It works because he sticks to a strict philosophy: Put the focus on the trees and keep the rest simple. “As an artist, I look at my home similar to how I would a canvas. I like to create little pockets in each corner without going overboard,” he explains.

His 1,000-square-foot space, in the heart of downtown Chicago, where square footage is at a premium, is another key component of his decorating philosophy. Between hosting his annual holiday party, unwinding after work, and generally making the most of the festive time of year, Young has perfected the art of decking tiny halls. Here’s how he gets it done:

Imagine: a world where January rolls around and you don’t have to spend an entire day trying to figure out where you’re going to squeeze a whole house’s worth of faux greenery. “Not having those tchotchkes laying around and only having your ornaments to clean up is the best way to go,” says Young.

“As an artist, I look at my home similar to how I would a canvas.”
advertisement

If You Can’t Fit a Tree, Don’t Force It

Maybe you can’t spare a corner for a full-size fir; there are plenty of other ways to get in the spirit. Young’s preferred method? “I love a mantel because it grounds a room,” he says, pointing to the one in his bedroom that features a simple strand of evergreen and little else. “That garland carries on the theme of the holidays in a space where I decompress, and it doesn’t feel cluttered.” Try draping one over a painting (like Young’s Emma & Eugene—hint hint, nudge nudge) or windows—or even around candle hurricanes.

Use What You Already Have

If you naturally lean toward glittering metallic pieces, you’re halfway to a winter wonderland already. “When you pair them with some pine boughs, it will look like it’s intentionally made for the holidays,” explains Young.

Another way to redo your decor: Think beyond a piece’s intended purpose. Take the vintage dresser Young has propped in a corner of his living room. It was a score on Facebook Marketplace for under $300 and he now uses it as a bar cart, storing linens and silverware inside when it’s not being implemented as an entertaining station.

One of Young’s annual traditions is throwing a big bash to kick off the season, though this year, it’ll probably look a lot smaller and more intimate. “I’m probably the most festive of my friend group,” he says (we believe him!). “The key is keeping it simple but elevated.” Instead of a four-course dinner, he turns his dining room table into a buffet of Italian charcuterie and cheeses, keeps the wine flowing, and stocks the aforementioned bar cart with cocktail accoutrements. (His holiday drink of choice: adding two cranberries and a sprig of rosemary to a regular French 75 for some color.) With designated eating and drinking camps elsewhere, his guests are free to hang out in the living room without feeling like they might accidentally knock over a bottle of red.

When you’re decorating a smaller space, everything has to be strategic—which, in turn, makes the whole business of holiday decor a chore. Young’s antidote: Take it slow and savor the moment. “I’ll light a candle, make some hot apple cider, and put on Christmas music,” he notes. (If you’re wondering, here’s his holiday party playlist.) It’s these rituals that make trimming the tree feel like a treat rather than something you have to do. Says Young: “It’s like self-care, in a way. A little moment for yourself.”

This story was originally published in December 2019. It has since been updated.

See more holiday decor ideas: How to Make Your Apartment Festive When You Can’t Squeeze in a Tree 11 Holiday Decorating Ideas We’re Loving on Instagram Read This Before Attempting to Light Your Christmas Tree