How to Add Personality to Every Room in Your House

Expert advice from designer Jill Goldberg on how to make your space truly your own. 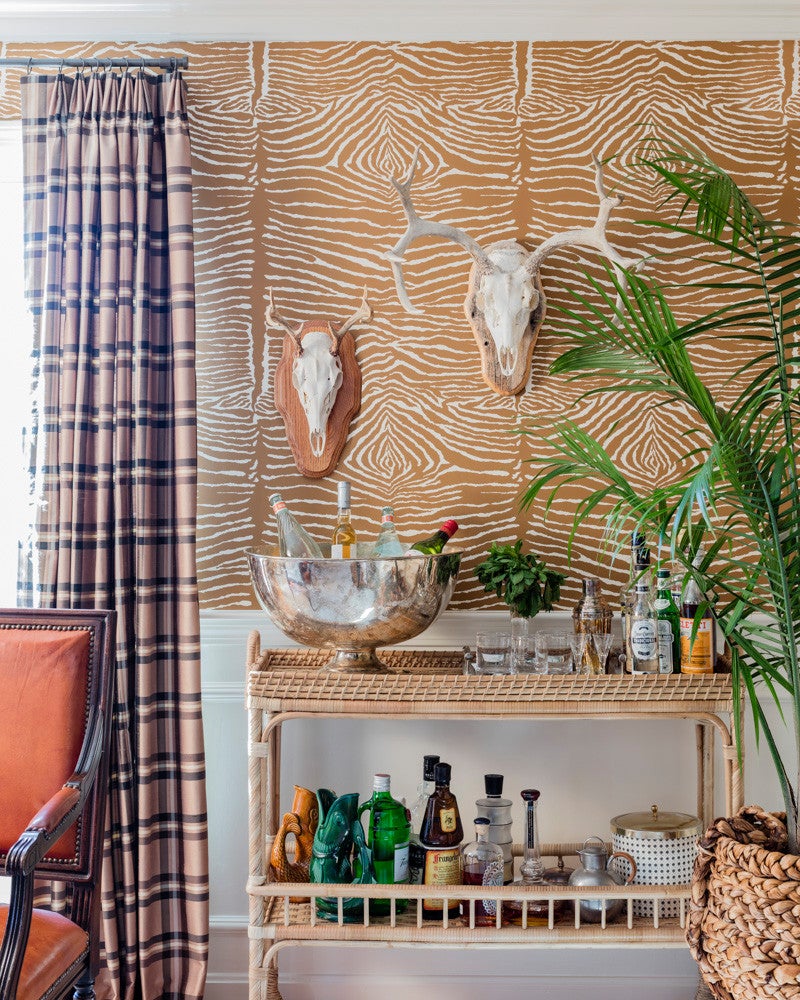 Boston interior designer Jill Goldberg believes there are no hard and fast rules when it comes to designing your home. “I tell clients to buy what they love, and it will always work out,” says Goldberg, whose widely popular home furnishing trove, Hudson, has been a mainstay in the South End for the past 10 years. “Stay true to what attracts you—no matter what style it is—and you’ll be able to string together a consistent theory,” she says.

Goldberg’s projects range in scope, style, and scale. Read on to learn about her inspired ideas, design tips, and insights.

It took Goldberg over a year to convince the homeowners of this dining room to go with the bold green drapes.  “Adding this one shot of color was my moment for the room,” says Goldberg of the budget-friendly polyester fabric that has the look of silk. “The drapes give the room a fresh young feeling.” The room’s splurge was the Oly chandelier. An RH Modern marble-topped table with a brass trestle base is modern while the antique Windsor bench has been in the homeowners’ family for several decades. “The homeowners love mid-century pieces and the woven Phillip Jeffries wall covering ties into that, along with the molded plastic Eames chairs,” says Goldberg.

Incorporate a hobby into the décor.

The husband of the couple who own this suburban home is a hunter. As a nod to that, Goldberg sought to give the dining room an urban safari feel. The chandelier is comprised of pieces from various animals “he acquired,” says Goldberg. A replica of an antique print of a wild turkey is encased in a dark frame with a suede matte that has lovely textural appeal.

For the drapes, Goldberg selected a metro plaid Kravet fabric and paired it with a lively animal print wall covering: “Le Zebre” by Brunswig and Fils. The wilton rug also depicts a small animal motif. “Pairing the different prints really gives the room a sense of playfulness, which is really charming,” says Goldberg. “It’s clear no one is taking themselves too seriously in here.” In fact, the couple’s teenage daughter actually prefers to spend time with her friends in this room instead of other areas in the house. “That shows that the family really enjoys and ‘lives’ in this room, which is the ultimate goal,” says Goldberg.

Evoke the vibe of another locale.

The owner of this home, located outside Boston, wanted it to have a calm Californian aesthetic. “She didn’t want it to feel like a typical New England home,” says Goldberg. “She was looking to have a chic, casual, and airy vibe.” Heavy silk Lee Jofa drapes were an elegant starting point for the room. The custom table and Oly chairs are upholstered in a thick fabric. The understated chandelier is Visual Comfort.

In the adjacent front entry hall, Goldberg had one of the homeowner’s chairs reupholstered in a Kelly Wearstler Lee Jofa fabric. A vintage rug depicts an oversize geometric motif, and a demilune console table is painted in a high gloss gray. “There are a lot of different textures and fabrics working together to give the feeling that you aren’t sitting in New England,” says Goldberg.

Work with what you have.

The homeowners didn’t want to gut this lovely little powder room, though it needed a significant refresh. Goldberg had the existing vanity painted a deep, glossy shade of blue and replaced the faucet and knobs with antique rubbed brass hardware. The original granite top stayed in place. A smart roman shade was found at Restoration Hardware and the walls were sheathed in a jazzy Schumacher wallcovering that makes the space feel one of a kind.

This Boston parlor level home is blessed with hand carved antique moldings and a striking ceiling medallion. “The homeowners wanted the living room to be a place where they could entertain,” says Goldberg. “They wanted it to be a bit more elegant but fun and flirty, too; a place where their kids could hang out, as well.” Goldberg opted not to orient the space toward the non-working fireplace. Instead, she created separate zones by placing a Mitchell Gold daybed in the center of the room enabling multiple conversation set-ups during a party. “At the same time there can be people sitting on one side of the daybed having conversations with people on the sofa and people sitting on the other side can be talking to those on the chairs,” says Goldberg.

When it comes to bookshelves, think outside the box.

The homeowners already had two large bookcases, yet Goldberg was wary of drawing too much attention to them. “I wanted them to have a design feel and not take the focus away from the room,” says Goldberg, who decided to turn the books around so the spines were not exposed. That way attention can be directed to the stunning leather, wood, and brass Palecek chairs and the room’s rich architectural details. “With the books turned around, the shelves become a very tonal, secondary feature. If we filled them up with lots of tchotchkes it would take away from the cleanliness of the room,” says Goldberg. She also framed pages from vintage books for the shelves, which add subtle interest.