How to Make Your Rental the Envy of All Your Friends 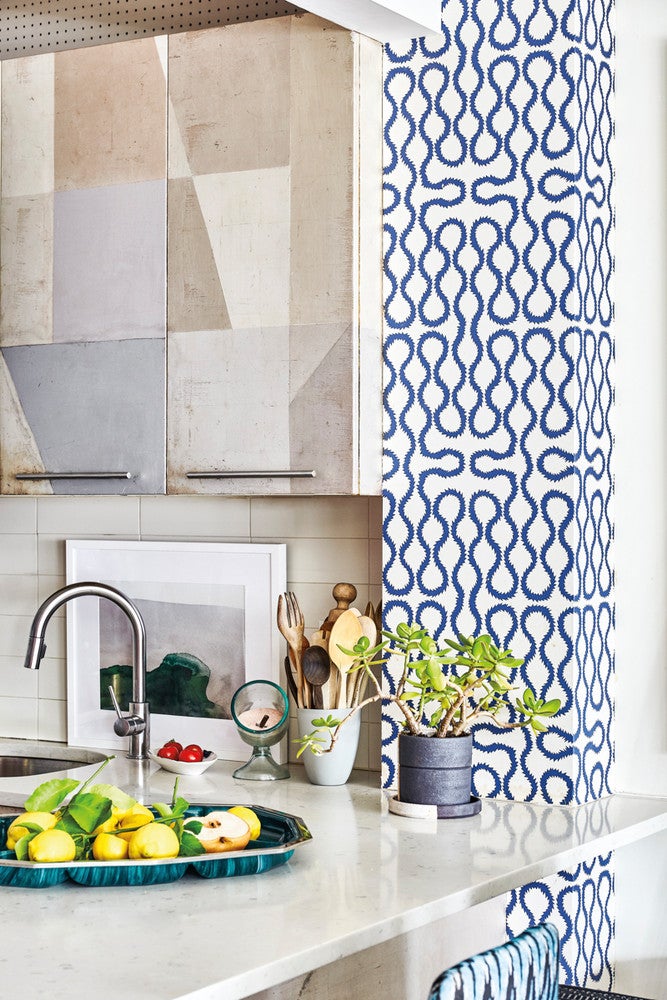 The first thing Olga Naiman did when she moved into her Brooklyn condo was to cover the bare, bland walls of the narrow entry with a floor-to-ceiling Fornasetti wallpaper and bright pink curtains to match. “I wanted each room to have a distinct color imprint, a different feeling,” notes Naiman. The interior designer and prop stylist, who is the mastermind behind spaces featured everywhere from Anthropologie to Vogue, has a background in theatrical set design and channels her work as a major source of inspiration in her own home. “On a set, you turn a corner and you’re suddenly in a different place,” she explains.

It’s a practice Naiman readily puts into play in her apartment, which she shares with her partner, Michael Smith, and 3-year-old twins, Laszlo and Lucia. Color is woven throughout, with hits of pattern cleverly layered in. A hue that stands in as a secondary shade in one room takes decorative charge in the next, and graphic prints add texture and depth. “I would never call myself a traditional designer,” says Naiman. “I love bold decor that comes with moments of magic—everything in my home has symbolism or meaning.”

Read on to get the scoop on elevating your rental with effortless ease.

Naiman approaches her bookshelves as stackable still lifes (and a way to keep items out of reach of her little ones), using each square of the shelving system as a frame. The shelves earmarked to hold decorative accessories are lined with a graphic wallpaper, while the shelves reserved for books are left blank to avoid an overly crowded feel. The loose checkerboard effect allows the eye to move freely from one composition to the next. “It’s an easy way for renters to add depth to a wall,” she points out.

Since an entire kitchen renovation was both impractical and unaffordable, Naiman opted to focus on one standout moment: the cabinetry. Inspired by a wallpaper she saw in an Art Deco exhibition at the Museum of Modern Art, Naiman refurbished the existing oak veneer kitchen cabinets with a graphic color-block boasting a silver leaf detail. The smaller surface means you can splurge on a design that might be too pricey elsewhere.

White walls are a rarity in Naiman’s home. Instead, you’ll ﬁnd panels of vibrant fabrics draped around the space (more often than not concealing an unsightly surface), which she attributes to her roots: “I’m Russian, and Russians love rich textures—especially silk—and fabric on the walls.” In the bedroom, a series of curtains disguise 19 feet of closet doors and a wall-mounted television. “Rather than painting the walls, tack up some beautiful fabric,” Naiman suggests. “When you move, take it with you, and you’ll have curtains for your next apartment.”

Make Your Bed the Center of Attention

Offset a small bedroom with a low-platform bed—the inverse takes up vital real estate spatially and visually—and use nightstands and table lamps as interesting accessories. The cobalt headboard, which Naiman crafted herself after falling short on ﬁnding the perfect one, creates a bold stroke of color. Layering in soft textures, like a leopard-print pillow, is another inexpensive way to incorporate pattern into the space. The ﬁnal touch? “A throw always breaks up the monotony of a bedspread,” says Naiman.

Drawing from elements of photography, the rule of three—or what Naiman refers to as triangulation—follows the idea that the dominant color of a chosen palette should appear within three points of a room: high, low, and at eye level. In her living room, Naiman highlights the turquoise, pink, and blue from a painting, emulating the hues by way of the counter stools, lounge chair, and sofa, respectively.

Use Color to Succeed Pattern

Primary hues set the tone for Laszlo and Lucia’s room (a nook Naiman carved out from the originally one-bedroom apartment). The walls decked out in chalkboard paint act as a grounding neutral—as well as a creative outlet for the twins. “I told them they could draw on any wall that is black!” says Naiman. She skipped big patterns in favor of displaying the children’s art, which, unsurprisingly, is full of color.