For this Southern designer, life is more fun in color. 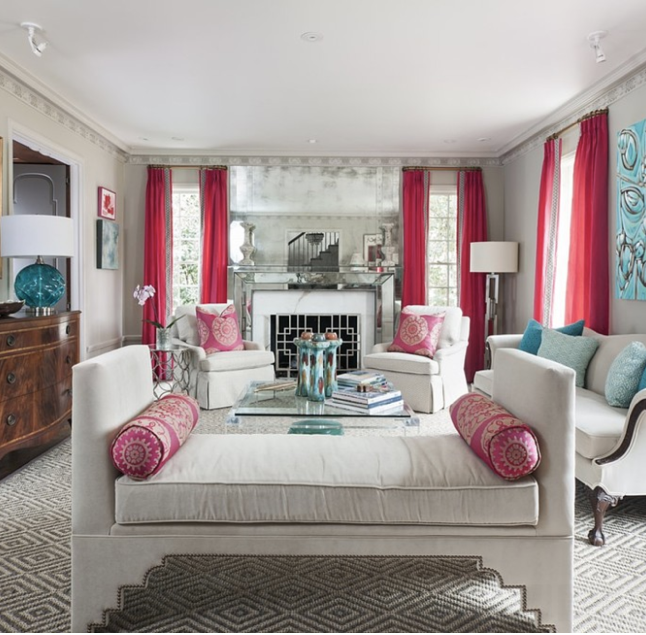 When you’re born on Christmas day, a great nickname is almost a given. So, even if your name is, say, Nancy, all your friends and family might end up calling you Holly. And, of course, Holly Hollingsworth is too charming a name to pass up. It actually stands to reason that Charlotte, NC interior designer Holly Hollingsworth Phillips was born on December 25. Because her designs, bright, colorful and always super chic, are as beautiful as a perfectly wrapped present under the tree. “Color makes me happy,” the designer said. “I love neutral rooms; that’s just not what I personally need.” Fortunately for Phillips, she has a host of amazing role models, namely David Hicks, whose sense of color, she says “absolutely shaped me.” But, even before David Hicks, it was Holly’s mother, noted interior designer Nancy Hollingsworth that introduced her to a love of design.

Even still, she was “dead set” not to take that route and became a fine arts major instead – until she realized that she wanted to be out having fun with her friends, not working and studying all the time. A change to Art History major led to an internship at the Mint Museum, followed by an internship at Sotheby’s. But, it wasn’t until an internship at Atlanta’s Travis & Company design showroom that Holly realized she had found her niche and come full circle to the family business after all. She knew before graduation that she would go immediately back to school for interior design, at Sotheby’s in London, no less. And, even though she learned at the knee of her mother and greatly respects and admires her style, Phillips’ “taste has always been distinctly different from [her] mother’s.” But the mother/daughter co-owner’s of Charlotte’s The English Room have one major thing in common when it comes to their décor: their Southern sensibilities are always infused into their designs. Phillips likes homes that are easy-going, inviting, welcoming, and, of course, colorful. “My clients are young families with dogs and children, and everything we do has to work around that,” Phillips says.