And the $8 frame that makes it gallery-worthy. 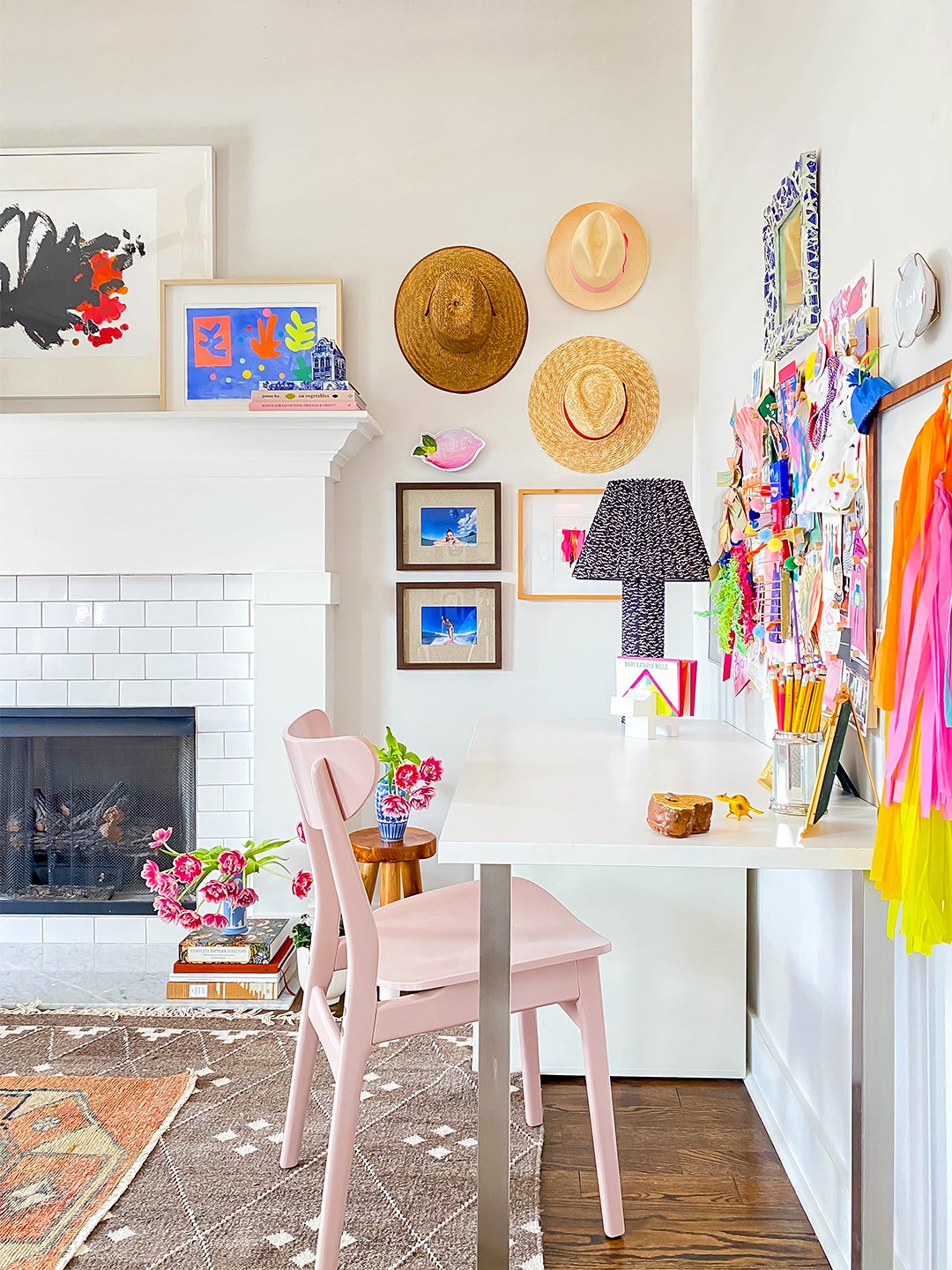 Mary Kathryn Wells wasn’t thrilled with the print she had originally purchased for the blank wall above her living room mantel. “It wasn’t bright and cheerful,” she says. Luckily her eldest son, Wells Vinyard, only 3 at the time, had recently created an abstract piece using a 1-inch-thick foam brush to create bold red strokes. She took the 8-by-11 sheet of paper to a local fine art printer in Nashville and had the piece blown up for around $100. Then she mounted it above the fireplace. “Ninety-five percent of what your kids make you’re probably not going to frame, and that’s fine. But then they do make something, and you’re like, wow, these colors speak to me,” says Wells.

Elsewhere in the home, there are more hyper-saturated creations by the now-7-year-old, along with art by his siblings, 5-year-old Beck, who painted the graphic composition that now hangs over the main bedroom fireplace, and 2-year-old Mary Coco, whose current medium of choice is colorful masking tape. There are even two works in the boys’ shared bedroom that Wells’s music publicist husband, Chris Vinyard, made when he was a kid. “I’m a firm believer that children’s art and amateur art we create ourselves is real art,” she says.

Wells, who recently made the decision to shift her career from public education to interior design, didn’t necessarily set out to fill the 2,500-square-foot home with her kids’ collages and watercolors. Rather it started with a simple need to cover a lot of wall space (something that wasn’t a concern in their former two-bedroom apartment in Hawaii). “Plus we knew we wanted each of our kids to feel seen and represented throughout our home,” she says. Ahead, Wells shares some key tricks for pulling off kid art in every room of the house.

Start With Anything That’s Got Meaning

Wells isn’t a big fan of the preschool hand-prints (even though they’re made with love). “I want things my kids made entirely themselves,” she says. That includes 3-D creations like a mobile her eldest made in pre-K for Mary Coco’s nursery that’s crafted out of painted shells and objects sculpted from clay. “We joked that her room was basically Wells’s and Beck’s first solo gallery, because everything in there when she came home from the hospital was made by one of her brothers,” she says.

Just because your kids’ art is low-cost (well, until it becomes collectible) doesn’t mean you have to compensate with expensive frames. Wells’s go-to? IKEA’s streamlined Ribba frames ($8). And for works with more dimension, like a multicolored pom-pom creation her nephew made, she’ll pick up a simple shadow box from Target. For custom jobs she relies on affordable services like Framebridge, which now lets you add a brass plate to the front of a frame so you can include special details such as quotes and dates.

Designate One Display for Rotation

In the kitchen Wells uses IKEA’s steel curtain wires to hang more casual doodles (she can pin new ones up or take old ones down in a flash). Unlike the classic fridge collage, this clip-on system is a lot more sound than magnets, which typically let heavy paper slide. Traditional bulletin boards also get the job done.

Mix in Your Own Creations and Collections

The key to making kids’ art appear like any other pricey pieces you’d hang in your home is to not relegate it to a playroom or one corner of the kitchen. Instead bring it into all the public spaces and elevate the works by hanging them alongside nonkid creations (three prints by artist Emily Rickard lend a polished look to the collage in the kitchen, for instance). Other unexpected things that serve as art in Wells’s home: personalized letterpress coasters that doubled as birth announcements, Shaka hooks, eBay-sourced vintage postcards, a surfboard fin, beach hats, ukuleles, and a collection of New York Delft plates.

While she usually eyeballs her arrangements, Wells typically starts with the biggest piece, centers it at eye level, and works out on the wall from there to create a lively gallery, leaving around 3 1/2 to 4 inches between the items in a grouping. “I’ve not always done well with imperfection,” admits Wells. “I want my kids to know you don’t always have to get things ‘right’ and art is a great way to show that. It’s messy.”

Here are some supplies she recommends for creating your own family’s mini masterpieces. (Psst: The Tempera cakes are ideal if you want to eventually have their work blown up, as it translates well to larger formats):