The Foods You’ll Be Eating (and Forgetting) in 2017

These are the snacks and drinks we expect to fill up menus, shopping carts, and Instagram feeds this year. 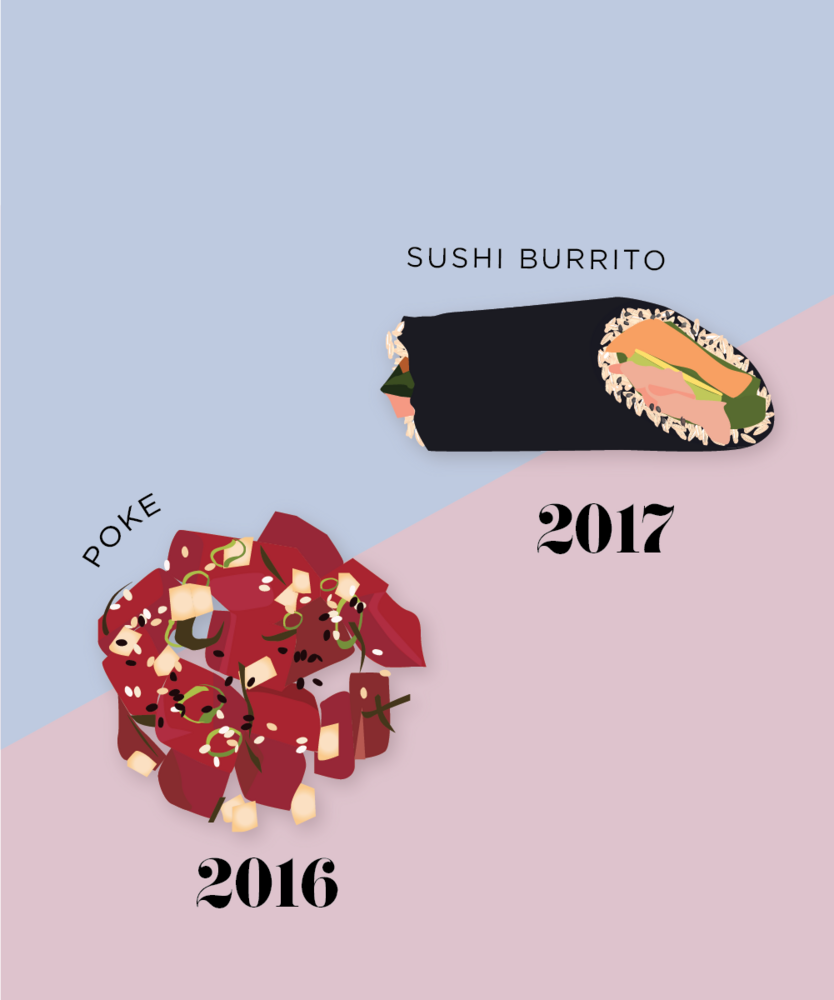 In: Sushi Burritos, Out: Poke Bowls

Utensils will become obsolescent in 2017, at least in the casual consumption of raw fish. Get ready to trade in your poke bowl for a sushi burrito. With new spots opening across the country from LA to Vegas to Boston, expect to have more than a few lunches dining on this handheld food mash-up instead of the poke bowls that were ubiquitous in 2016. Though, you’ll probably still eat some poke bowls too.

Your Instagram feed was undoubtedly attacked by #rainbowbagels this year. Originating at The Bagel Store in Brooklyn, people waited hours in line to snap pictures of their brightly colored breakfasts. While that craze has subsided, it doesn’t mean social media will be any less colorful in 2017. Up next will be the nostalgic embrace of Funfetti, the colorful, sprinkle-studded cake that Pillsbury pioneered in the late ‘80s. Bakers like Momofuku Milk Bar’s Christina Tosi are making the cake hip again, so expect to see more sprinkles soon.

Kale has some competition in 2017. The superfood that wedged its way into snack food aisles, caesar salads, and smoothies may need to make way for kelp. Americans farmers are starting to cultivate seaweed to sell in grocery stores and in restaurants, so you’re likely to see much more of it. And like kale, the marine plant is pretty nutritious, featuring potassium, calcium, and fiber.

Gluten has practically been a curse word the last few years. It got to the point where products that never had the wheat protein in them in the first place proudly proclaimed themselves gluten free. But a backlash to gluten free began brewing a few years ago, spurred by famed Italian chef Marc Vetri who stood up for wheat flour in his op-ed “I’m Gluten Intolerant Intolerant.” The culture is catching up to Vetri and craving pasta again. For example, Google searches for rigatoni have grown 26 percent year over year and are expected to jump more in 2017 as people re-embrace the food they missed when wheat flour was verboten.

We’ve been building to this. In 2016, we saw s’mores M&Ms and s’mores Klondike Bars introduced, but 2017 will be when this campfire mainstay hits its peak. The Girl Scouts will debut its new s’mores flavor this year, meaning an army of young girls will be roving the country peddling the perfect union of chocolate, marshmallow and graham. The childhood classic you’ll see less of this year is red velvet, which has been turned into Oreos, Pop Tarts, donuts, and even vodka. We’d pour one out for red velvet’s decline, but in what could be harbinger for the rest of the red velvet products, it’s getting harder to buy Zing Red Velvet Vodka.

You can always count on the fact that you’ll be imbibing a new weird health beverage each year. Lately, activated charcoal has popped up in ice cream shops and pressed juice bars alike with promises of ridding the body of toxins. Those claims are a little dubious, so charcoal consumption could wane. So what will you drink this year? Whole Foods thinks it will be drinking vinegars, which are supposed to help keep blood sugar down and aid digestion.

In: Cauliflower Rice, Out: Quinoa

Although gluten won’t be as feared in 2017, people will still look to keep their carb consumption in check. For the last few years, they’ve turned to quinoa as a low-carb alternative to rice. But diners are fickle, so they’ll be looking to a new grain alternative. Chopped or grated cauliflower “rice” is a favorite among paleo dieters, and its popularity will undoubtedly grow.

We’ll all be looking for snack-sized treats this year, but without the fuss. So, expect more easy-to-make mug cakes instead of cupcakes. For instance, in the past year, Mug Cakes have seen an 82-percent growth in Google searches, while cupcake searches have been dipping. That’s not surprising how long cupcakes have been popular: It’s been more than 12 years since Andy Samberg and Chris Parnell rapped about Magnolia in Lazy Sunday.