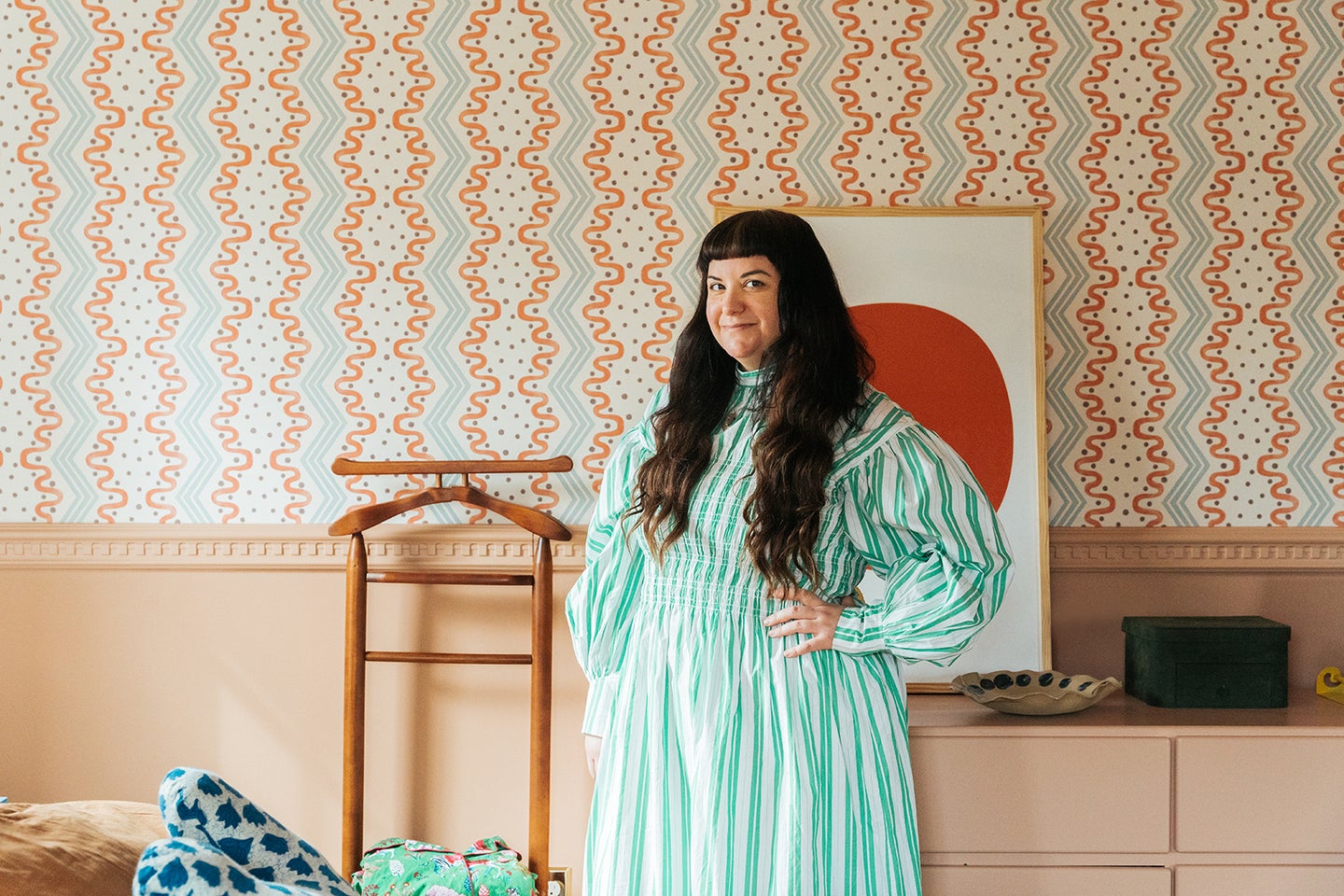 Elizabeth Spiridakis Olson is usually as decisive as they come. The VP of Creative for Food52 likes what she likes, even when it might be controversial. (Have you seen her New Jersey home’s leopard-print stair runner and pale pink dining room chairs?) Yet when faced with the last room in the house that needed a refresh, Olson and her husband’s primary bedroom, suddenly uncertainty took root. “It wasn’t that I didn’t know what I wanted,” she explains. “It’s that the room was so large that I didn’t know where to begin.” (The space is 280 square feet, the size of many NYC studios.)

Enter designer (and friend) Hollie Velten, who was initially brought on solely to solve a storage dilemma: too many clothes and not enough pretty—or functional—places to put them. “Hollie and I have very similar tactile brains, so I knew she could help sort everything out,” says Olson. The creative director’s closetful of voluminous printed dresses became Velten’s jumping-off point, along with a Helen Frankenthaler painting seen during a weekend trip to New York’s Museum of Modern Art—the colors were the palette of Olson’s dreams. Before they knew it, Velten was orchestrating Olson’s entire pattern-heavy bedroom refresh (all four walls are covered in Ottoline wallpaper; her bedsheets are a botanical tie-dye). Here’s how it came to be.

Velten’s first request when starting any project is for the client to think of heirlooms or keepsakes they love from their past. The exercise gets to the root of their personalities quicker and deeper than any traditional style survey. Olson’s choice of chair railing, added for architectural detail in the otherwise plain space, was the exact same kind that accented her childhood home. In this case, though, that fact was unknown to her until her dad paid a visit and commented on the similarities. However, the old-school cornices and matching drapes, brought into the 21st century with a polka dot fabric, were intentionally inspired by Olson’s upbringing. “I love grandma-esque elements, but instead making them playful,” says Velten.

To help the vast room feel cozier, Velten suggested extending the peachy hue that she proposed for the walls onto the ceiling for a cocooning effect. Her trick for not making the space feel too dark: use a slightly lighter shade. “I usually adjust the color by adding 25 or sometimes 50 percent white,” Velten explains. Because colors bounce off each other, using the exact same hue everywhere would create shadows.

Instead of scrapping Olson’s mismatched dressers, Velten had a thought: Why not camouflage them? By painting them the exact same Creamsicle shade (Georgia Peach by Benjamin Moore) as the walls, the storage fades into the background. The eye now naturally wanders to the rest of the room’s treasures—like the wavy yellow tray that holds all of Olson’s perfumes and an old mirror’s updated frame, painted in Charlotte’s Locks by Farrow & Ball; it’s Olson’s favorite spot for selfies.

Stumped by the basic closet doors on the far wall of the bedroom, Olson had initially wanted to tear out the whole system and start anew. “At the end of the day, it wasn’t in the budget,” she admits. “I tasked Hollie with making them at least look good.” Velten cut out the standard shuttered panels and replaced them with cane, bringing a natural texture to the otherwise soft-hued space. The framing’s color, Breakfast Room Green, is another shade pulled from the Frankenthaler painting. Behind the striped curtain in between the storage spots lies more hanging space for Olson’s signature statement frocks—and an oddly placed window she didn’t want to board up.

Velten and Olson were in agreement that the bed needed to be as engaging and inviting as the opposite closet. By creating a headboard that’s almost a full circle, the blue skirted bed frame is chic from every angle. “We knew it was going to overlap the windows, so it needed to come down further than a traditional headboard,” Velten explains. It’s covered front to back in a mustard yellow bouclé suggested by Olson’s husband, so even those on the outside looking in get a beautiful view.