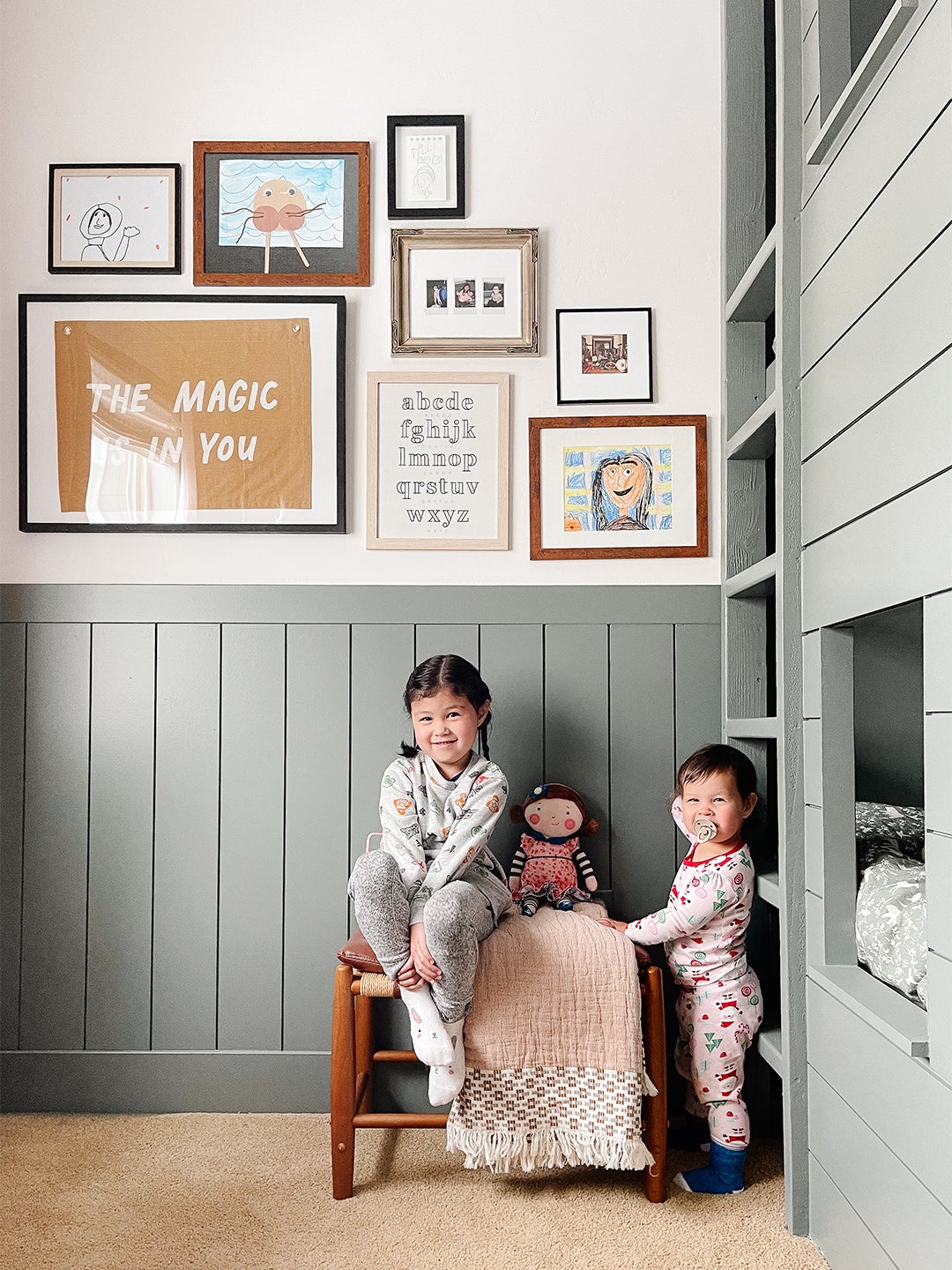 Tiffany Tcheng and her husband, Brandon, just wanted their bed back. The Arizona-based couple’s now-6-year-old daughter, Tilly, had been sleeping in their room for what felt like forever, but when the good times turned into growing pains, Tcheng bought a big-kid bed for Tilly that was designed to look like a house. “We thought it would entice her to sleep in her own bedroom,” says Tcheng. And it worked—most nights at least. But soon, Tilly’s 2-year-old sister, Ona (currently still in a crib in the couple’s space), will join her in her bedroom, so a bunk bed upgrade was a must.

While browsing DIY tutorials on YouTube, the pair came across a guide by DIYer Jen Woodhouse on how to make a homey-looking floor-to-ceiling built-in bunk. Even more handy than the video itself were the plans Woodhouse provided on her website, ready to print and bring the structure to life—including the shiplap facade, little window cutouts, and interior storage. “We’re sitting on the couch, casually watching it, and my husband’s like, ‘I can do that,’” recalls Tcheng. “I looked at him sideways.” Two weeks later, they were at Home Depot buying lumber. “It was full force,” she says. While made with a good night’s sleep in mind, there’s nothing snoozy about this clever renovation. Here’s what they did.

While building the bones of the support structure, the couple hit a hiccup when they noticed that one of the vertical boards wasn’t flush with the wall because of an outlet cover. After consulting Brandon’s electrician father, they decided to chisel the thickness of the outlet into the 2-by-4 using an oscillating tool. They made other slight modifications to Woodhouse’s plans, like drilling holes for interior charging outlets and plug-in sconces.

Tcheng learned the hard way when installing shiplap in the main bedroom to invest in nickel gap boards—beams that already have the groove cut out—to give the wall a polished look. After nailing the paneling to the facade, the pair used a spray gun to paint everything evenly in a custom green color matched by Behr. “It probably took two hours to tape off everything else in the room with tarp, but it’s the way to go,” says Tcheng. Fortunately Tilly was eager to help throughout the process. “She asked a lot of questions, like, ‘What is this used for?’” notes Tcheng. “I really want to show her, you can build things; this is stuff that you can do. It doesn’t show up overnight.”

The semi-enclosed bunks offer interior wall space for useful additions, including a pegboard with baskets that hold the girls’ books and a corner shelf that’s the perfect ledge for an iPad. “It’s great for movie nights and sick days,” says Tcheng. To keep the sun from waking her early risers prematurely, she added curtains to each sleeping nook for a total of $50. And the couple stuck Tilly’s old trundle bed at the bottom of the structure so the mattress can be pulled out when friends or cousins come to stay.

Part of the draw of a ceiling-height built-in bunk bed was that it freed up floor space for other activities. Not pictured: a mini rock-climbing wall and swing chair opposite the bunks. On any given day, Tilly and Ona build a makeshift playground in the surrounding space using their Nugget play cushions. “They’ll climb through the window, slide down the cushions, and just go in circles,” says Tcheng. “Tilly is already asking when Ona can share the room officially.”