Where to eat, sleep, and shop in Dubrovnik and Split. 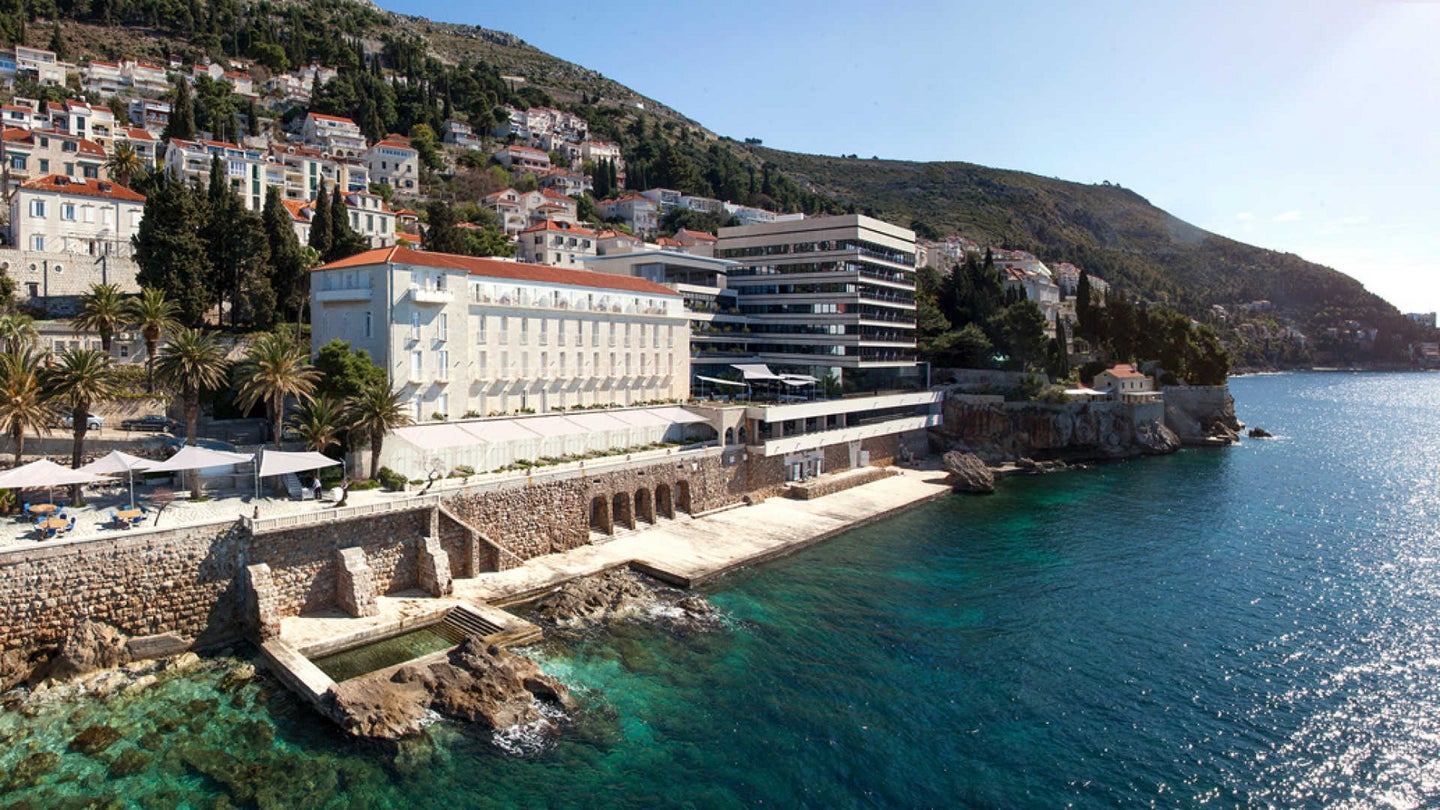 Even on paper, Croatia is truly something special: Take a close look at the small Mediterranean republic on a map, and you’ll notice that the country is shaped like an elegant bird with outstretched wings. Throw in the fact that “the pearl of the Adriatic” is overrun with breathtaking medieval fortresses, dramatic waterfalls, lush olive groves, and postcard-perfect blue waters, and it’s no wonder it’s one of the hottest summer vacation destinations.

Major sights for first-time visitors should include Dubrovnik’s magnificent walls (made famous by Game of Thrones), Diocletian’s Palace in Split, and a boat ride to the enchanting, lavender-filled island of Hvar. In order to give you the best of Croatia, we’ve curated the ultimate itinerary—tapping local insider Alexandra Bozovic Marlais of DT Croatia—to help you best explore this fabled, fortified country.

To start, Bozovic Marlais recommends landing in Split and spending a couple days exploring the riviera town, while simultaneously using it as a gateway to discover the Southern Dalmatian islands such as Hvar, as well as the nearby Cetina River, where freshwater kayaking and canyoning await adventure-minded travelers. Next, head south to take in the jaw-dropping ruins and limestone-paved streets of the enchanting, historic city of Dubrovnik.

With 56 modern rooms (many of which have balconies and floor-to-ceiling windows), a spa, and 24-hour concierge service, there’s no shortage of luxury at this boutique property. During the summer season, take advantage of the hotel’s free boat transfers to Old Town, which is otherwise a 15 minute walk.

It doesn’t get more centrally located than this boutique property, which is built into the walls of Split’s Diocletian palace. It’s an excellent option for those travelers looking for clean, contemporary interiors with a side of UNESCO-approved architecture.

Before it was a restaurant, it was an arsenal where ships were built. “It’s a great spot to sit on the terrace and enjoy coffee, homemade almond cake, and the Adriatic sea breeze while watching the boats sail in and out of the city harbor,” explains Bozovic Marlais.

Bosanka 20207 Dubrovnik For the best local cuisine, head to Konoba Dubrava. According to Bozovic Marlais, “They prepare an incredible version of the traditional Croatian meal of peka, which is a blend of meat and potatoes slow roasted under an iron bell lid (‘ispod čripnje’) over hot coals.”

Located in a side street of Old Town, which is safely tucked away from Dubrovnik’s tourist-filled main square, you’ll find a carved rock wall, wood furniture, as well as award-winning bottles of wine produced from the Matuško’s family’s Plavak Mali grapes. “Don’t leave without tasting the Red Dingac Royal,” Bozovic Marlais advises.

The Sare family has been farming oysters for decades in the Mali Ston Bay, which is about one hour north of Dubrovnik. A few years back, the family opened Restaurants Bota Šare in the old city of Dubrovnik. Don’t miss the fresh oysters the family brings in daily. The fresh Adriatic tuna—which is prepared in a variety of ways, from simply grilled to marinated in a mixture made with Croatian white wine—is another must-try.

With locations throughout Croatia, be sure to leave room in your suitcase for a few (dozen) bottles of black truffle olive oil from this popular oil bar, which specializes in producing olive oils from the island of Brač. Also excellent? The rosemary sea salt and grappa (rakija).

“They have the best Ferrero chocolate cake in Croatia,” Bozovic Marlais says of this 1920s-inspired restaurant located in Split’s beautiful, bustling Prokurative Square.

Rent a daybed, and spend the afternoon sipping cocktails near the azure, yacht-filled waters of Palmizana next to Hvar, which is only accessible by boat.

Skip the obvious trip to Banje beach (the closest beach to Old Town), and head down the road to this more off-the-beaten-path hideaway. Although you’ll have to scale 150 stairs to reach this remote gem, in return you’ll be privy to some of the best views of Dubrovnik and plenty of local people watching.

It’s not often you get to see the world’s best DJs perform inside a 16th-century fortress. Previous artists to perform at this legendary venue include everyone from English DJ Fatboy Slim to German Grammy Award-winning DJ Paul Van Dyk.

Rent a daybed, and spend the afternoon sipping cocktails near the azure, yacht-filled waters of Palmizana next to Hvar, which is only accessible by boat.

Life According to KAWA

From Startas sneakers to hand-painted porcelain plates by local artists to a selection of ties (fun fact: the necktie was originally invented in Croatia), there’s no shortage of novelty items at this quaint, upscale Croatian concept shop. We suggest picking up a copy of What’s Cooking in Dubrovnik and a locally-made limestone mortar and pestle for the gourmand in your life.

Avoid Split’s kitschy souvenir shops, and instead head to Croata where a diverse range of handmade silk scarves and neckties await. History buffs will also appreciate the shop’s necktie museum, which gives an overview the role the necktie played in Croatia’s local customs.

Placa 2 Dubrovnik The country’s oldest working pharmacy (and the third oldest working pharmacy in Europe) is located in the Franciscan Church and Monastery in the center of Dubrovnik’s Old Town. The pharmacy produces creams and tonics according to centuries-old recipes using all-natural ingredients. Products include lavender-infused hand cream and hydrating wrinkle creams made of rose water.