No heat, but lots of canvases for paint. 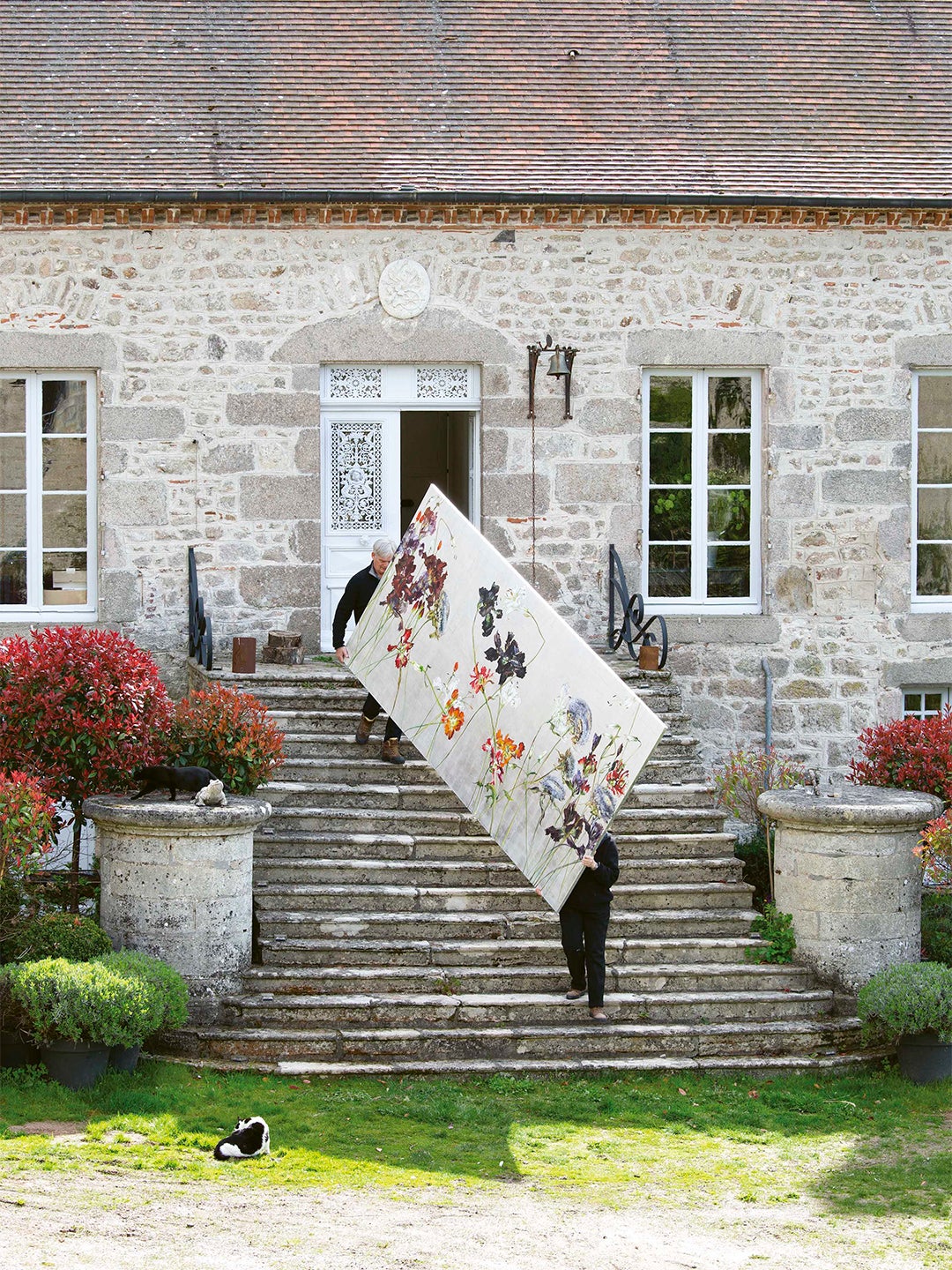 When Claire Basler was 12, she had an epiphany in a Gothic palace in Avignon, France. While other youngsters might have been tugging at their parents’ sleeves, begging for early release from sightseeing at the Palais des Papes, Claire was immovable inside its 14th-century walls. Enveloped on all sides by a panorama of ancient frescoes covering the walls of the late Pope Clement VI’s private study, the Chambre du Cerf, she was overcome: “I had the strong impression that I was not just looking at the painting, but was part of the painting.”

Claire’s unique view of the world was inherited from her parents. Her father, French modernist architect Jean-Jacques Basler, and her mother, Bernadette Basler, refused to subscribe to the trends of their time. Growing up in a small village in rural France surrounded by fields and forests, [her father] developed a passion for wildflowers. Claire remembers: “When I was young, it was very fashionable to have structured, stiff bouquets, and yet he would make massive, exuberant floral creations.”

Claire established her first painting studio in 1977, in a small attic space. Almost 20 years later, she set up her home and studio in a disused factory boiler room in Montreuil, Paris. It was there that she began observing flowers in new ways. “Thanks to the zenithal light from a transparent roof, I learned more about the structure of flowers and the way they fit together and their logic,” she says.

When Claire and [her partner], Pierre [Imhof], purchased Château de Beauvoir in 2011, it had no hot water, heat, or electricity, but it did provide them with a joint project that would be ongoing for the foreseeable future. The property seemed perfect, with rare trees and ample space for areas of soft grass and clover. There was also a greenhouse and large additional buildings, including former stables, which would provide Claire with a studio and exhibition spaces full of natural light. Pierre, a passionate builder with skills in welding, carpentry, masonry, and electrical work, made plans to embark on a three-year restoration of the castle.

The reality of life in a castle initially proved brutal. In October 2011, soon after the couple moved in, the weather took a dramatic turn. With the temperature hovering between -5 and 15 degrees, they were confined to two rooms and the studio was rendered unusable. The upside of being unable to work in her studio was that Claire felt compelled to start painting on the interior walls of the rooms they inhabited.

Now murals enliven almost every room, with nature the singular theme. Claire’s belief in nature as healer, muse, and protector is expressed in each work and in the interiors of the château. With her paintings as the backdrop, she installs bold floral arrangements, often using the same flowers as those depicted on the walls. Viewed in the half-light of early morning or in the dying light of a winter’s dusk, the painted and the real become one.

Much like Claire at the Palais des Papes as a girl, houseguests often feel they are inside her work. Traditional concepts of the viewer and the participant, and the blurring of lines between outdoors and in, transport visitors to a more wonderful world. Claire’s dream of existing not with her paintings but inside them has been achieved, and she shares this dream with others.

Adapted from A Room of Her Own: Inside the Homes and Lives of Creative Women by Robyn Lea © 2021 Thames & Hudson Australia Text and Photography © 2021 Robyn Lea Reprinted by permission of Thames & Hudson Inc. www.thamesandhudsonusa.com