We Can’t Stop Talking About This Vibrant, Joyful Austin Estate—Take a Look

Inspired by its Mexican roots. 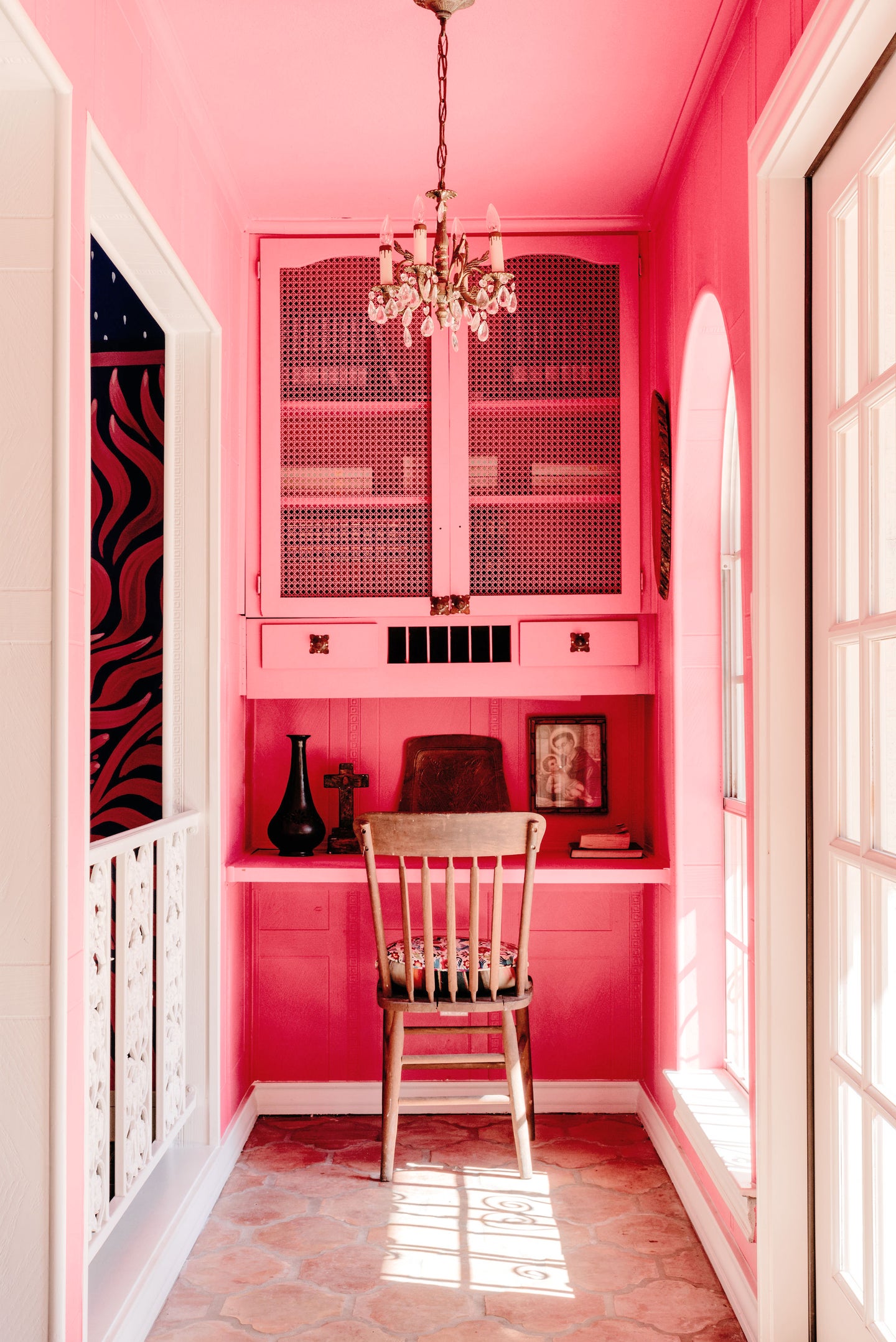 From the oversized, boldly colored mural to seven outdoor patios and authentic decor sourced from Mexico, Casa Cartel is the ultimate luxury rental. Built in the mid-1970s by Austinite Abraham Kennedy and renovated over a 20-month period by designer Chris McCray, founder of McCray & Co., and Jantzen Matzdorff from TLC’s “Flip That House,” the 6,000 sq.-ft. home has a palpable sense of magic.

“We had a photoshoot here the other day and when people went to leave, they started crying—saying it was the best space they had ever been in,” recalls Matzdorff.

Taking the home from its less-than-ideal pre-remodel state—there were two feet of water flooding the basement—to the time capsule it is today took around-the-clock work, dedication, and heart. “You can throw money at something and it’ll turn out okay, but we gave it our all,” says Matzdorff, who now lives in the home when it’s not rented out. “We went to Mexico to understand where the [former] family was from and why [the home] was built so extravagantly.”

advertisement
“As you look down the hallway, you get peeks of the mural, but until you walk into the living room you don’t get the full scale and detail of it.”

The grandest room, the living room, which opens up to the library and elaborate courtyard, makes quite the statement—with a multicolored 20-foot high mural from street artist Curiot Tlalpazotl, which McCray likes to describe as Aztec and Mayan-influenced, but done in a more mystical way. Painted over a course of three days, the entire mural was freehanded in shades of electric blue, hot pink, and golden yellow, and according to McCray is one of the biggest moments of the house.

That same pink continues into the library, making a natural procession toward the outdoor area—with its fountain-like swimming pool. “As you look down the hallway, you get peeks of the mural, but until you walk into the living room you don’t get the full scale and detail of it,” he says.

With more than 90 percent of the home’s art, furnishings, and finishes coming from Mexico, it was important to the team to respect “the heritage and authenticity of the home and the pieces that were left here—and to think about how the family would’ve used each space,” McCray adds.

Leather chairs inspired by Mexican-born architect Luis Barragan and a 1970s-style couch recovered in white boat vinyl provide a comfortable place to gather, while the antique coffee table from Monterrey, black Saltillo tile, and stunning chandelier original to the home, round out the living room. “It was also important for us to create spaces for meaningful connections,” Matzdorff says.

During the 1970s, the house was the place to be for Austin’s politicians, creatives, and educators. Remnants of its entertaining past were very much apparent when Matzdorff purchased the property. “There is an inside bar and an outdoor covered bar that were linked up to the same kegerators. Dollies were left around, which were meant for carrying alcohol,” he remembers.

While the home’s size reflects its original intended use for hosting large numbers of people, it’s the naturally open layout unusual to the 1970s that sparked Matzdorff and McCray’s interest. “The house was ahead of its time,” Matzdorff says. “The guy who built it, Abraham Kennedy, didn’t even have a high school education and didn’t work with an architect. He drew it back when the city would let that kind of thing fly.”

Kennedy’s own boldness in his decisions continuously inspired Matzdorff and McCray during the renovation. The kitchen was completely gutted and updated for large groups and parties. Now, there are commercial-grade appliances, two dishwashers, a wine refrigerator, poured-in-place concrete counters, and tiles from Clay Imports which were made in Mexico, along with posters and calendars from Kennedy’s restaurant, El Gallo, which shuttered in 2017 after 60 years in business.

Because of the size of the home, Matzdorff and McCray realized they’d also need an incredibly large dining room table, one that would seat 16 to 18 people, and found the perfect option outside Monterrey in a single slab of wood measuring nearly 11 feet in length and taking 10 people to carry.

In the foyer, another Tlalpazotl piece makes an appearance, this time enwrapping the staircase. “You’ll notice that there are faces in the mural that start off at the top of the stairs, but as they come down the stairs they increase in size,” McCray says. The staircase, another major focal point in the home, features a rail of white-painted iron with intricate floral detail, floral-inspired blue-and-taupe tile, sapphire carpeting, and a fountain that was original to the home.

advertisement
“The guy who built the house, Abraham Kennedy, didn’t even have a high school education and didn’t work with an architect. He drew it back when the city would let that kind of thing fly.”

Upstairs, walking into the master bedroom is like walking into someone’s private quarters. Portraits of the Kennedy family adorn the walls with the original bed. Gold chairs, crucifix, and lighting remain intact. “We added a raspberry-colored platform with a subwoofer underneath the bed,” McCray says. “That, along with the carpeting makes it so you end up in this place mixing old and new and it’s unexpected, but it just works.”

The master en-suite is one of the areas in the home that pay homage to the pure decadence of the 1970s, something that was important for Matzdorff to restore. In it, a circular marble tub with a pair of angel wings creates an Instagram moment McCray is proud of.

In the guest rooms, the team made sure to infuse each with its own personality. While there are no themes attached to them, one could be called the “bullfighter’s room” with a hand-carved wooden bedframe, vintage bullfighter posters, blue-and-green carpet, and collected textiles.

Noticeable in each room of the house is religious iconography as well, something that the pair struggled with during the remodel. “There was a crucifix in each room,” McCray says. “But, we kept much of it because it was true to the original house and how the family would’ve lived.”

The downstairs powder room—the only bathroom accessible from the hall—is one of the owner’s most beloved small spaces, bursting with pattern and texture galore. White, blue, and red tile tie it to the nearby guestrooms, while a clear shower keeps the room as open as possible. “In this room, especially, we developed workarounds. We purchased a sycamore slab and wanted a vessel sink but dropped it only partially through.”

And for guests craving a little solo time or a movie-night-in, there’s even a basement cinema that seats 15. This home’s magic is all the details, from the family portraits that hang in the hallway to the carefully curated bookshelves filled to the brim with antiques. It’s all about giving people a chance to explore and “a chance to live much larger than they normally would,” Matzdorff says.

How to Make a Bold Entryway

The California House That Makes Bold Its Business

This Bold Houston Home Is An Art Lover’s Dream