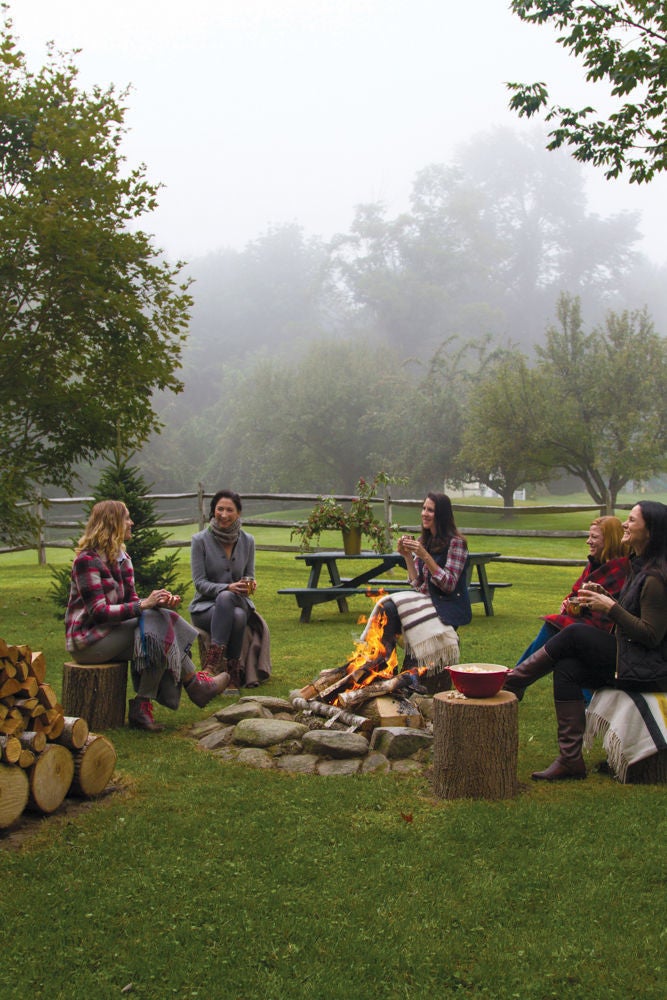 The hostess, pastry chef, and other guests enjoy the last hours of daylight around the crackling bonfire.

Jasmin and Bullock-Prado (along with the pastry chef’s goose, Mama) share a laugh beside a nearby barn.

rural perception Embracing the changing of seasons, and the small window of time in the early winter before outdoor Vermont get-togethers become truly challenging, Julie Jasmin invited several friends to her White River Junction home for cuisine and conversation around an intimate fire pit. Jasmin wanted the decor to match the environment, so she focused on natural materials and colors for her tablescape: a fresh coat of Essex Green paint by Benjamin Moore on her rustic picnic table set the perfect scene for Gesine Bullock-Prado’s warm goat cheese fritters and heavenly bacon tarts. Guests drank warming red wine poured in copper Moscow Mule mugs while snacking on savory kettle corn, creamy budino pudding, and rich s’mores brownies. In addition to the cozy atmosphere, Jasmin provided a collection of buffalo check and Hudson Bay striped blankets for her friends to wrap up in as the night grew colder. “When guests are toasting to friendship, eating every tiny crumb on their napkins, and adding logs to the fire, I have not only captured my vision, but also created memories that warm my heart,” says Jasmin.

INGREDIENTS For the fritters:

Poke holes in the potatoes, all around. Wrap in a single, damp paper towel. Microwave for 5 minutes on high. Flip over and microwave for 5 minutes more or until tender. Do the same for the second potato. While they are still hot, cut the potatoes in half and scoop out the middle into a 1-cup measuring cup. You need 1 cup of packed, cooked potato. If you need more, microwave the third potato to make up the difference. Run the 1 cup of potato through a potato ricer and smash with a fork.

In a bowl, whisk together the eggs. Add the potato and stir vigorously. Stir in the corn, yogurt, salt, and pepper and add 2 tablespoons of all-purpose flour until a thick batter forms. If the batter is runny, add the third tablespoon of flour.

Spray a nonstick pan with cooking spray and heat over medium heat. Drop 2 teaspoons’ worth of batter in the pan for each fritter, pressing down to make a round of 1½ to 2 inches. Fry until golden brown and then flip the fritters and continue frying until golden brown on the other side, about 1 to 2 minutes on each side.

Toss the tomatoes, balsamic vinegar, and olive oil together in a small bowl. Season with salt and pepper to taste.

Crumble or smear about a teaspoon of goat cheese on a fritter and then top with tomato along with a basil leaf.

In a heavy skillet, add the olive oil. Heat over medium-low heat. Add the onions and apples. Sauté over medium heat for 5 minutes and then add maple syrup and cayenne. Continue to sauté until caramelized, about 15 minutes. Season with salt and pepper. Set aside.

Unfold the puff pastry sheets and cut three strips along the fold marks. Cut each strip in half. Dock the individual rectangle (using a fork, poke holes in the puff pastry) and divide evenly among the sheet pans. Bake for about 5 minutes or until the pastry puffs and just starts to brown.

Add 2 slices of potato to each pastry rectangle, leaving a small amount of the edge exposed. Divide the onion/apple mixture among the pastries and return to the oven to bake until the pastries are deep golden-brown. Divide the cheese among the tarts and briefly return to the oven to melt the cheese. Break off the bacon, sprinkle over the finished pastries, and garnish with a small amount of thyme. Serve warm.

In a small bowl, whisk together the cocoa powder, flour, salt, and baking powder.

In a heavy-bottomed saucepan, combine the butter, both sugars, the bittersweet chocolate, coffee, and vanilla. Stir continuously over low heat until the butter, sugars, and chocolate have completely melted and slightly thickened. Remove from the heat while continuing to stir for 30 seconds to dissipate some of the heat.

Remove the brownies from the oven and increase the heat to broil. Sprinkle the tops of the brownies with the mini marshmallows and brown under the broiler for a few seconds.

In a large, heavy-bottomed pan with a lid, heat the oil over medium/medium-high. Add 3 kernels of corn and once they’ve popped, add the sugar and cayenne pepper and stir constantly until the sugar starts to melt. Add the remaining popcorn kernels and continue to stir constantly until the first few kernels start to pop. Add the lid and continue popping over the heat, shaking the pan back and forth constantly (NOT up and down) until the popping slows down. Take the popcorn from the heat, continuing to shake the pot all the while, and transfer the popped corn to a large bowl. Continue shaking the pan, otherwise, the sugar will burn. Season with salt to taste.

INSTRUCTIONS Place 10 small jars of 4 to 5 ounces or demitasse cups on a sheet pan and set aside.

In a large saucepan, bring the half-and-half to a simmer.

In the bowl of a stand mixer fitted with the whisk attachment or in a large bowl, whisk together the egg yolks, brown sugar, cornstarch, vanilla, and salt until very smooth. Slowly and carefully, pour the hot half-and-half into the yolk mixture, pouring the half-and-half down the side of the bowl and making sure to whisk constantly. Once everything is combined and smooth, return the mixture to the saucepan and whisk constantly over medium heat until the mixture thickens to the consistency of thick mayonnaise, making sure not to allow the mixture to boil vigorously.

Immediately fill each prepared jar/demitasse cup about half to three-quarters full. Add the chocolate to the remaining budino/pudding in the saucepan and stir until melted. Divide the chocolate budino among the small jars and then cover each with a small amount of plastic wrap, making sure the plastic wrap touches the exposed pudding so a skin doesn’t form. Refrigerate until cool and set, about ½ hour to 1 hour.

Whisk together the heavy cream or whipping cream and the confectioner’s sugar until you achieve medium/stiff peaks. Top the cooled puddings with the whipped topping and serve.