Why BUREAU is the trendy new multifunctional office space you should know about. 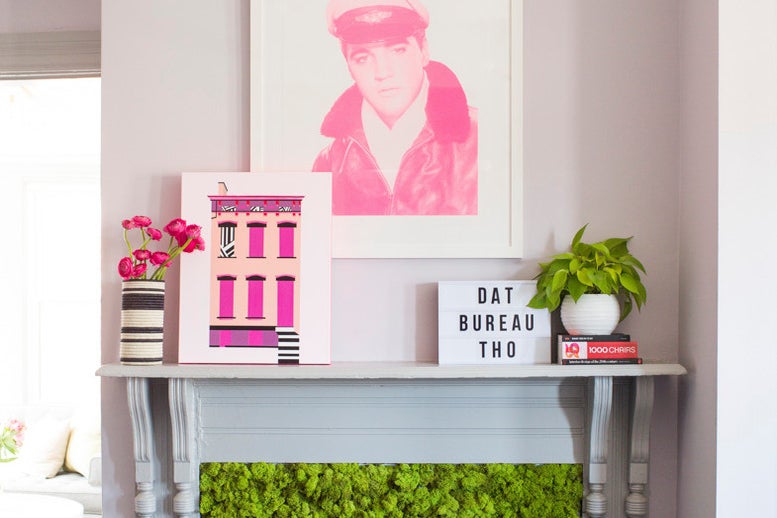 BUREAU isn’t your typical coworking space. Instead of a sterile, corporate-feeling office environment, the DC-based space is colorful, fresh, and full of tons of personality. And that’s evident starting with the website, which markets the boutique office as a “badass coworking and event studio”.

Another way this space deviates from the norm? It’s the brainchild of Kerra Michele Huerta, founder and lead designer at Kerra Michele Interiors and blogger at Apartment Envy—meaning that in addition to functionality, style and design are kept at the heart of Bureau.

In the lead image: “Crazy About Elvis” print by Tim Oliveira, $53; House painting by Chase Mendelez

In this image: Lucent Lightshop Vortice Chandelier via Etsy, $599;

“Fate? Just kidding,” jokes Huerta when asked about what influenced her to launch the company. “My interiors business was growing and I had been looking for a studio space for my team for months. I tried to think of a way to make it work, and thought about all my creative female friends who work from home who could use the space. After talking to a lot of female enterpreneurs in the area, I realized there was a void that needed to be filled, so I filled it!”

Now, the recently-renovated—as of April 2017—space accomplishes just that. In addition to providing a working space, BUREAU also doubles as a private event space, thereby fostering a community and support system of female entrepreneurs.

advertisement
“It’s extremely important for women to stick together and push each other to our highest potential, and I’m so proud BUREAU can be a catalyst for this type of important relationship building,” says Huerta.

We spoke to BUREAU’s original ‘badass’ entrepreneur to learn more about what goes into designing such a multifunctional space.

What was your design inspiration for the project?

I was really inspired by contrast. I feel like as a person and as a designer, I am known for being strong and bold, yet sensitive and empathetic. I wanted the space to be dynamic to reflect the complex individuals who would spend their working hours here, so I was drawn to mixing pastels and neons together for unexpected contrast.

How would you describe the look of the finished space?

It’s bright, crisp, and inspiring with a balanced blend of softness and boldness. For example, there are moments where you’ll see a neon yellow chandelier hanging above pastel pink chairs, or moody floral wallpaper behind a bright neon light. The complex design style is very reflective of the complex women who are here every day.

In this image: Artwork by Kristin Gaudio Endsley

When conceptualizing the co-working space, what did you want to make sure to include? Who were you designing for?

I wanted to make sure I was creating a space that would be appealing to women who actually enjoy working from home, but were looking for a collaborative clean space that gave them an option for comradery. As a result, the studio feels like you’re in your best friend’s beautiful apartment, without the errands to run or dishes to do. You can just focus on what is right in front of you.

In this image: Lady Painting by Juniper Briggs

How did you blend functionality and style in the space?

Since I am a serial renter, and this is once again a rental space, I had to make smart decisions about design and layout that would be super functional, but also feel warm and inviting to women spending their time here during the day.

I divided the studio into separate spaces to allow women to work alone, in groups, or have private space if needed. I also selected pieces that were very neutral and useful in multiple capacities, such as the white lacquer tables. Being a coworking space by day and event studio by night, we need to be able to transform the space—whether for a workshop, launch party, book signing, elopement, or happy hour.

Can you speak to how your background as a designer informed the design of BUREAU?

I’m known in the design industry for my warm eclectic spaces anyone can walk into and immediately feel comfortable. My experience creating inviting spaces led me to create a space that is comfortable for all the women who work here during the day, and is perfect for the general public to enjoy during events.

Were there any challenges with creating the space?

I was really limited by the fact that the space is a rental because I couldn’t make many permanent changes, and everything I did had to be approved by the landlord. I really wanted to paint the floors high gloss white, but the landlord wouldn’t let me. The hardwoods were so old and stained that the only choice for staining them was black. The black floors ended up informing my white walls and grey trim choices, which I’m very happy with, but I was definitely limited in my options.

Switching gears a little to your design business, how would you define your personal style? Is Bureau reflective of that or did you want to design something completely different from your aesthetic?

Most of my design projects are residential, so I’m designing spaces people live their personal lives in every day. With BUREAU, I was able to turn up the volume a little bit because it is a commercial space and most people who come in are spending short periods of time in the space. It gave me an opportunity to play with bold patterns and colors on a large scale, something I wouldn’t otherwise have been able to do in a person’s home.

What’s your favorite part of the finished space?

The work table in the bay window. It’s the first thing you see when you walk in the door, and it sets the tone for what you see throughout the rest of the studio. The neon chandelier is hanging above the pretty pink chairs, and it’s very light and bright.