15 striking buildings worth a plane ticket

these architectural masters will take your breath away. 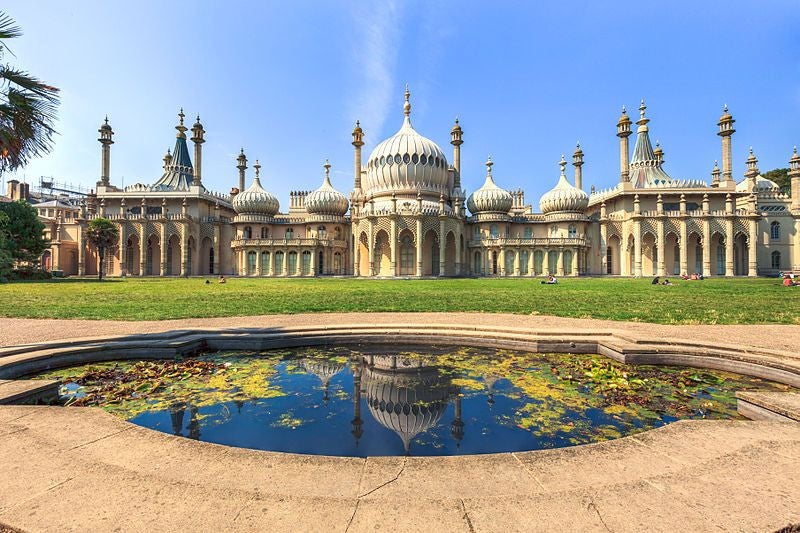 Also known as The Basilica of the Sacred Heart of Paris, this stunning Roman Catholic church is located at the summit of Montmartre, the highest point in Paris. The Romano-Byzantine inspired building took nearly 40 years to build, and still stands as a monument to the Catholic religion.

With its location on the top of the highest hill in Paris, the basilica boasts breathtaking views of Paris. And, the surrounding neighborhood of Montmartre is famous for the slew of artists who worked there in the beginning of the 20th century. These artists include Salvador Dalí, Pablo Picasso, Vincent Van Gogh, and Claude Monet. It’s a perfect spot for art lovers to visit.

This 19th century castle was built for King Ludwig II of Bavaria as a retreat from public life. The king wished the castle to be a romantic interpretation of the Middle Ages (the castle is built on top of a medieval ruin) and an homage to his favorite composer, Richard Wagner. The castle is best known as the inspiration for Disneyland’s Sleeping Beauty’s castle.

Today, an estimated 1.4 million people visit the castle every year. If you tour the inside of the massive structure, you will find hundreds of opulently decorated rooms, many of which were preserved from the 19th century.

Also known as Tiger’s Nest Monastery, Paro Taktsang is a well-known Himalayan Buddhist sacred site and temple. Built in 1692, the temple is built on the site of a cave where it was said Guru Padmasambhava meditated for three years, three months, three weeks, three days, and three hours in the 8th century.

Built on the side of a cliff, the monastery is only accessible via three paths on the mountain. Tourist are allowed to visit the meditation site, although they must either walk or ride on horseback to the summit. By foot it takes 2-3 hours to reach the temple.

This $2 billion structure is the third tallest hotel in the world. Built on top of an artificial island off Jumeirah beach, the hotel is recognized as one of the most famous buildings in Dubai. The architectural structure of the building is meant to mimic the sail of a ship — a possible ode to the island on which is stand.

Inside the 28-double story floor hotel you will find stunning architectural designs, grandiose decorations, and two fully functioning restaurants. Burj Al Arab is also home to one of the world’s most expensive hotel rooms. Known as The Royal Suite, one night in this luxurious room costs $18,716.

Located in Red Square, St. Basil’s Cathedral may be one of Russia’s most well-recognized buildings. Now a museum, St. Basil was built in 1555 on orders from Ivan the Terrible. The design of the building is meant to reflect the flames of a fire rising up into the air. The UNESCO world heritage site is located in close proximity to The Kremlin and Lenin’s Mausoleum, making it easily accessed by tourists.

Now known as the Cybele Palace, this magnificent white buildings stands in the center of the bustling city. It was formerly the headquarters for Madrid’s postal service and acted as the Postal and Telegraphic Museum until 2007. Now, the neoclassical building is the location of Madrid’s city hall. It’s a beautiful structure that is definitely worth the visit.

Perhaps the most famous mausoleum in the world, the Taj Mahal remains one of India’s most gorgeous buildings. The ivory marble building was built in the 17th century by the emperor for his “favorite” wife. A whopping 42-acres, the tomb contains a mosque, guest house, and formal garden area.

The designated UNESCO world heritage site is said to be “the jewel of Muslim art in India.” The architectural masterpiece has garnered worldwide recognition, and it sees 7-8 million visitors a year. Throughout the mausoleum are vibrant colors and intricate patterns, well-known characteristics of Muslim art.

Designed by Spanish architect Antoni Gaudí, the unfinished Catholic basilica stands as one of the world’s most unique creations. A UNESCO world heritage site, construction on La Sangrada Família began in the 19th century and is continued today — as of October 2015, the basilica is 70 percent complete.

The building boasts intricate façade designs, hundreds of religious icons, and four beautiful spires. And, believe it or not, the inside of the basilica (which visitors can see for $17-22), is more beautiful than the exterior. The vibrant stained glass windows and beautiful details throughout the cathedral are a sight to behold.

This hilltop structure is regarded as one of the best surviving examples of traditional Japanese castles. Originally built in the 14th century, Himeji Castle was significant remodeled in the 16th century — although little has changed since then. One of the first UNESCO sites in Japan, the castle survived the bombings of WWII and several earthquakes.

Himeji is the largest castle in Japan — it features 83 buildings and has an intricate defense system. The building is most notable for its brilliant white exterior and winged rooftops.

One of Europe’s oldest legislative buildings, the Hungarian Parliament Building stands magnificently on the bank of the Danube river. The gothic revival building is one of the most breathtaking buildings in Europe. It features nearly 700 rooms, 10 courtyards, and 29 staircases.

Built in the 19th century, the parliament building remains the largest building in Hungary. To date it is still one of the most popular attractions in the city. If you plan on visiting the irrefutably gorgeous building, make sure to view it from the river bank and up close. Its striking architecture is meant to be appreciated from afar — plus, it will make for one striking Instagram photo.

Once the official residence of Russian monarchs, the Winter Palace in St. Petersburg is arguably one of the most beautiful buildings in the country. The marvelous Baroque palace is said to contain 1,500 rooms, nearly 2,000 windows, and about 1,800 doors. The interior of the grand palace is highly decorated in the elaborate Rococo style, although elements of both Baroque and Neoclassical are prominent as well.

In many ways, the palace is reminiscent of Versailles in France, although it was never the intent of the Tsar who commissioned the building to rival the famed French abode. Famed empress Catherine the Great once resided at the Winter Palace. Today, the palace is The Hermitage Museum — the largest art gallery in Russia.

Located on Museum Island in Berlin, the Berlin Cathedral is a splendor to behold. The largest church in the city and the center for the Protestant church in Germany, the cathedral is a beautiful piece of late 19th century architecture. It costs 7 euros to enter the interior of the church, but it’s worth the price. After visiting this striking building, visitors can relax in the gardens or gain entrance into one of the many famous museums in the area.

One of the most famous mosques in the world, Hagia Sophia is considered to be the greatest surviving examples of Byzantine architecture. The building was constructed in the 6th century as a Christian cathedral. The structure remained the largest in the world for almost a thousand years. In the 15th century, the building was converted into a mosque when Constantinople (the historic name of Istanbul) was conquered by the Ottoman Turks. Particularly beautiful is the dome of Hagia Sophia. Adorned with beautiful frescos and colorful mosaics, the dome is a testament to early architectural designs.

Although the Duomo in Florence is one of the most prominent architectural structures in Italy, the Milan Cathedral is definitely worth a plane ticket. The flamboyant Gothic cathedral took almost six centuries to complete and is the 5th largest church in the world. Construction of the extraordinary building began in the 14th century by an Italian archbishop, although part of the cathedrals construction in the 19th century was funded by the French — an effort by Napoleon Bonaparte to finish the cathedral. The incredible structure, finished in the 20th century, is open to visitors from all over the world. We recommend heading to the roof for beautiful views of the city.

The Royal Pavilion was once a royal residence for the monarchs of England. The style was influenced by popular architecture in India. Under Queen Victoria the residence became open to the public and remains a popular attraction with nearly half a million visitors a year. The minarets of the pavilion’s façade give the exterior a romantic composition. The Royal Pavilion is a beautiful place to visit on a day trip from London.