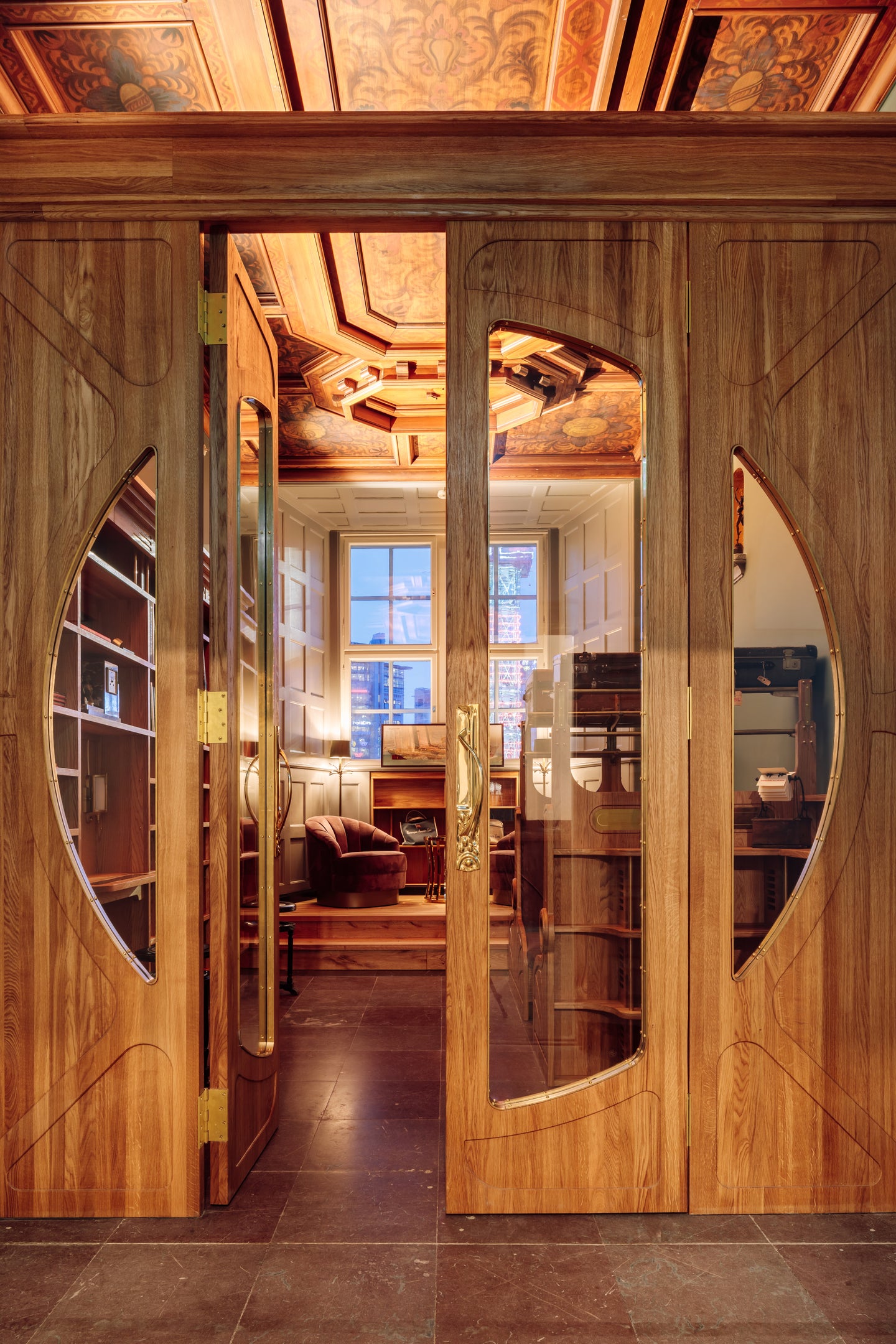 Situated in the heart of downtown Oslo, you’ll find Amerikalinjen, a storied boutique hotel that recently underwent a modern revival. Formerly the headquarters of Norwegian America Line—a cruise ship company founded in the early 1900s—the newly minted establishment’s name is one of the many thoughtful nods to its predecessor.

A full century later, the historic landmark has reopened its doors, following a revamp by Kritt Architects. Starting with the perfectly symmetrical exterior, the property looks like it could have been plucked straight from a Wes Anderson film. Another hint: The exquisitely decorated library and social area, measuring at just over 220 square feet, with oak walls and bespoke furnishings. The color palette in the common areas is also reminiscent of the director’s trademark style: think mustard yellow archways that spotlight a lone velvet bench and lounge rooms worthy of The Grand Budapest Hotel.

Wanting to preserve some of the Neo-Baroque structure’s original features, Kritt bridged old and new by complementing the vaulted ceilings, and ornate grand staircases with of-the-moment Scandinavian design. Modular sofas and hanging blown-glass lights were sourced from brands such as Northern Lighting and Eikund. Many of the hotel’s furnishings are reproductions of classic, mid-century pieces—Torbjørn Bekken armchairs and Birger Dahl Birdy table lamps, to name a few.

In the bedroom suites (formerly the Norwegian America Line’s boardrooms) Helsinki-based studio Puroplan installed smoked-glass mirrors behind the beds to give the sense of added space. Drop-down pendants by Hadeland bring a major dose of Anderson-esque drama to offset the soft blush tones of the window treatments. And in a The Life Aquatic With Steve Zissou moment: All the rooms boast large-paned windows from which guests can even catch a glimpse of Norway’s iconic fjords.

In the center of the building is  Haven, one of the hotel’s four restaurants, which has been transformed into a light-filled oasis complete with a yellow-tiled wall that serves as the ultimate focal point. In the basement, a New York City–inspired speakeasy—named Gustav after the founder of the Norwegian America Line—creates an intimate setting that’s perfect for cozying up with a cocktail in hand. And soaking up the #AccidentallyWesAnderson atmosphere worthy of M. Gustave.